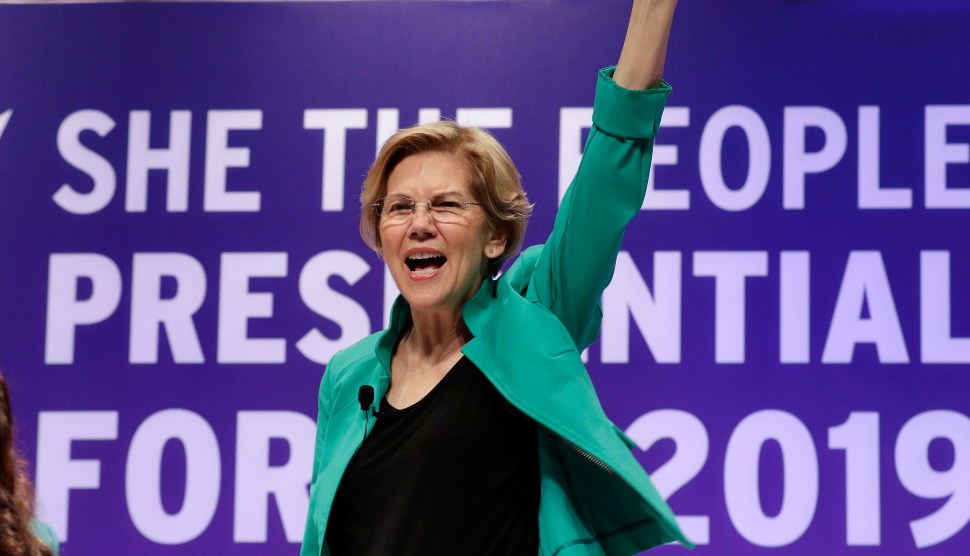 For American women, having a baby is becoming increasingly dangerous. Between 2000 and 2014, the rate of mothers dying during childbirth increased by more than a quarter. Black moms are especially vulnerable—they’re about four times more likely to die while having a baby than white women. This week, presidential contender Sen. Elizabeth Warren floated an idea to decrease our rising national maternal mortality rate: Pay hospitals that prevent moms from dying, and take money away from those that don’t.

“I want to see the hospitals see it as their responsibility to address this problem head on and make it a first priority,” she said at the She the People Presidential Forum in Houston on Wednesday. “And the best way to do that is to use money to make it happen.”

Black moms in our country are dying from childbirth-related causes 3-4 times more often than white moms. Any meaningful solution to our maternal mortality crisis must address structural racism as a root cause of this problem. My new idea would tackle this crisis head on. pic.twitter.com/1YcaVNTedz

It’s an appealingly simple idea, and versions of it have worked in the past. For example, in 2008, the Centers for Medicare and Medicaid Services stopped reimbursing hospitals for costs associated with avoidable problems—like falls in the hospital and infections from dirty IV lines. Over the next decade, hospitals cleaned up their acts: In 2018, the agency calculated that hospital improvements had saved 8,000 lives and $2.9 billion.

But the experts I talked to about Warren’s plan cautioned that her carrot-and-stick approach might be an overly simplistic solution to a vexingly complicated problem. On the most basic level, there isn’t enough data today to determine which maternal deaths can be prevented. Many states still don’t accurately track their maternal mortality rate, and not all hospitals code maternal deaths in a standard way, notes Jodi Abbott, a health disparities researcher at Boston University School of Medicine. This limitation would make it almost impossible to actually implement Warren’s plan fairly.

And, as Monifa Bandele, senior vice president of the maternal and family advocacy group MomsRising, points out, Warren’s proposal does nothing to specifically address the racial disparities of the issue. “Even at well-resourced hospitals, black women experience higher rates of complications, and even among well-resourced black women,” she says.

What’s more, the complications for black women often go far beyond hospitals. As I reported last year, mounting research suggests that the stress of experiencing racism in everyday life may contribute to poor outcomes both for black moms and their babies.

Bandele, who attended the She the People forum and who asked the question that prompted the senator to introduce her plan, also worries that Warren’s idea could take away resources—like doctor trainings and specialized equipment—from hospitals that need them most. “In penalizing hospitals that are doing poorly, we can make a bad situation worse,” she says.

Abbott believes that in order for Warren’s plan to work, it’d need to get states involved, to better support hospitals’ efforts to make childbirth safer. Several states have over the past several years found some success in curbing maternal mortality by forming special committees—called quality care collaboratives—that monitor and improve the quality of care and safety at hospitals. California’s QCC, for example, helped state hospitals implement standard protocols that were proven to treat the conditions—such as hemorrhaging and high blood pressure—that commonly endangered mothers during childbirth. The state cut its maternal mortality rate by 55 percent after it established its QCC in 2006.

So for a plan like Warren’s to succeed, says Abbott, states would need to figure out how to motivate hospitals to adopt these best practices. One idea: Agencies such as state medical boards and the federal Joint Commission, which accredits hospitals, could make the practices a requirement for hospitals to be licensed. “But will these initiatives change the racial differences?” she asks. “That is a major question.”

Bandele says she sees Warren’s idea as the “beginnings of a plan” rather than a fully-formed solution. She notes that the proposal could benefit by pulling from a bill that presidential hopeful Kamala Harris introduced last year in the Senate; it included strategies aimed at making childbirth safer for black women in particular, such as funding racial bias trainings for obstetricians, midwives, and labor and delivery nurses.

For now, without clear incentives in place, it of course remains to be seen whether more states will step up to support hospitals. And the slow pace of progress frustrates Abbott. “If it was 50-year-old white men dying as frequently as black moms,” she says, “hospitals would be shut down until the best practices were implemented.”