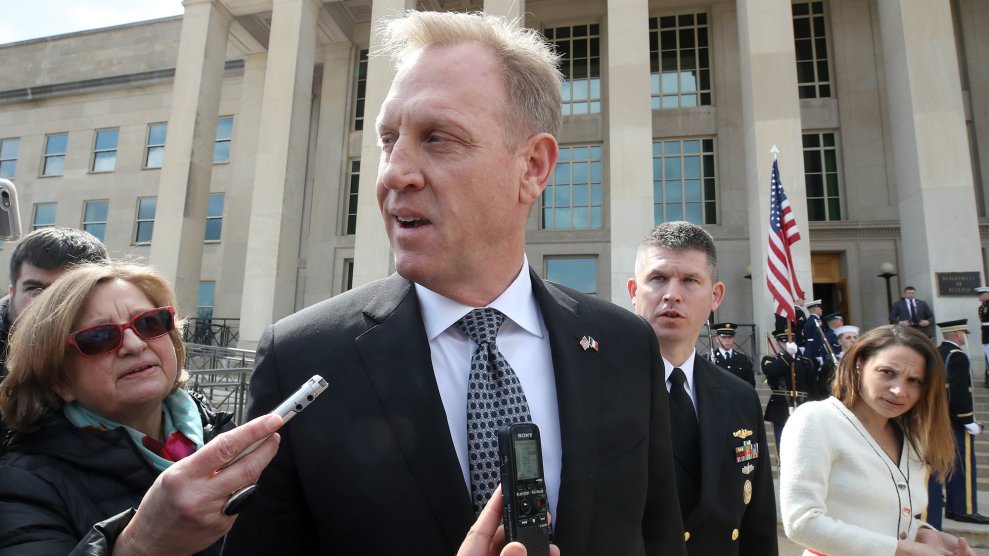 Patrick Shanahan has been acting Pentagon chief for 115 days, longer than any other person in history. Now he may finally be ready to make that permanent.

On Thursday, the Defense Department’s independent watchdog cleared Shanahan of any wrongdoing in an investigation related to claims he improperly favored Boeing, the second-largest American defense contractor and his employer for over 30 years. With an ethics probe no longer hanging over his tenure at DOD, Shanahan will likely be nominated by President Trump “within days to be the permanent defense secretary,” the Wall Street Journal reported.

If confirmed, Shanahan would be the least experienced Pentagon leader since William P. Clements Jr., a millionaire oil baron, who briefly served as acting secretary of defense during Watergate. Shanahan never served in the military or in any government role before June 2017, when Trump tapped him to be deputy secretary to James Mattis. At that point, Shanahan’s only major professional experience had been at Boeing. Tasked with reforming the Pentagon’s business approach and straightening out its books, Shanahan led the department through its first audit and promoted cost savings across the services.

With virtually no experience making war or crafting peace, Shanahan as acting secretary has all but ceded the policymaking function of his role to John Bolton, the influential national security adviser, and Secretary of State Mike Pompeo. For Trump, Shanahan’s greatest professional asset was his expertise as a “good buyer” of military equipment who would have an eye toward saving the government money.

Paradoxically, his greatest asset may also become his greatest liability, since military procurement is where Shanahan’s Boeing background will pose problems.

The 43-page inspector general’s report focused on one particular incident where Shanahan’s desire to root out inefficiencies created the appearance of bias in favor of Boeing. Shortly after joining the department, he reportedly called the costly F-35 fighter jet program “fucked up.” This raised eyebrows because Boeing competitor Lockheed Martin primarily runs the project. Shanahan recalled the incident with a slight but rhetorically significant difference to investigators. What he actually called “fucked up,” he said, was the F-35 “program,” not the aircraft itself.

“There are plenty of reasons to criticize the program,” says Dan Grazier, a fellow at the Project on Government Oversight. “But to make some elemental distinction between the aircraft and the program is a little ridiculous.”

As permanent defense secretary, Shanahan will be less tied to the day-to-day minutiae of defense contracts and weapons monitoring than he was as deputy, but his Boeing ties still raise concerns for senior leaders who have to prevent him from weighing in on issues involving the government’s second-largest defense contractor. The report describes several instances where, during meetings, Shanahan “stopped the discussion” once a Boeing matter was raised. He even ducked out of a conversation with the Air Force chief of staff when their chat started “straying into” a Boeing program, the officer told investigators.

Staying out of those conversations will be hard. The nonpartisan Government Accountability Office, on the same day Shanahan was cleared, released a report documenting the “shortages, repair backlogs, and mismatched parts” that have mired the $1 trillion F-35 program in dysfunction. Each of GAO’s seven recommendations for improvement require action by the defense secretary. Even if Shanahan is speaking frankly about the F-35’s issues, his Boeing experience colors his input.

“It just adds friction to a situation that doesn’t need any more friction,” Grazier says.

One obvious solution would be to nominate someone else without a conflict of interest. (Former Arizona Sen. Jon Kyl and retired Army Gen. Jack Keane both reportedly turned the job down.) But Trump, who installed former lobbyists to lead the Interior Department and Environmental Protection Agency, has shown a preference for leaders with close industry ties, despite the ethical issues raised by those appointments. Mattis, who commanded respect across DOD for his service as a general and his apolitical reputation, considered Shanahan’s business experience to be an attribute. “I didn’t pay him to be a shrinking violet when it came to saving the Government money,” Mattis told the IG’s office for its report. But as defense secretary, Shanahan will be forced to ignore a crucial aspect of the department’s business to maintain an unassailable ethical record.

This setup does not appear sustainable, especially since Shanahan voluntarily extended his recusal for the entire length of his government service. (The normal cooling-off period is two years.) But the field of potential secretaries of defense is not an expansive one, and Shanahan, who has openly expressed interest in the job, might win by default. “You either have to be slightly out of your mind or totally willing to subordinate yourself to work for this administration,” Adams says. “I don’t get the sense he’s out of his mind.”