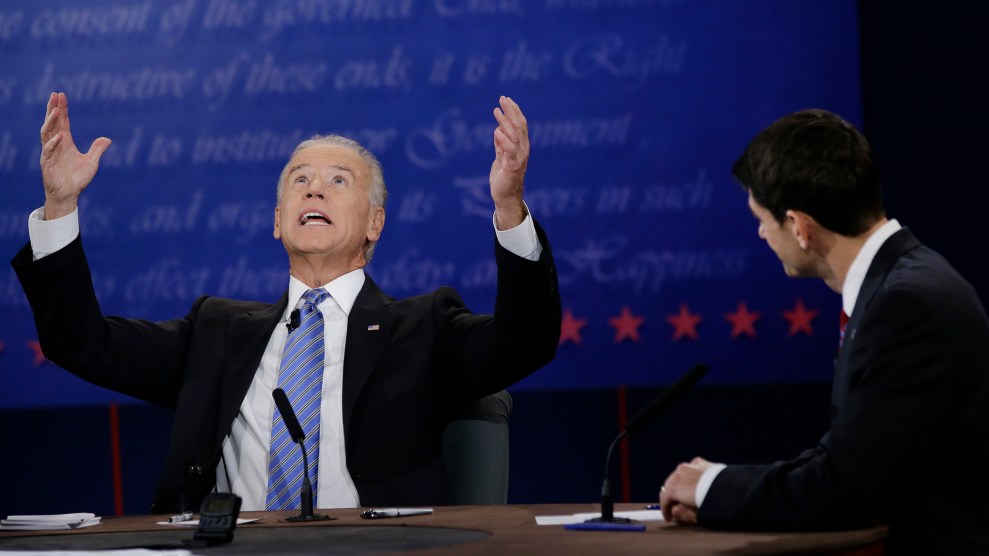 While other Democratic presidential candidates have centered their opening pitches to voters on the policies they support, Joe Biden was focused entirely on one idea in his campaign announcement video on Thursday: the need to defeat Donald Trump. Now Biden will have to convince Democratic voters that he represents the party’s best chance to win the White House. That effort starts in earnest in June, when Democrats hold their first debate, and Biden will try to prove that he can go head-to-head with Trump on the debate stage in the general election.

So what kind of debater is Biden? Fortunately, we have plenty of evidence to draw on. Biden has already run for president twice, in 1988 and 2008. In both campaigns, he debated some fellow Democrats, and as the vice presidential candidate in 2008 and 2012, he squared off against Sarah Palin and Paul Ryan.

As a debater, Biden is nothing like the Republicans Trump faced in his 2016 primary, or like Hillary Clinton, who by most accounts won her three debates against Trump. Instead, Biden elicits emotion like a method actor and laughs openly at his opponents. And with his use of humor to win over audiences and his frequent interruptions of his opponents to belittle and dominate them, Biden can look strikingly like the person he’s hoping to face in debates next year, Trump.

The debates leading up to the 1988 primary were stodgy affairs from a bygone era: a stage full of older men speaking in subdued tones, training their fire on President Ronald Reagan and rarely attacking each other. In August 1987, Biden debated six other Democrats at the Iowa State Fair. He showed flashes of his best debating qualities, including subtle humor and passionate words for down-and-out Americans in the Rust Belt and rural Midwest.

But this was, it turns out, Biden’s most disastrous performance. Not for the style or content—Biden announced that he felt “really good” after the debate—but for the fact that he ended the debate by plagiarizing the UK Labour politician Neil Kinnock. The resulting scandal ultimately sank his campaign.

In 2008, Biden again strode onto the debate stage, already a veteran among a mostly younger pack, including Barack Obama and John Edwards. Repeatedly, Biden used humor to endear himself to the audience and deflect criticism.

In the first debate, in April 2007, moderator Brian Williams raised Biden’s plagiarism scandal and asked whether, with Biden’s tendency to run his mouth, the verbose senator could stay out of trouble. “Can you reassure voters in this country that you would have the discipline you would need on the world stage, Senator?” Williams asked.

The audience laughed. Williams waited to see if Biden would go on, but his silence only drew more laughter.

A few months later, Biden participated in a candidate forum in which he stole the show with humor. First, he poked fun at himself for failing to raise as much money as his opponents, making a pitch for public financing of elections. “The amounts of money we’re raising here are obscene,” he said. Then he added to laughter, “I’m not. I wish I were.”

Next, Biden went on to take jabs at his opponents, eliciting laughter as he went. To New Mexico Gov. Bill Richardson, Biden said leading a state of “a couple million people” didn’t mean he could pull together a nation of 300 million. “That’s like saying I played halfback when I was in high school, I can play in the pros,” he said. Even Richardson laughed.

Then he turned to Clinton. “I love Hillary Clinton,” he prefaced. “I’ve been getting beat up because I’m always saying nice things about her, because they think I want to be her secretary of state.” The audience laughed again.

But it’s Biden’s one-on-one debates that offer a glimpse of how he will take on Trump in the general election. In October 2008, Biden faced Palin in a debate that is unlikely to be a model of how he goes after Trump. Palin had just given a disastrous interview with Katie Couric, in which Palin’s fumbles cast serious doubt on whether she was ready for the role of vice president. “With Sarah Palin, she was an outsider, she was a woman, and because she was an outsider she didn’t have all of the policy positions down pat,” former Michigan Gov. Jennifer Granholm, who played Palin in debate prep with Biden, explained in 2012. “So for him, the challenge was to keep all of the great information he had in his head and have him communicate it in a way that didn’t seem like he was smarter than her, or knew more than her. He couldn’t appear condescending in any way.”

So Biden approached that debate somewhat subdued, making his points soberly and patiently. But at the end of the debate, he showed off his trademark passion in a speech that brought him nearly to tears. “The notion that somehow, because I’m a man, I don’t know what it’s like to raise two kids alone, I don’t know what it’s like to have a child you’re not sure is going to—is going to make it—I understand,” he said. (Biden’s first wife and young daughter died in a car crash in 1972, leaving Biden to raise his two sons.)

It’s Biden’s debate with Ryan four years later that is most illustrative of how he might go after Trump. Barack Obama had just blown his first debate against the Republican nominee, Mitt Romney, appearing subdued while Romney was forceful. So Biden’s job was to bring energy. And he did.

Biden’s biggest weapon against Ryan was his decision to laugh at nearly everything Ryan said. The split screen showed Biden chuckling, shaking his head, and looking to the heavens as Ryan spoke. Biden’s hammy tactics divided critics; some found them arrogant and off-putting, while others called his constant smiling “infectious” and praised the performance as an “alpha-male display.” Vanity Fair explained at the time why Biden’s laugh ultimately won the day: “Every laugh was an audience-participation question: ‘Can you believe this guy?’”

Biden also interrupted Ryan. A lot. Republicans complained afterward that Biden interrupted their guy 82 times. But it was effective. He threw Ryan off his game and undermined the idea that the wonkish Ryan was telling the truth to the American people. When Ryan asserted, for example, that he could cut taxes by 20 percent and still preserve credits that benefit the middle class, Biden did not wait until his turn to throw cold water on this claim. “Not mathematically possible!” he interjected. “It’s been done before,” Ryan protested. Biden smiled into his microphone, “It has never been done before.”

In many ways, Biden’s debate style over the years predicted Trump’s winning performances in 2016. Biden made audiences laugh and mocked his opponents—although with a wink and an “I love the guy, but…” that Trump never had. He shook off attacks with witty ripostes, as did Trump. When he went toe-to-toe with Ryan, he dominated through interrupting. Four years later, Vox counted Trump interrupting Clinton 51 times in their first debate.

Biden is entering the Democratic primary as a frontrunner. But sometimes frontrunners sink quickly. Just ask Scott Walker and Jeb Bush. If Biden wants to win, he may have to do it on the debate stage to prove he’s the right person to take on Trump.