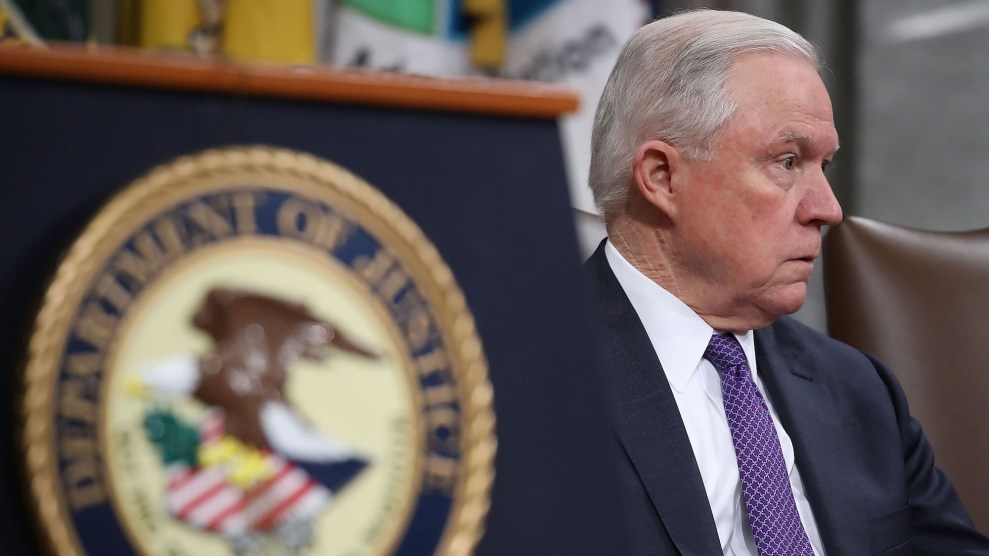 Special counsel Robert Mueller’s report, due for redacted release on Thursday, is expected to detail President Donald Trump’s efforts to interfere with FBI investigations into contacts between his 2016 campaign and Russia. In particular, the report may discuss Trump’s attempt to convince former Attorney General Jeff Sessions to undo his decision to recuse himself from overseeing the Russia matter.

Sessions rebuffed Trump’s demand that he take control of the probe—a choice that ultimately paved the way for Mueller’s appointment and helped create a major rift between the president and his first attorney general. But as a lawsuit quietly winding its way through the courts makes clear, that wasn’t the end of the story.

“It looks a lot like an attorney general trying to curry favor with an out-of-control boss.”

Sessions’ initial recusal announcement was broad: He promised to avoid involvement in investigations into any matters relating to the 2016 presidential campaign. But as Mother Jones has reported, he repeatedly violated that pledge during his time in office. Indeed, after months of public badgering by Trump, Sessions complied with his boss’s demand that the Justice Department investigate Hillary Clinton. In November 2017, Sessions instructed the US attorney for Utah, John Huber, to look into several issues related to Trump’s 2016 opponent.

While it has been overshadowed by Trump’s fury at the Mueller probe, critics say Sessions’ instructions to Huber were an alarming example of Trump successfully pressuring the nation’s top law enforcement officer into launching an investigation of a political opponent.

“It looks a lot like an attorney general trying to curry favor with an out-of-control boss,” Austin Evers, executive director of American Oversight, a liberal government watchdog group, told Mother Jones. “The Department of Justice opened an undefined investigation of Hillary Clinton based on the political demands of Congress and the president, not the existence of new evidence.”

Sessions’ order to Huber is at the center of a Freedom of Information Act lawsuit that American Oversight is pursuing in federal court in Washington. The organization charges that senior Justice Department officials, including Huber and former acting Attorney General Matthew Whitaker, acted in “bad faith” in the litigation by denying the existence of written communications conveying Sessions’ instructions to Huber. On Tuesday, the group asked a judge to allow discovery, rare in FOIA cases, so that it can seek additional information it says the department might be concealing.

A spokeswoman for Huber referred questions to the department’s national spokeswoman, who did not comment before publication.

As Mueller’s investigation heated up in July 2017, Trump began regularly blasting Sessions in tweets and other statements, attacking him over his Russia recusal decision and urging him to investigate Clinton. Trump, who said as a candidate that Clinton would “be in jail” if he were president, called for the Justice Department to probe Clinton’s use of a private email server while she was secretary of state, despite the department’s high-profile completion of its investigation into the matter in 2016. Trump also wanted prosecutors to look into what he said were Clinton’s own ties to Russia.

“So many people are asking why isn’t the A.G. or Special Council looking at the many Hillary Clinton or Comey crimes,” Trump tweeted on July 22, 2018. Two days later, he wrote, “So why aren’t the Committees and investigators, and of course our beleaguered A.G., looking into Crooked Hillarys crimes & Russia relations?”

Trump’s push drew backing from Capitol Hill, where various senior Republicans joined in calls for Sessions to name a special counsel to investigate Clinton’s role as secretary of state in authorizing the sale of Uranium One, a Canadian company with mining operations in the United States, as well as other matters. Sessions declined to appoint a new special counsel, but in a November 13, 2017, letter to then-House Judiciary Chairman Bob Goodlatte (R-Va.), Assistant Attorney General Stephen Boyd wrote that Sessions had “directed senior federal prosecutors to evaluate” the lawmakers’ request.

Following reports about Boyd’s letter, American Oversight filed FOIA requests seeking more information on what exactly Sessions had ordered. When the group didn’t receive a response, it sued the Justice Department. In November 2018, as part of an effort to have the suit thrown out, the DOJ filed a declaration by Vanessa Brinkmann, a senior lawyer in the department’s office of information policy. Brinkmann’s sworn statement said that another DOJ official, a counselor to Sessions, had informed her that Huber and Whitaker—who at the time was Sessions’ chief of staff—said that Sessions had issued “no written guidance or directives to Mr. Huber” with respect to investigating Clinton. The instructions were only issued orally, the department claimed. This meant that the Justice Department did not have to cough up a written record of Sessions ordering a probe of Clinton.

Sessions publicly revealed Huber’s probe in a March 2018 letter to lawmakers, months after requesting it. He claimed at the time that he received “regular updates from Mr. Huber.” But the department has revealed nothing about where the investigation has led.

Huber’s is not the only Justice Department probe into matters that Trump and his allies have clamored to have investigated. The DOJ’s inspector general is looking into the origins of the FBI’s Russia investigation. Testifying before the House last week, Attorney General William Barr said he had launched a separate probe to “get my arms around all the aspects” of the bureau’s counterintelligence investigation. Barr said he wants to determine whether the FBI had sufficient legal justification for investigating the Trump campaign.

But Barr drew far more attention for stating that he believed “spying did occur” in the Russia case. His words drew denunciations from Democrats but pleased the president. “These were crimes committed by Crooked Hillary, the DNC, Dirty Cops and others! INVESTIGATE THE INVESTIGATORS!” Trump tweeted.