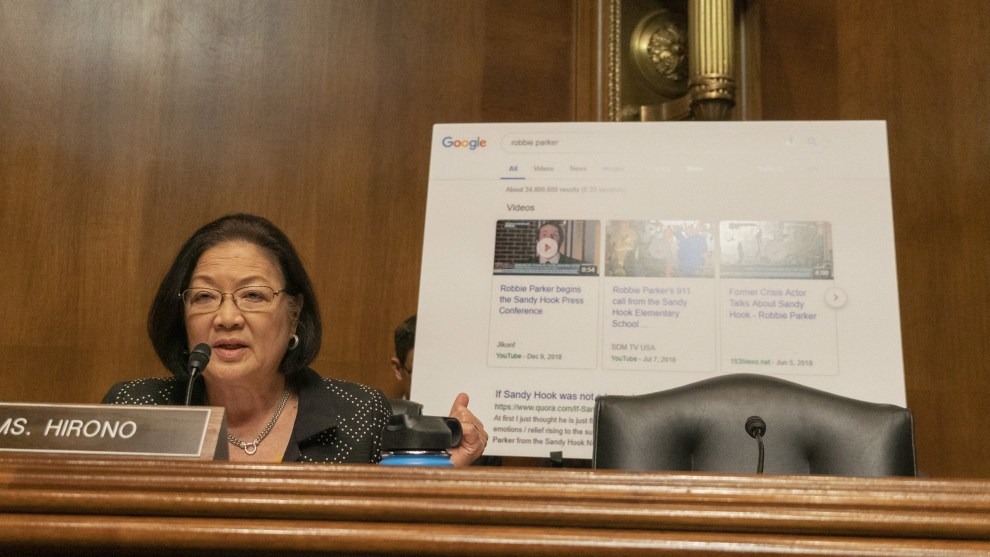 Sen. Mazie Hirono (D-Hawaii) shows false information about Sandy Hook on Google. She was the only Democrat present for most of a hearing on alleged conservative bias in tech. Stefani Reynolds/CNP via ZUMA

This week, Senate Democrats signaled they might be sick of dealing with claims from their Republican counterparts that Silicon Valley tech companies are biased against conservatives.

On Wednesday, as Sen. Ted Cruz (R-Texas) complained about purported bias to representatives from Twitter and Facebook during a hearing he chaired, almost every Democratic seat to his left remained empty for the entirety of the three and a half hour meeting.

Democrats may be trying a new approach of ignoring and mocking charges of anti-conservative bias.

The only Democrats making appearances were the subcommittee’s ranking member, Sen. Mazie Hirono (D-Hawaii) and Sen. Richard Blumenthal (D-Conn.), who showed up late and used much of his time to speak with one witness, Robbie Parker, whose six-year-old daughter was killed in the 2012 shooting at Connecticut’s Sandy Hook Elementary, on harassment he’s faced on tech platforms spurred by right-wingers like Infowars founder Alex Jones, who had claimed that the shooting was a hoax.

Cruz’s hearing, hosted by the Senate Judiciary Committee’s subcommittee on the Constitution, is the latest example of GOP lawmakers pushing allegations of technology companies’ supposed anti-conservative bias. Republicans have hawked this claim in Congress for the past several years, culminating in a series of hearings on the topic over the past twelve months, which have aired flimsy anecdotes that don’t necessarily evince a pattern of bias.

While Democrats have rejected the idea that tech platforms are being biased against conservatives, and fought Republican members on it in previous hearings, the absences at Wednesday’s event suggested that at least some of them might be trying a different approach that combines ignoring and mocking such charges. Prior to the hearing, when asked for his thoughts about it by the Washington Post, subcommittee member Sen. Sheldon Whitehouse (D-R.I.) only chuckled and told the paper, “just note that I laughed.”

Previous hearings conducted by Republican lawmakers have pointed to unclear examples of bias purportedly effecting sites like Gateway Pundit, a right-wing outlet that has pushed conspiracies and misinformation, and Trump-supporting YouTube personalities Diamond and Silk, who claim that their content has been censored.

The examples of bias Republicans presented in Wednesday’s hearing were anecdotes about isolated incidences of content moderation, that while real, are no more substantive than corresponding instances of accounts on the left being censored or restricted.

Lawmakers pointed to a case in which a 2017 campaign video from Sen. Marsha Blackburn (R-Tenn.) was briefly stripped of the ability to be spread as a paid advertisement on Twitter, as it contained content regarding abortion that the company initially deemed “inflammatory.” Twitter never deleted the video and eventually reinstated its status as a paid ad. Republicans also pointed to a recent case in which Twitter accidentally deleted the account for the anti-abortion rights movie “Unplanned” because it was linked to another account that violated its terms of service. Twitter ultimately reactivated the account.

While there’s no denying both those events happened, Twitter has also come under fire for similarly temporarily disabling left-leaning accounts, including one used by a Southern Poverty Law Center staffer after he reported on a hate crime. Facebook mistakenly censored a racial justice activist and other activists who have documented the ethnic cleansing of the Rohingya in Myanmar.

Such incidents lend themselves to cherry-picked narratives that are unlikely to be backed up by metrics or data. Republicans didn’t present any data or research suggesting anti-conservative bias in Wednesday’s hearing. Some experts think there is no such data to present.

What data that does exist on platform bias suggests left-leaning internet users may have more to worry about. Reports from social media analysis firm Newswhip show that over the last two months conservative sites have held three of the top five spots on the list of Facebook’s most shared publishers. Fox News held the number one spot both months and has often been the top publisher on Facebook or close to it at other points. This week Media Matters published new data showing that right and left wing Facebook pages get similar engagement, deflating claims of anti-conservative bias on the platform.