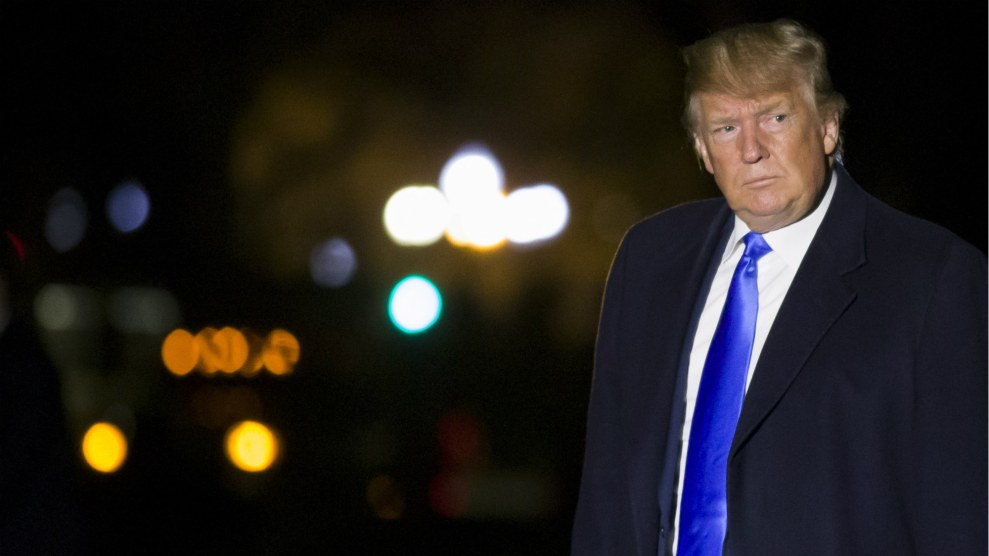 On Monday, the Trump administration officially designated Iran’s Islamic Revolutionary Guard Corps a terrorist group. But just a few years ago, as Donald Trump ran for president, he pursued a deal with an Azeri family that allegedly has close ties to the guard corps, an elite branch of the regime’s armed forces long accused of participating in criminal activity and sponsoring international terrorism.

In 2012, Trump struck a multimillion-dollar branding deal for a new hotel in Baku, the boom-and-bust capital of Azerbaijan, the natural gas–rich former Soviet republic ruled by an oppressive regime. His local partner was Anar Mammadov, the playboy scion of a wealthy and well-connected clan. Mammadov’s father, Ziya Mammadov, was at the time the nation’s transportation minister; despite his nominal government salary and background as a Soviet railroad system apparatchik—a Communist Party functionary—he was reportedly worth billions. As Mother Jones reported in 2015, Azerbaijan had a reputation as one of the most corrupt nations on the planet, with an increasingly repressive governing regime, especially when it came to press freedom. And the Mammadov family—and Garant, a company linked to Anar Mammadov that Trump partnered with—was allegedly connected to questionable business practices:

In an article titled “The Corleones of the Caspian,” Foreign Policy reported that the “profit margins” of [Anar] Mammadov’s Garant “appear inextricably linked to a number of sweetheart contracts signed with his father’s Transport Ministry.” One of Mammadov’s other companies has received over $1 billion in highway construction contracts, and the firm owns many of Baku’s buses and taxis. Until 2013, Mammadov owned a majority stake in the bank that processed all of the taxi cab fares and the company that provided insurance to all the cabs. According to Foreign Policy, the company that Trump is working with also secured the contract to construct the Baku bus station, which Mammadov’s uncle owns. A leaked diplomatic cable on Azerbaijan’s “most powerful families,” drafted in 2010 by the charge d’affairs at the US embassy in Baku, noted: “With so much of the nation’s oil wealth being poured into road construction, the Mammadovs also control a significant source of rent-seeking.”

New Yorker reporter Adam Davidson dug deeper into Trump’s Azerbaijan project and found that some of the Mammadovs’ deals led straight to the Iranian Revolutionary Guard Corps. According to Davidson’s reporting, the Mammadovs had a close financial relationship with a prominent Iranian family, the Darvishis, who were known to be associated with the Iranian organization:

At least three Darvishis—the brothers Habil, Kamal, and Keyumars—appear to be associates of the Guard. In Farsi press accounts, Habil, who runs the Tehran Metro Company, is referred to as a sardar, a term for a senior officer in the Revolutionary Guard. A cable sent on March 6, 2009, from the U.S. Embassy in Baku described Kamal as having formerly run “an alleged Revolutionary Guard-controlled business in Iran.” The company, called Nasr, developed and acquired instruments, guidance systems, and specialty metals needed to build ballistic missiles. In 2007, Nasr was sanctioned by the U.S. for its role in Iran’s effort to develop nuclear missiles.

The cable said that Kamal and Keyumars were frequent visitors to Azerbaijan; Kamal had recently established “a close business relationship/friendship” with Ziya Mammadov, and, with Mammadov’s assistance, had been awarded “at least eight major road construction and rehabilitation contracts, including contracts for construction of the Baku-Iranian Astara highway.” (Keyumars also seems to have been involved in these deals.) The cable added, “We assume Mammedov [sic] is a silent partner in these contracts.”

According to Trump’s personal financial disclosures, Trump’s deal with the Mammadovs covered the licensing and management of the hotel. The arrangement was typical of a number of Trump’s overseas deals—his local partners owned the building but shelled out millions for the use of his name and allowed Trump day-to-day control of the management of the property. Ivanka Trump posted a video of herself visiting Baku to inspect the property, and Davidson reported that the Trump family had extensive involvement with the Mammadovs, holding them to exacting standards for the hotel’s look and feel.

But, as Davidson reported, the Trumps appeared to have done little in the way of due diligence on their Azeri partners, which raises the question of whether the Trump Organization might have run afoul of the United States’ strict anti-corruption rules under the Foreign Corrupt Practices Act. The law makes it a crime for an American company to participate in activity that enriches a foreign government official in exchange for a benefit. If the Trumps invested in a project that was part of a corruption scheme, it could violate the law. The law also applies to any American company that unknowingly participates in a scheme if it could’ve discovered what was happening but avoided doing so.

As the 2016 election neared, the Baku hotel project appeared to be moving along—promotional materials had started to appear on the Trump Organization’s website, and hiring notices were posted. But shortly after Trump won the election, all mentions of the hotel were pulled from the Trump Organization’s website. The building once slated to become Trump’s newest luxury hotel appears to remain empty, catching fire in 2018.