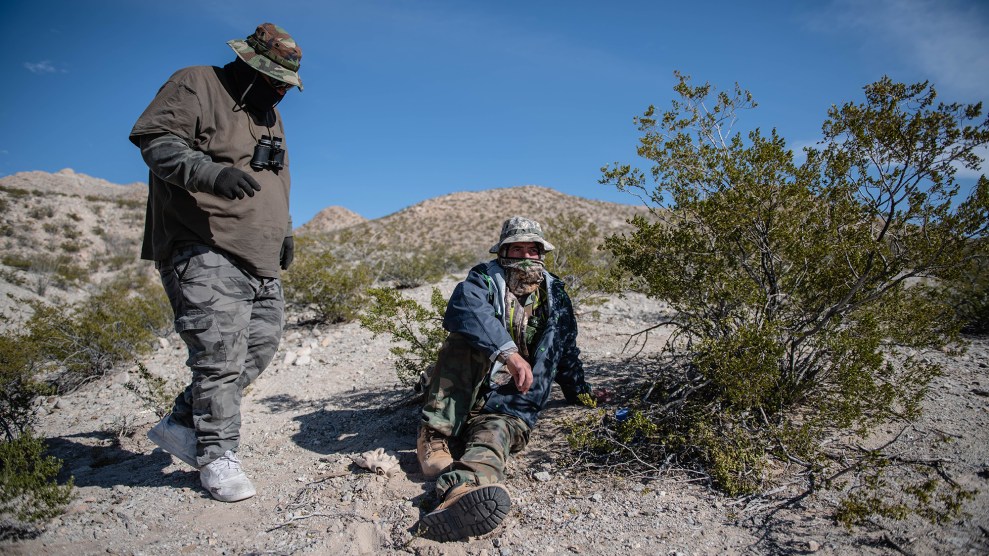 On Saturday, the FBI arrested the leader of a vigilante militia group that has been holding border crossers in southern New Mexico at gunpoint. But as of late Tuesday, videos of such apprehensions conducted by his group, United Constitutional Patriots, are still available to view on Facebook, despite apparently violating the company’s content policies.

Change the Terms, a coalition of nonprofits and civil rights groups pushing tech companies to work to reduce hate online, published images of the videos on Twitter on Tuesday, and called for Facebook to take them down. The danger, the coalition argues, is that the videos allow the United Constitutional Patriots to promote illegal activities while growing support and donations.

The content “violates a number of the provisions in the community standards Facebook has,” says Arusha Gordon, an attorney and co-interim director of the Stop Hate Project at the Lawyers’ Committee for Civil Rights Under Law. Gordon, making detailed reference to the platform’s own content policies, argues the videos violate “their provision on dangerous individuals and organizations, the provision on promoting or publicizing a crime, their provision on coordinating harm, section 3.13 on violence or graphic content. So there’s a whole number of provisions that it raises some serious questions under.”

“The United Constitutional Patriots’ actions raise concerns under both federal and state law and maybe even human rights law,” Gordon added. “Private citizens cannot go around detaining others and holding them captive.”

The videos come from Jim Benvie, a leader of the group. In one, which has garnered 70,000 views and more than 2,500 shares, a group of migrant adults and children sit on the ground with their hands above their heads. “They’re peaceful now because we’ve got them sitting down and under control,” Benvie says during his narration of the two-week-old Facebook Live stream.

Benvie repeatedly refers to the people he encounters in the videos as “invaders” undertaking an “invasion,” and calls for a wall along the southern border. In a video that’s just a week old, Benvie shows members of his group halting hundreds of adults and children, yelling at them to sit down, and demanding they wait for Border Patrol agents. That video has 114,000 views. As of late Tuesday, some videos highlighted by Change the Terms had been removed, though many others flagged by the group in communications with Mother Jones, including those on Benvie’s personal page and in a related Facebook group, still remain.

The videos were first surfaced by the New York Times, which reported on Friday that the United Constitutional Patriots had detained a group of about 200 immigrants in New Mexico shortly after they crossed the border. The group’s leader, Larry Mitchell Hopkins, who had previously pleaded guilty to impersonating a police officer, was arrested on charges of possession of a firearm by a felon. The Times indicated that the arrest may be the beginning of a larger investigation into the group.

Heidi Beirich, who tracks online hate at the Southern Poverty Law Center, says she first notified Facebook about the videos on Monday but that the company did not respond. Much of the offending content was live video, a feature that Facebook has faced difficulties in effectively moderating, as demonstrated during last month’s shootings in Christchurch, New Zealand.

“You’d think that after the mosque attacks, Facebook would be particularly intent on not getting this kind of stuff out. But I think the truth is they don’t have much of a mechanism to vetting this kind of content,” says Beirich. “People can put something up in any second.”

The ACLU of New Mexico called the militia group’s activities illegal and urged state authorities to investigate them. “We cannot allow racist and armed vigilantes to kidnap and detain people seeking asylum,” the ACLU said in a letter to New Mexico’s governor and attorney general. “We urge you to immediately investigate this atrocious and unlawful conduct.”

While accounts associated with United Constitutional Patriots were removed by PayPal and GoFundMe over the weekend, the group’s Facebook page remains active. Posts on the page continue to solicit donations, asking for checks or money orders to be sent in the mail. The page also posted a link directing users to an account on Square’s Cash App, which is owned by Twitter CEO Jack Dorsey. Square confirmed to Mother Jones that the account was deactivated on Tuesday for violating the platform’s terms of service.

In March, Facebook announced it was banning white nationalists. The company has also expressed an interest in expanding its team of moderators dealing with domestic extremism. But groups like United Constitutional Patriots have so far evaded bans targeted at domestic extremists, despite the racism and anti-immigrant views espoused by its members.

“Facebook has always said it takes into account action on the platform and off the platform…This is a moment where they need to look at militia groups and extremists beyond Alex Jones,” says Beirich. “These groups can be just as racist against immigrants and Muslims as white supremacist groups.”

Beirich says she fears that a lack of action from Facebook could embolden other extremist groups to use the platform for propaganda or take even more drastic steps to stop migrants. “God help us if somebody else is inspired by this,” she says.