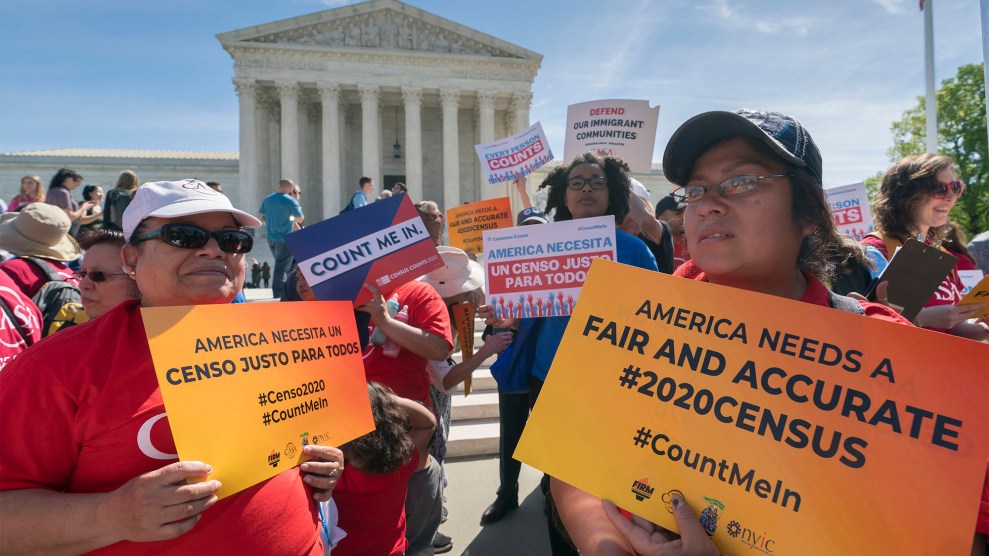 Immigration activists rally outside the Supreme Court as the justices hear arguments over the Trump administration's plan to ask about citizenship on the 2020 census in Washington on April 23.J. Scott Applewhite/AP

The Trump administration’s controversial effort to add a citizenship question to the 2020 census was drawn up by the Republican Party’s gerrymandering mastermind, who wrote that it “would clearly be a disadvantage to the Democrats” and “advantageous to Republicans and Non-Hispanic Whites.” This bombshell news, revealed in newly released legal documents, suggests that the Trump administration added the question not to better enforce the Voting Rights Act, as it claimed, but to benefit Republicans politically when it came to drawing new political districts.

A case challenging the citizenship question is currently before the Supreme Court, and the new evidence significantly undercuts the Trump administration’s position in the case.

Tom Hofeller, who passed away last year, was the longtime redistricting expert for the Republican National Committee. He helped Republicans draw heavily gerrymandered maps in nearly every key swing state after the 2010 election. In some of those places, like North Carolina, the new lines were struck down for discriminating against African Americans.

In 2015, Hofeller was hired by the Washington Free Beacon, a conservative news outlet, to study the impact of drawing state legislative districts based on citizenship rather than total population, which has been the standard for decades. Hofeller’s analysis of Texas state legislative districts found that drawing districts based on citizenship—a move he conceded would be a “radical departure from the federal ‘one person, one vote’ rule presently used in the United States”—would reduce representation for Hispanics, who tended to vote Democratic, and increase representation for white Republicans. But Hofeller said that a question about citizenship would need to be added to the census, which forms the basis for redistricting, for states like Texas to pursue this new strategy.

Hofeller then urged President Donald Trump’s transition team to add the question about citizenship to the 2020 census. He urged the team to claim that a citizenship question was needed to enforce the Voting Rights Act, even though Hofeller had already concluded that it would harm the racial minority groups that the act was designed to protect. That argument was then used by the Justice Department in a December 2017 letter requesting that the Commerce Department, which oversees the census, include a citizenship question.

Hofeller’s documents were discovered on hard drives found by his estranged daughter and introduced into evidence in a separate trial challenging gerrymandered North Carolina state legislative districts drawn by Hofeller. On Thursday, lawyers challenging the citizenship question cited them in federal court. They suggest that members of Trump’s team may not have been fully forthcoming in their testimony under oath. Neither Trump transition team member Mark Neuman nor John Gore, the former assistant attorney general for civil rights who wrote the Justice Department letter, mentioned Hofeller’s involvement in the letter when they were deposed under oath as part of a lawsuit by New York and 17 other states challenging the citizenship question.

Hofeller has long been involved in efforts to use the census to benefit the Republican Party. In the 1990s, he led the GOP’s campaign to oppose using statistical sampling to better count minority populations whom the Census Bureau tended to miss, writing that “a census that uses sampling and statistical adjustment will be the biggest victory for big government liberalism since the enactment of the Great Society.” Though the bureau favored using sampling, the Supreme Court disallowed it after Republicans sued. More recently, one of Hofeller’s protégés, Thomas Brunell, was under consideration to be named deputy director of the Census Bureau under Trump, but he withdrew after his work on Republican redistricting cases attracted scrutiny.

The census determines how $880 billion in federal funding is allocated, how much representation states receive, and how political districts are drawn. A citizenship question is expected to deter many immigrants and Latinos from responding to the census. That—especially if combined with an effort to exclude noncitizens from being counted in redistricting—would result in a huge transfer of economic and political power to whiter and more Republicans areas.

Anti-immigration hardliners also lobbied hard for the Trump administration to add the citizenship question. In July 2017, former Kansas Secretary of State Kris Kobach wrote to Commerce Secretary Wilbur Ross “at the direction of Steve Bannon” and said it was “essential” that the citizenship question be added to the 2020 census. Kobach told Ross that the absence of a citizenship question “leads to the problem that aliens who do not actually ‘reside’ in the United States are still counted for congressional apportionment purposes.”

The Supreme Court is expected to rule on the census case by late June.