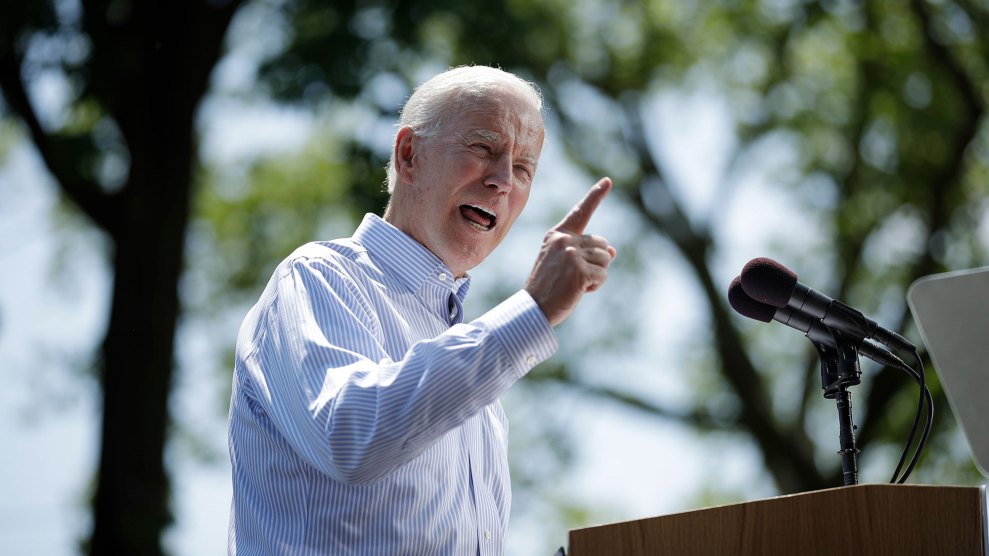 Former Vice President Joe Biden officially kicked off his 2020 campaign with a rally in Philadelphia on Saturday that focused on the need to unite the country and defeat President Donald Trump.

“Our politics has become so mean, so petty, so negative, so partisan, so angry, and so unproductive,” Biden said. “Instead of debating our opponents, we demonize them.” That style of politics is “ripping this country apart at the seems,” Biden said before attacking Trump as a “divider-in-chief” who scapegoats immigrants and Muslims.

Biden downplayed the importance of the policy differences between him and those further to his left. When it came to climate change, an area where Biden was criticized for looking for a middle ground approach, he told the crowd, “the single most important thing we have to accomplish is defeat Donald Trump.”

The former vice president focused on areas where Democrats are united against Trump. “Are we a nation that believes [in] ripping children from the arms of their parents at the border?” He asked as part of a series of questions that ended with the refrain. “No, we don’t. But Trump does.”

Biden is off to an early and substantial lead in the polls across demographic groups. But Biden has received a cool reception from many progressives and media figures who have criticized him for taking a number of positions over his five-decade career in national politics that are out of step with the Democratic party’s leftward turn. As Mother Jones reported last month:

His decades-long record of public service has been punctuated by his ties to the banking industry, his treatment of Anita Hill, his civil rights–era opposition to busing, and other actions out of sync with today’s Democratic Party. Biden offers his political foes a handful of easy targets, as he joins a crowded, mostly progressive Democratic field where candidates are vying for the support of a more left-leaning Democratic electorate.

In an obvious rebuke to Trump, Biden made a point of praising Obama’s character. “I think we should step back and say something we don’t often say enough as a party, or as a nation, Barack Obama was an extraordinary man,” Biden said. “He was a president our children could and did look up to.”

He also touted their record in the White House saying, “I was proud to serve as his vice president, but never more proud than the day we passed health care,” referring to the Affordable Care Act.

In the 2020 campaign, Biden is hoping to revive the pragmatic message that Obama honed in his run to the White House. “Let’s stop fighting,” Biden said. “And start fixing.”

Watch the campaign’s official recording below: