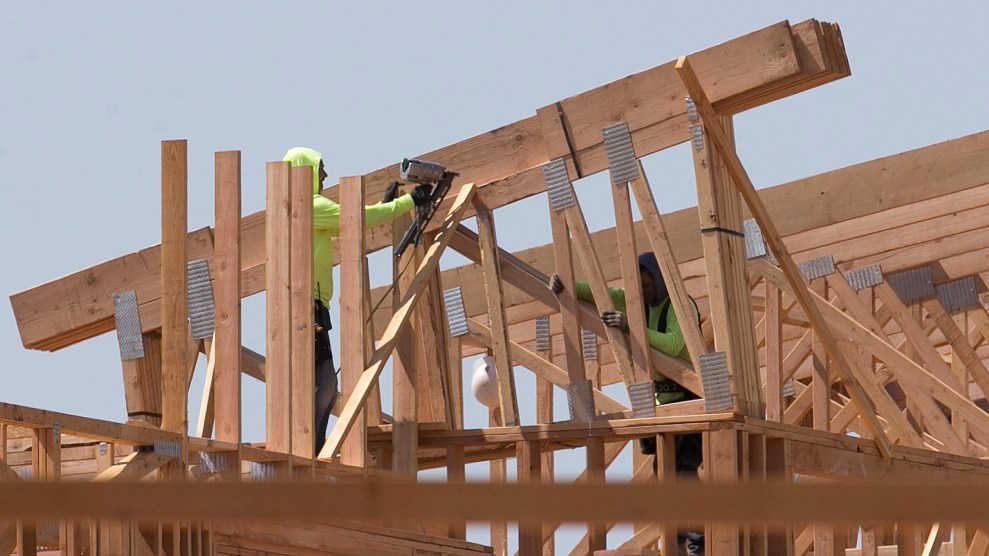 Builders work on an apartment complex in Sacramento, California.Rich Pedroncelli

On the same day that a devastating new report on homelessness was released, California lawmakers shelved the only bill currently trying to tackle the state’s overwhelming housing shortage crisis. Senate Bill 50, California Sen. Scott Wiener’s aggressive and controversial bill that would’ve expanded the housing market to allow for faster, bigger, and denser residential construction, cleared two committees earlier in the year with nearly unanimous support. But that momentum came to an abrupt end Thursday when the Senate Appropriations Committee, without debate or fanfare, tabled it until 2020. “It was the time to take a breath. We took a breath,” Democratic state Sen. Anthony Portantino, the chair of the committee, told the San Francisco Chronicle. “It doesn’t mean we’re not going to focus on solving the housing crisis in California. It just means that this isn’t the right fix at this time to do that.”

It’s a bit of a mystery, though, how exactly Portantino aims to solve the crisis when the only bill focused on dramatically expanding housing stock is now effectively dead for the current legislative session. “I don’t think it’s an adequate response to say, ‘Yeah, we have a housing crisis, but this isn’t the right time to do something bold.’ Now is exactly the time to do something bold, we should have done something bold 20 years ago,” Wiener told Mother Jones. He added that it is “very frustrating for the bill to be postponed unilaterally by one chair” after it had passed through two committees—the Senate Housing committee, in a 9-1 vote, and Senate Governance and Finance committee, in a 6-1 vote—and gotten a clear path to passing on the Senate floor. “What happened yesterday was not a vote-count problem,” he said. “It was a political problem.”

SB50 is Wiener’s second attempt at ambitious housing legislation. Last year, his bill SB836, which lacked meaningful standards for low-income, affordable housing, didn’t even pass out of its first committee. SB50 has been met by opposition on all sides: NIMBYers have disparaged it as “an act of war on homeowners.” Others have characterized it as “a Trojan horse for big developers’ profits.” Housing rights activists worried that it would only further fuel gentrification. And local politicians, from San Francisco to Los Angeles, feared that it would override cities’ abilities to determine their own zoning laws. But it also had widespread support, ranging from the California Labor Federation and the California Chamber of Commerce to the California League of Conservation Voters, Habitat for Humanity, and the Non-Profit Housing Association of Northern California. Unlike last year, the construction workers union supported the bill this time around, as did a number of environmental groups, and its momentum in the legislature suggested it would at least make it to the Senate floor. “Let’s be clear,” Wiener said, our vote count has been strong on this bill.”

The state’s homelessness numbers that dropped Thursday reveal a stark increase in the unsheltered population throughout the state. The homeless population in Alameda County jumped 43 percent in the past two years. Santa Clara County saw a 31 percent rise, and the homeless population of San Francisco, where the median price for a two-bedroom home costs $1.3 million, rose by 17 percent. The Southern California counties of Orange, Los Angeles, and San Diego all reported double-digit percentage increases in their homeless population.

The coincidence of those figures landing the same day that SB50 was tabled is not lost on Wiener.  It’s “highly telling,” he said. “We have a 3.5 million-home deficit. People are living in tents, children are homeless, young people are leaving, working families are being pushed out.”

Meanwhile, other tenants’-rights and homelessness-related bills are facing similar fates as SB50. The Chair of the Appropriations Committee also killed Wiener’s bill SB48, which would have streamlined emergency shelters and navigation centers for the unhoused. Tenants’-rights bill AB36, which would have potentially expanded rent control to more tenants, will likely be delayed until 2020. And AB1482, a statewide rent cap, has an uphill battle to overcome fierce opposition from landlord groups.

“We don’t need more delays,” Wiener said. “Now is exactly the time to take bold steps, because even with a bold step, nothing happens fast. You can pass the most aggressive laws possible today, and it’s still going to take years for the solution to play itself out because construction doesn’t happen overnight.”