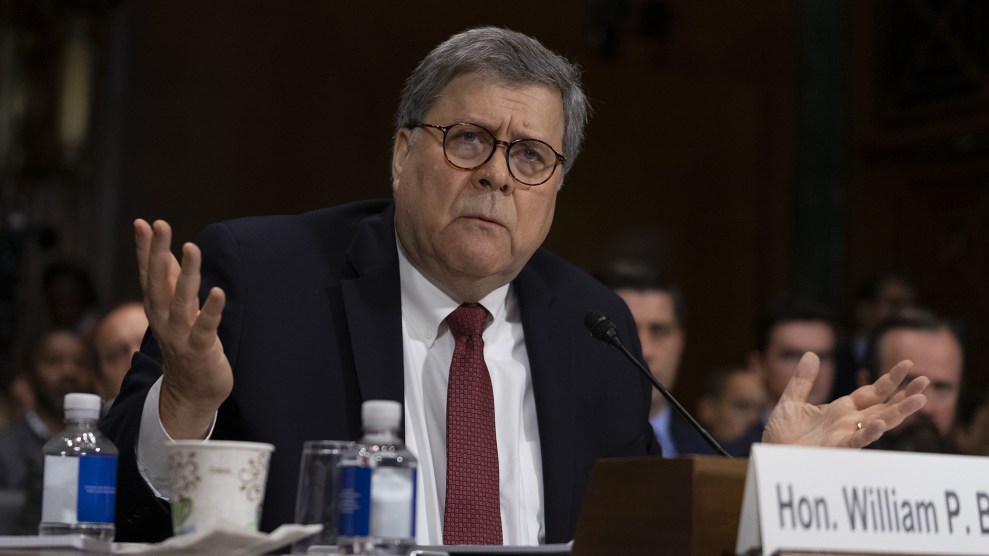 Attorney General William Barr went to bat for President Donald Trump in every way in his testimony before the Senate Judiciary Committee on Wednesday. He denied the obvious daylight between his characterizations of Special Counsel Robert Mueller’s report and the actual findings of the report; he agreed with Republican senators raising old and unfounded complaints about Hillary Clinton and the FBI’s handling of its investigation into Trump’s campaign; and he bent over backward to exonerate the president’s behavior cited in the report. “I think [Barr’s] first responsibility is to our law and to the Constitution,” Sen. Richard Durbin (D-Ill.) told reporters during a break in the hearing. “Apparently he believes his first responsibility is to the president.”

Pundits, politicians, and legal experts have begun to reach the same conclusion. But many of those same people applauded Trump’s selection of Barr, who served as attorney general under George H.W. Bush, to replace Acting Attorney General Matthew Whitaker in December. The Washington consensus was that Barr was a company man dedicated to the institution of the Justice Department and a personal friend of Mueller, and that he therefore would not cave to Trump. His handling of the Mueller report suggests that was wrong and raises a question that some Trump critics have been asking all along: Why, in the twilight of his career, did a respected former attorney general return to the job to protect Trump?

The answer is that Barr’s actions to resist congressional oversight and empower the president are not a departure from his earlier career but a continuation of it. Barr’s current behavior is eerily similar to the steps he took three decades ago to protect presidents and thwart oversight.

Before Bush selected Barr as his second attorney general in 1991, Barr had already gained a reputation as a supporter of presidential power as the head of the Justice Department’s Office of Legal Counsel, which renders important legal interpretations for the executive branch and the president to follow.

At OLC, Barr warned about congressional attempts to intrude on the power of the president. These included restrictions on the president’s ability to remove appointees, requests for information from agencies and from the White House, and efforts to limit the executive branch’s solicitation of funds from a foreign government or person without congressional approval. He provided the Bush administration with the legal justification for arresting fugitives overseas, even if doing so violated of international law. And he supported an OLC memo that took a narrow view of the authority of inspectors general—the agency watchdogs tasked with investigating the executive branch. In 2001, Barr said, reflecting on his time at the Justice Department, that “there was constantly a problem with the inspector generals that came across when I was there, because I tried to slap the wrists of the inspector generals and curtail their authority, and that became somewhat of a cause célèbre.”

In May 1990, Barr ascended to the No. 2 position at the Justice Department. As deputy attorney general, he advised Bush that he could go to war in Iraq without consent from Congress. “There’s no doubt that you have the authority to put 500,000 troops in the field,” he later recalled telling Bush. As attorney general for the final year of Bush’s administration, Barr encouraged Bush to pardon six Reagan administration officials who, collectively, had one conviction, three guilty pleas, and two ongoing cases over the Iran-Contra scandal, including for obstruction of justice and lying to Congress. Bush pardoned all six.

But Barr’s support for arresting fugitives abroad was most strikingly similar to his handling of the Mueller report and his attitude toward Congress’ requests to read the full report and ask him questions about it. In October 1989, four months after Barr issued a secret OLC memo authorizing the FBI to make these arrests, news of the memo leaked to the press, as Ryan Goodman, an expert on national security and human rights law at New York University, detailed recently in an article for the blog Just Security. The memo appeared to have been used to abduct Panamanian leader Manuel Noriega and bring him to the United States on drug trafficking and money laundering charges earlier that year.

Members of Congress demanded to see the memo. Barr refused to release it. Instead, he offered an account that he said “summarizes the principal conclusions.” As Goodman notes, that’s the exact language that he used in describing the four-page letter he sent to Congress in March upon receiving the Mueller report.

It took a couple of years for Congress and the public to get the full OLC memo. When they did, Goodman recounts, it became clear that Barr’s summary had “omitted some of the most consequential and incendiary conclusions from the actual opinion.”

A few hours after Barr appeared before the Senate panel on Thursday, one of his deputies informed the House Judiciary Committee chairman that the Justice Department would not comply with a subpoena for the unredacted Mueller report and underlying documents. The subpoena, Assistant Attorney General Stephen Boyd wrote in a letter Thursday, was “not legitimate oversight” and constituted “congressional interference with the autonomy of the Department’s law enforcement functions.” It read just like something Barr might have written when he held the same title 30 years ago.