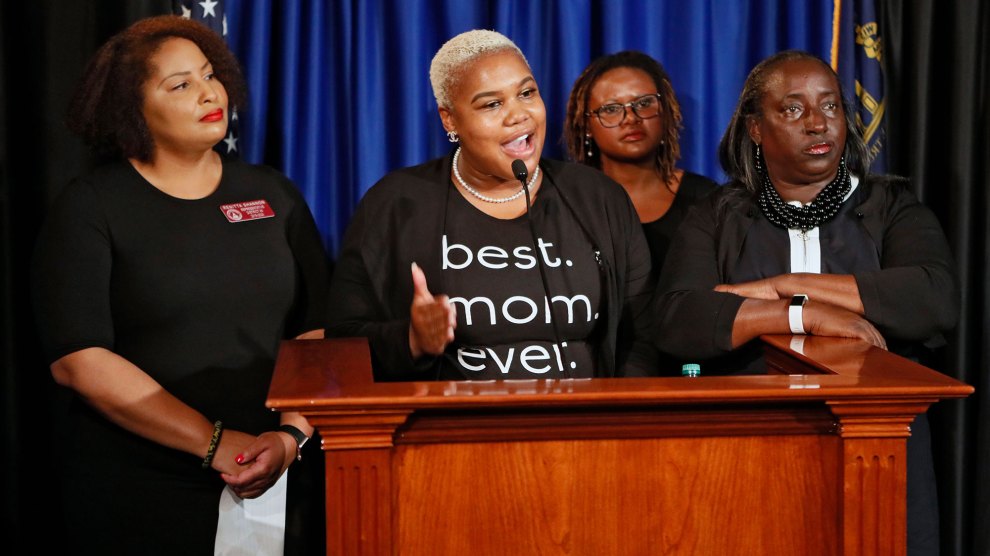 Georgia’s Republican Governor Brian Kemp signed a law Tuesday banning abortions after six weeks, before many women even know they are pregnant. One of the most restrictive abortion laws in the country, HB 481 has proved controversial since it was first introduced in February and Kemp’s signing immediately sparked outcry from female lawmakers in the state, many of whom made news in the past few months for their own legislative proposals clapping back at their male colleagues.

Following a protest rally led by Planned Parenthood at the State Capitol Tuesday, a group of black female lawmakers held a press conference vowing to fight back in the courts and at the polls.

“I chose life for my children and my unborn child right now, but…I am not in every household of thousands and thousands of Georgians that want to make that choice for themselves,” Rep. Erica Thomas said, standing alongside three of her peers. “What you saw earlier today was men speaking for the women and the families of Georgia. If that’s not a problem, then I don’t know what is.”

Rep. Park Cannon, the youngest woman in the Georgia general assembly, also spoke and identified herself as “one of the women who have had abortions.”

Other voices leading the charge against the bill chimed in on social media. Rep. Dar’shun Kendrick called the legislation a “death warrant for women in Georgia by making safe abortion illegal” in a tweet, while Rep. Renitta Shannon and Sen. Jen Jordan also sounded the alarm. Former gubernatorial candidate and Democratic party stars Stacey Abrams and Rep. Alexandria Ocasio-Cortez weighed in, too.

3/4 – As a black woman who has had an #abortion, I know firsthand how dangerous #ForcedBirthing policies can be. Georgia has the highest #maternalmortality rate in the country, so why are we making health care HARDER to get? #HB481 endangers women's lives. #JusticePolitics

4. Republican leadership would do well to heed this warning: the women of this state will reclaim their rights after they have claimed your seats.#gapol pic.twitter.com/wItkLh00mj

Bad policies like the forced pregnancy bill are a direct result of voter suppression. If leaders can silence Georgians’ voices at the ballot box, they can ignore Georgians’ voices when in office. We will fight back in court and at the voting booth. #HB481 https://t.co/15iOJWaBUU

Most of the men writing these bills don’t know the first thing about a woman’s body outside of the things they want from it. It’s relatively common for a woman to have a late period + not be pregnant.

So this is a backdoor ban. https://t.co/xWd9GAj51b

Many of the same black female lawmakers who held the press conference Tuesday have been fighting the bill for months, speaking movingly on the floor of the Capitol and, in an action that drew national attention, introducing legislation that would amend the state code to require men 55 and older to “immediately report to the county sheriff or local law enforcement agency when such male releases sperm from his testicles.”

The same day that legislation was introduced in March, Rep. Kendrick talked about introducing “testicular ‘bill of rights'”—an idea that went viral:

Ggggooooodddd morning! Introducing my "testicular bill of rights" legislative package. You want some regulation of bodies and choice? Done! pic.twitter.com/5E8HBRSc9l

Also in March, when the heartbeat bill came up for a vote in the House, Rep. Shannon spoke in protest until she was physically removed from the podium:

I said if #HB481, a bill to outlaw #abortion, came up for a vote I would speak against it until being physically removed to try to stop it. Last night that happened. Unfortunately it passed by 3 votes & is headed to the Senate. 📞 your Senator! #NoAbortionBansGA #JusticePolitics pic.twitter.com/9gFElrsmM0

Then, after the legislation passed the House, Rep. Thomas gave a stark warning to Gov. Kemp: “I’m done with these people, and I feel like we have to do something to make a change. And if I have to stand outside as a pregnant woman…of the governor’s office, I will stand outside, and I will get my chair, and I will rally around because you do not need to sign this bill,” she said. “You sign this bill, you are done.”

“You sign this bill, and you are DONE”@itsericathomas has a powerful message for @GovKemp about #HB481. pic.twitter.com/hGus2VcREg

A speech from Sen. Jordan that month also went viral—in which she shared deeply personal details about her own difficulties with pregnancy. “I have seen what many of you in here have called a heartbeat 10 times. But I have only given birth twice. I have lost seven pregnancies in varying points of time before 20 weeks and one after five months. Her name was Juliette,” she said. “Someone came up and said ‘who speaks for the unborn, who represents the unborn?’ I will tell you. Their mothers do.”

Our state simply cannot afford to criminalize women and doctors. The #HeartbeatBill is dangerous in far too many ways.

Watch the closing of my dissent here: https://t.co/89TBWnR4S7

Georgia is the fourth state in 2019 to enact a heartbeat abortion bill. While these bans aren’t new, before this year, they “were rarely enacted,” according to the Guttmacher Institute.

“States pushing radical abortion bans that are clearly in violation of Roe v. Wade is part of a deliberate strategy to advance these cases to the U.S. Supreme Court, in hopes that an increasingly conservative Court will undermine or even overturn Roe,” Elizabeth Nash, the senior state issues manager at Guttmacher Institute, said in a statement Monday. “The surge in attempts to ban abortion in the earliest stages of pregnancy underscores that the end goal of anti-abortion politicians and activists is to ban all abortion.”

None of the bans signed into law so far are currently in effect due to later enactment dates or legal challenges. The Georgia bill would go into effect January 1, 2020, but the ACLU and Planned Parenthood have already signaled they will take the bill to court.

It seems likely state lawmakers will continue the fight, too. “Whether they know it or not, this is an attack on all women,” Rep. Shannon said at the press conference Tuesday. “All miscarriages will be subject to suspicion of criminality, and instead of seeking immediate care, women will be weighing if seeking care could mean being criminalized. Black and brown women will be disproportionately criminalized. This bill is not pro-life, but a death sentence for women whose viability of life is uncontested.”