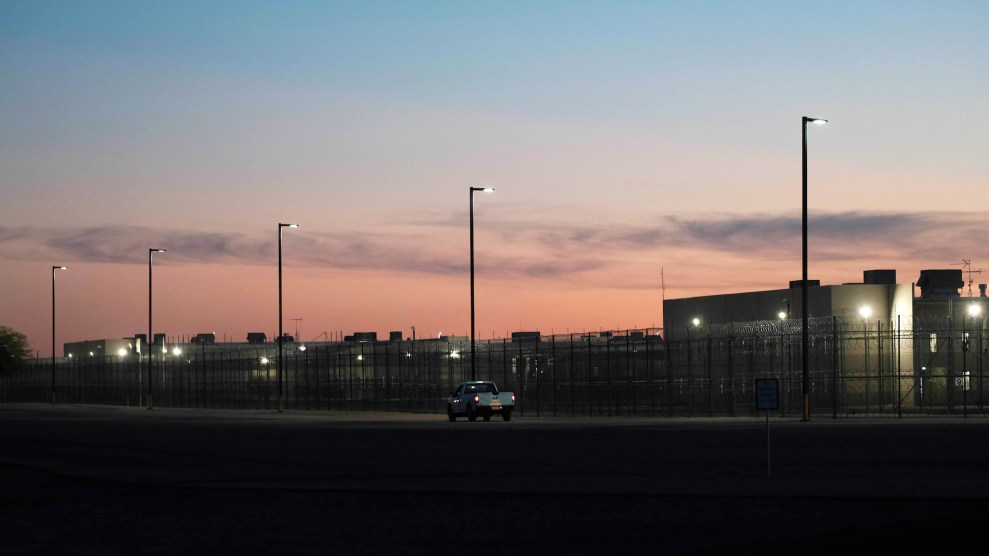 In June 2017, before signing a historic suite of criminal justice reform bills, Louisiana’s Democratic governor, John Bel Edwards, declared, “I’m not proud of our title as the most incarcerated state, but that now is going to be part of our history.” True to his word, the governor announced one year later that his state no longer had the nation’s highest incarceration rate.

But Louisiana was on the verge of a different sort of incarceration boom that would wipe out much of that progress.

As Louisiana began to send fewer people to jail and release inmates more quickly, Immigration and Customs Enforcement stepped in to fill the void. Since February, ICE has started housing detained immigrants at three new jails in the state, doubling the agency’s capacity in Louisiana. In the coming weeks or months, Louisiana may surpass California to become the state with the second-most ICE detainees, behind Texas.

ICE has long lacked the capacity in its facilities to house all the migrants it detains, a shortfall that’s worsened as the Trump administration moves toward mandatory detention of asylum seekers. Increasingly, the agency is contracting with local jails to make up the difference. But when migrants are sent to places like rural Louisiana, it becomes much harder for them to win asylum.

Louisiana has far fewer immigration attorneys than states like California and Texas. ICE’s New Orleans office, which oversees all detainees in Louisiana, denies nearly every parole application, meaning detainees have to fight their cases and assemble the documents that back up their claims from jail.

When asylum seekers finally make it to court, Louisiana’s immigration judges deny almost all of their asylum claims. One judge, Agnelis Reese, denied every asylum claim she’d heard between 2014 and 2018. For an administration intent on quickly deporting asylum seekers with minimal due process, there is probably no better place to send people than Louisiana.

The new contracts in Louisiana show that ICE continues to disregard the limits Congress tried to impose on the number of immigrants it detains. The 2019 spending bill passed by Congress in February instructed ICE to reduce its detainee population from about 50,000 to 40,000 by September. Yet ICE has routinely exceeded congressional limits, and it’s taking things even further with the Louisiana contracts, which are expanding its capacity by another 2,500 detainees. The three Louisiana jails are run by LaSalle Corrections, a Louisiana-based private jail operator that started in the nursing home business before realizing it could apply the same model to running jails: Keep occupancy high and costs low.

The rapid move toward immigration detention in Louisiana has caught prison reform advocates off guard. Andrea Armstrong, a law professor at Loyola University New Orleans, says immigrant detention “just simply wasn’t on anybody’s radar” as the state government worked to reduce the incarcerated criminal population by expanding alternatives to prison, lowering mandatory minimum sentences and increasing parole eligibility. Jamila Johnson, a senior attorney with the Southern Poverty Law Center, says advocates knew justice reform could lead jails to close and turn into immigration detention centers. But they did not anticipate what has happened instead: more jails holding both immigrants and criminals, in separate areas.

The numbers are striking. Louisiana’s jail population dropped by about 2,700 between October 2017, the month before many of the criminal justice reforms took effect, and December 2018. ICE’s new contracts let it send about 2,800 people to those jails. (This figure includes the three new facilities and a Bossier Parish jail that ICE started using last year.)

When migrants are sent to places like rural Louisiana, it becomes much harder for them to win asylum. One judge denied every asylum claim from 2014 to 2018.

ICE pays private jail operators far more than the state of Louisiana does. The state’s rate, which hasn’t increased in more than a decade, is $24 a day to imprison people; ICE’s is more than $60. Julian Whittington, the sheriff of Bossier Parish, made no secret of the fact that money played a role in his decision to move out more than 180 prisoners to make room for his first ICE inmates. “State rate is a whopping $24.39 and headed down to 19,” Whittington, whose jail is, appropriately enough, in the town of Plain Dealing, told the local ABC affiliate. Andy Brown, the sheriff of Jackson Parish, which is allowing ICE to detain 1,000 immigrants at its jail, wrote on Facebook that ICE pays more and “these immigrants are better behaved.”

Lieutenant Bill Davis, a spokesman for the Bossier sheriff’s office, tells Mother Jones that it makes sense to take immigrants from ICE because the county is losing money on state inmates while running a “top-notch correctional facility.” He dismisses the political controversies over immigration. “We don’t care about that,” he says. “Our job is to house inmates…whether they’re ICE inmates, or whether they’re parish or state, we’re housing them. That’s it.”

The growing number of detained immigrants and the vast distances between facilities pose challenges for the immigrants’ attorneys. David Rozas has three full-time immigration attorneys at the law firm he runs with his brother in Baton Rouge and Lafayette. ICE’s new contracts with rural jails are forcing those lawyers to spend 10 to 15 hours a week driving between the five detention centers where their clients are housed. They work from six in the morning until eight at night. It takes a toll and makes it hard for Rozas to retain his attorneys. “After six to eight months, they get burnt,” he says.

Rozas says the far-flung locations of the new ICE jails “can’t be anything but intentional.” ICE’s goal in contracting with these jails, advocates suspect, is to make it harder for immigrants to get access to counsel. To make matters worse, many documents have to be filed in person at the Justice Department’s immigration courts in Oakdale and Jena. At the Jackson jail, detainees must appear before an Oakdale judge via videoconference for their initial hearing. If Rozas is with a client in Jackson and needs to file something mid-hearing to push back against the ICE prosector, the hearing has to be delayed so he can drop it off in Oakdale, two hours away. “There’s no other court…where you have to file something to a remote location to then practice in a different remote location to remote back in to that other location,” Rozas says.

Asylum seekers represented by Rozas and other Louisiana attorneys are the lucky ones. Most have to plead their cases on their own. Walter Corrales, a Nicaraguan asylum seeker who has been detained at LaSalle’s River Correctional Center since February, was one of them. He lost his case and is now appealing. Speaking by phone from River, Corrales says he doesn’t know anyone at the facility who’s had an asylum claim granted by Louisiana judges. For now, Corrales lives in a room with about 60 people. The guards, he says, take them out for an hour of fresh air on days when they feel like doing so. Like many immigrants in Louisiana, he was first sent to a prison in rural Mississippi, operated by the private prison company CoreCivic, where ICE is now keeping about a thousand people at a time. Corrales says he fled Nicaragua after being attacked for protesting the country’s authoritarian president, Daniel Ortega, but he calls his roughly three weeks at the Mississippi prison the worst period of his life.

For Corrales and others unfortunate enough to be sent to Louisiana, deportation is the norm. At the Oakdale court, where Reese has denied every asylum case in recent years, her colleague John Duck denies 83 percent of claims. Data is not yet available for the Jena immigration court that opened last year. At Jackson, asylum seekers’ final hearings are expected to happen via video conference with judges at out-of-state courts, according to Homero López, executive director of the Louisiana legal aid group ISLA. The video hearings are particularly problematic in asylum cases, where a judge’s subjective assessment of someone’s credibility is often decisive.

Olga Badilla, a Los Angeles immigration attorney, represents more than a dozen LGBT asylum seekers sent to Louisiana. Usually when she’s representing clients outside of California, she can rely on local advocacy groups or lawyers to meet with the clients. “In this case, there’s nothing,” she says, given how few immigration attorneys and advocates there are in northern and central Louisiana. Immigration judges in Los Angeles approve 30 percent of asylum claims, according to the Transactional Records Access Clearinghouse at Syracuse University, and Badilla had been shocked to hear about Louisiana attorneys who are resigned to losing almost all their cases before filing appeals. “From someone who practices in Los Angeles,” Badilla says, “it’s horrifying.”

The latest addition to ICE’s Louisiana network is a LaSalle jail in Richwood, a town of 3,400 about 40 miles south of the Arkansas border. The town government opted to support the arrangement because it would be paid $1.50 per day per inmate, while LaSalle does the work of running the jail. Last Tuesday, Rozas picked up his first client at Richwood. He had already worked out the logistics when we spoke the next day. One of his attorneys would stay with family nearby, go to a hearing in the morning, then drive an hour to Jackson, then drive another two to River. Driving back to Rozas’ Baton Rouge office would require two more hours of driving.

Armstrong, the Loyola professor, says advocates might have pushed for criminal justice reform to include provisions that made it harder for jails to contract with ICE if they had anticipated an immigration detention boom. “In hindsight, the state-sentenced population does not operate in a vacuum,” she says. “It is an interlocking system with certain release valves.”

Of immigrants, Armstrong adds, “We didn’t think about that population. And perhaps we should have.”