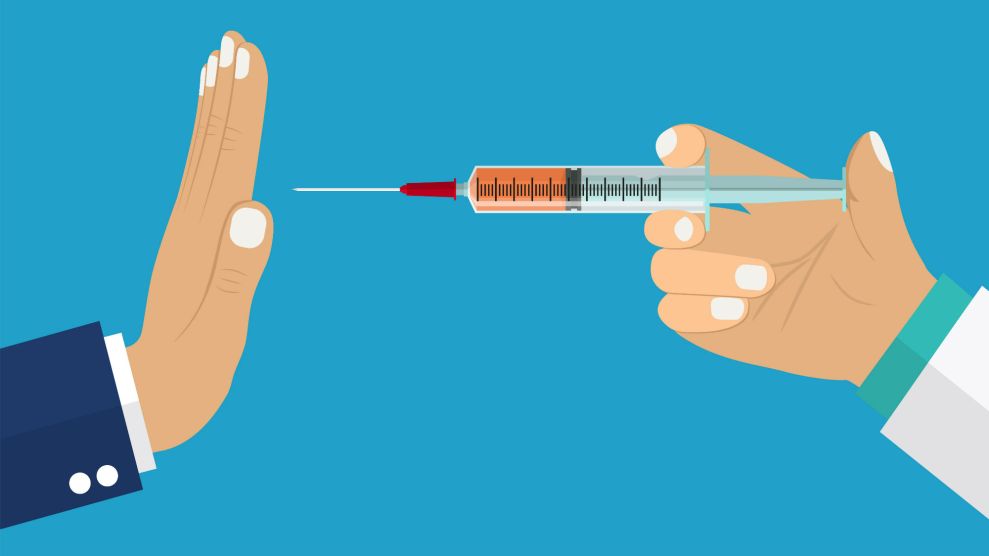 The United States is in the midst of a record-setting measles outbreak. According to the Centers for Disease Control and Prevention, more than 760 individuals across 23 states have contracted measles this year—the “greatest number of cases reported in the US since 1994 and since measles was declared eliminated in 2000.” In light of this national health crisis, Mother Jones spoke with Sean O’Leary, a Colorado-based doctor specializing in pediatric infectious disease, who was, as he says, “on the front lines” of conversations with parents about vaccines as a former primary care pediatrician beginning in 1999. He has also conducted research in identifying and addressing barriers to vaccination.

Here O’Leary tells us, in his own words, about his experiences: how he’s seen parents in recent years come to expect to collaborate with doctors on their children’s medical care and how that practice may lead to fewer vaccinations. What he’s talking about is known as “shared decision making,” and research shows that asking open-ended questions like, “What do you think about Johnny’s shots today?” is less effective in getting parents to vaccinate their children than the “presumptive approach,” in which the language used assumes the child will be vaccinated: “Johnny has some shots today.” While it’s not totally clear how big of a role provider-parent interactions play in vaccination rates across the country, O’Leary posits that almost every doctor currently deals with parents who expect to weigh in and collaborate on their child’s care.

As O’Leary explains to Mother Jones, he’s experienced the difference in the two approaches first hand—and he knows how these conversations can be stressful, and even confrontational. But, he says, they’re crucial.

He said, “Oh, no, we don’t vaccinate.” And he brought out this notebook with Excel spreadsheets. He tried to convince me of why vaccines didn’t work. And I was just completely taken aback.

When I was first starting in general pediatric practice, there was a day I was going to see a four- or five-year-old child. It was my first time seeing him. But when I looked through his chart, I didn’t see any vaccines.

I thought, “Well, that’s weird. They must just not have the record.” When I went into the room—and I remember the guy well—there was this dad. He was an engineer. I went through the regular visit with him and then I said, “Oh, you know, I didn’t find any vaccines in here. Do you have a copy of the shot records?”

He said, “Oh, no, we don’t vaccinate.” And he brought out this notebook with Excel spreadsheets. He had graph paper with his handwriting. And he had done, essentially, his own analysis of a lot of the different vaccines.

He tried to convince me of why vaccines didn’t work and why they were a bad idea. And I was just completely taken aback. I had been trained in medical school and residency about the benefits of vaccines and I knew that these recommendations came from people who devoted their lives to studying these things, using the scientific method.

I came out of there shaking, I was so angry.

That was the first example [of an instance where I encountered a parent denying the science of vaccines]. With time, I certainly mellowed in my approach. And I came to recognize that there’s a spectrum of people around vaccines. The vast majority of parents are accepting of vaccines—you just say, “It’s time for the shots,” and they get them. Then there’s a percentage of people that just have questions. And then, there are these rabid anti-vaccination parents like this guy.

In my practice, with the infant series of vaccines, we took a “presumptive” approach all along: They would come in and it would go without saying that it’s a 2-4-6 month visit [per the recommended screening and assessment schedule for newborns]. Then the nurse would come in and do your shots. And I think that’s how a lot of practices worked. We didn’t even think about it back then.

I started medical school in 1992, and then a residency in 1996. And then went into general pediatric practice in 1999. It was an era when the internet was becoming more and more a tool for health information. In the early 2000s, that’s when I started to see [misinformation]. It was not just about vaccines, but about whatever. People would print stuff that they had found on the internet.

That’s where I first recognized as a clinician, I’m not going to ask about this, I’m just going to say it because I get less resistance when I do that.

Once social media platforms became more commonly used, it just really fueled that spread of misinformation. It was also around the time that adolescent vaccines were coming into routine use—Tdap, the meningococcal vaccine, and then the HPV vaccine. And some of that is maybe coincidental, and some of it is also potentially related. But that’s where you had to mention it to the parents and to the adolescent: “There are these shots we’re going to be doing today.” And that’s where I first recognized as a clinician, I’m not going to ask about this, I’m just going to say it because I get less resistance when I do that.

The “presumptive” approach is something I think a lot of people have already been doing, but for those that aren’t, we now have evidence that it is effective. “Shared decision making” is really intended for preference-sensitive decisions—places where there’s no clear medical treatment, no clear correct medical decision. For example, in making a decision between open heart surgery or using a catheter. But where there’s a clear medical indication for an intervention, that’s not really an appropriate place for shared decision making. And vaccines fit squarely in that space. The benefits of vaccines greatly outweigh the risks and they’re in the best interest of the child.

For doctors, talks with hesitant parents are difficult conversations. We found in a study in 2011 that when pediatricians do encounter parents with questions about vaccines, about half of them report spending more than 10 minutes [explaining the science]. The average “well-child” visit is about 18 minutes long in the US, so if we’re spending more than half the time talking about what is really the most evidence-based thing we do in pediatrics, that’s a real problem. And as a pediatrician, this is a fairly common occurrence. There is no debate in the scientific community about whether or not the benefits of vaccines outweigh the risks. And so when you’re having to spend all this time explaining something that should be just a complete no-brainer, it can be very frustrating.

When you’re having to spend all this time explaining something that should be just a complete no-brainer, it can be very frustrating.

And the other big part of this is, we’re not really trained very well in how to how to navigate these conversations. So you end up in these sometimes confrontational or argumentative situations. At the end of the day, a lot of the parents agree to get vaccinated, but a lot of them still don’t.

So how do you inform individual patients about vaccines? In the past, it’s been based on what some people have called the “information deficit model”—you just provide the facts and assume that human decision making is rational. And once you’ve provided the facts, people will make the right decision. But it clearly much more complicated than that.

The work I’ve been doing is around the use of another technique called “motivational interviewing.” The core concept of motivational interviewing is patients make the decision, patients do the health behavior change, because of the patients’ own internal motivations, not the doctor’s motivations. The techniques that we’re focusing on are asking open-ended questions, using affirmations, using reflection, asking permission to share, and then offering autonomy support. Research shows this approach can be effective.

In many cases in medicine and in pediatric medicine, shared decision making is a very appropriate approach. And I think parents should consider that. But vaccines are really not one of those situations. The science behind the vaccination schedule is very clear. The best thing parents can do is vaccinate their child according to the recommended schedule.

By the way, I only saw that family [from 1999] a few more times clinically, but a few years after that, I saw the father at a street festival in Fort Collins. He was in front of a placard where he was touting 9/11 denialist conspiracy theories.

This has been condensed and edited for clarity.