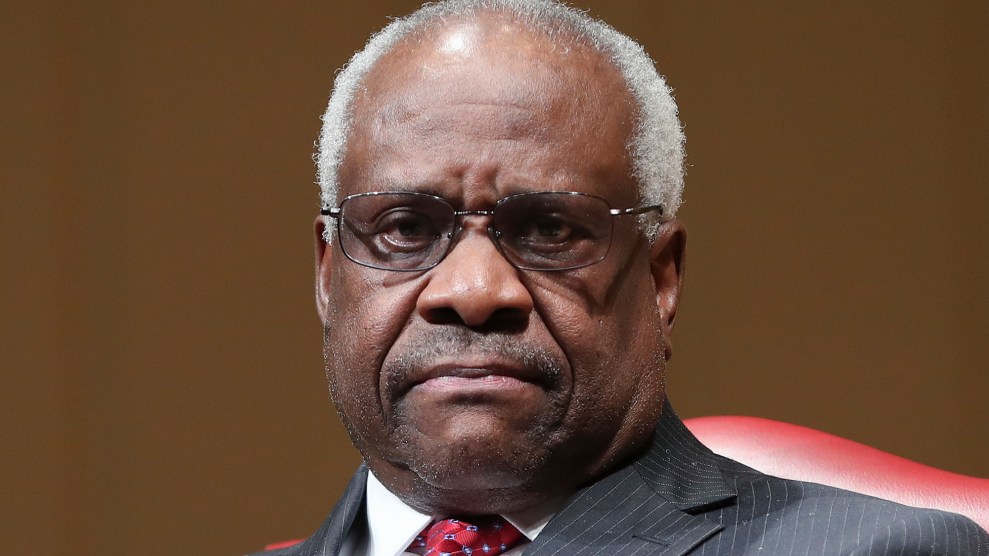 Republican legislators passing extreme abortion restrictions in red states around the country are hoping they can get the Supreme Court to reconsider Roe v. Wade and chip away at the right to an abortion. But on Tuesday, the court passed up on one of its best chances to do so.

For almost six months, the court has been sitting on a controversial abortion case involving a challenge to an Indiana law that would have banned abortions motivated by race, gender, or disability such as Down syndrome. But on Tuesday, the court declined to hear the Indiana case. The per curiam opinion explaining the court’s reasoning for the denial didn’t reveal the vote breakdown, but the decision was supported by at least one of the court’s most conservative members: Clarence Thomas.

Other states have passed similar laws to Indiana’s, all aimed at dismantling the court’s landmark Roe decision, which legalized abortion in 1973. Planned Parenthood of Indiana and Kentucky sued to block the Indiana law and won in lower courts, which found the law unconstitutional because it interfered with a woman’s health care decisions before the viability of a fetus. Reproductive rights activists had feared that the court’s long delay in deciding whether to take up the Indiana law might be a sign that with the addition of Justice Brett Kavanaugh, it was seriously considering upholding the statute, a move that would overturn decades of court precedent.

Tuesday’s decision in favor of Planned Parenthood wasn’t rooted in any sort of desire to preserve abortion rights, but rather in procedural issues. The opinion notes that only one appellate court, the 7th Circuit Court of Appeals, has ruled on the issue so far, meaning it’s too soon for the Supreme Court to wade into the messy issues involved. “We follow our ordinary practice of denying petitions insofar as they raise legal issues that have not been considered by additional Courts of Appeals,” the court said.

The opinion suggests, though, that the conservative wing of the court is sympathetic to laws that would ban abortion based on a woman’s reasoning for getting one. Thomas wrote a lengthy concurrence expounding on his view that abortion is a tool for race-based eugenics. “Given the potential for abortion to become a tool of eugenic manipulation, the Court will soon need to confront the constitutionality of laws like Indiana’s,” he wrote. “But because further percolation may assist our review of this issue of first impression, I join the Court in declining to take up the issue now.”

In the same order, the court also reversed a decision by the 7th Circuit to block another Indiana measure that would require fetal remains to be cremated or buried rather than disposed of as medical waste. The court found that the state had a legitimate interest in regulating the disposal of fetal remains and that Planned Parenthood hadn’t raised the issue of whether the disposal law posed an undue burden to a woman’s right to obtain an abortion. Both Justice Sonia Sotomayor and Justice Ruth Bader Ginsburg wrote separately to say they would have blocked the fetal remains law. “This case implicates ‘the right of [a] woman to choose to have an abortion before viability and to obtain it without undue interference from the State,’” Ginsburg wrote, arguing that Indiana’s petition should have been denied completely.

Indiana has one more controversial abortion case still pending before the court, involving a state law that would require women to undergo an ultrasound at least 18 hours before receiving an abortion. The 7th Circuit held that the law created an undue burden on a woman’s right to have an abortion, without any “known benefits,” and blocked its implementation. Indiana appealed to the Supreme Court, which will consider the petition again on Thursday.