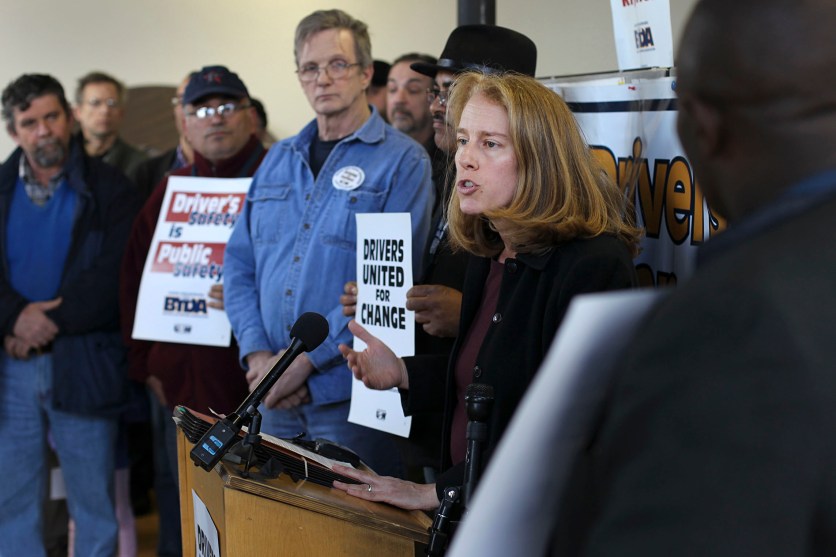 Markey was first elected to the House of Representatives in 1976 and moved to the Senate in 2013, after winning a special election to replace John Kerry, who had stepped down to become Secretary of State. With the exception of a 2013 primary to succeed Kerry, the last time Markey faced a Democratic challenger was 2002.

Liss-Riordan, a longtime labor lawyer who has successfully battled major companies like FedEx and American Airlines on behalf of workers, has gained national media attention in the last several years thanks to a slew of lawsuits she’s filed against major tech companies, including Uber and Lyft. Her suits have challenged the companies’ practice of classifying workers, from drivers to cleaners, as independent contractors instead of full employees. The common money-saving practice allows multi-million dollar gig economy companies to forgo paying for a number of worker benefits, including workers’ compensation, unemployment, and Social Security.

In 2015, I met with Liss-Riordan at her Boston office for a story about her legal fights agains Silicon Valley, where she spoke about what motivated her to file such lawsuits:

“These companies save massively by shifting many costs of running a business to the workers, profiting off the backs of their workers,” Liss-Riordan says with calm intensity as she sits in her Boston office, which is peppered with framed posters of Massachusetts Sen. Elizabeth Warren. The bustling block below is home to two coffee chains that Liss-Riordan has sued. If the Uber case succeeds, she tells me, “maybe that will make companies think twice about steamrolling over laws.”

She also spoke about the legal arguments made by tech companies, and how they’ve compared to what she’s seen in other industries:

When she litigated similar cases on behalf of cleaning workers, the cleaning companies claimed they were simply connecting broom-pushing “independent franchises” with customers. When she won several landmark cases brought by exotic dancers who had been misclassified as contractors, the strip clubs argued that they were “bars where you happen to have naked women dancing,” Liss-Riordan recounts with a wry smile. “The court said, ‘No. People come to your bar because of that entertainment. Adult entertainment. That’s your business.’”

Uber’s argument is pretty similar to that of the strip clubs. “Uber is obviously a car service,” she says, and to insist otherwise is “to deny the obvious.” An Uber spokesperson wouldn’t address that characterization, but said that drivers “love being their own boss” and “use Uber on their own terms: they control their use of the app, choosing when, how and where they drive.”

Some observers have suggested creating a new job category between employee and contractor. But Liss-Riordan is tired of hearing that labor laws should adapt to accommodate upstart tech companies, not the other way around: “Why should we tear apart laws that have been put in place over decades to help a $50 billion company like Uber at the expense of workers who are trying to pay their rent and feed their families?”

Liss-Riordan’s primary challenge comes on the heels of freshman Rep. Ayanna Pressley’s (D-Mass.) victory in the 2018 midterm elections, where she ousted 10-term incumbent Rep. Michael Capuano. In an email to supporters this week, Liss-Riordan explained that her work as a labor lawyer inspired her Senate run.

“I have spent the last 20 years as a workers’ rights attorney, fighting alongside those who have been taken advantage of by their employers,” she wrote. “The cases I have fought—for tipped workers, employees misclassified as independent contractors, and low wage workers—have made me realize just how much the rich and powerful have reshaped our country to benefit them. They have been writing the rules for too long—we need to make a change.”