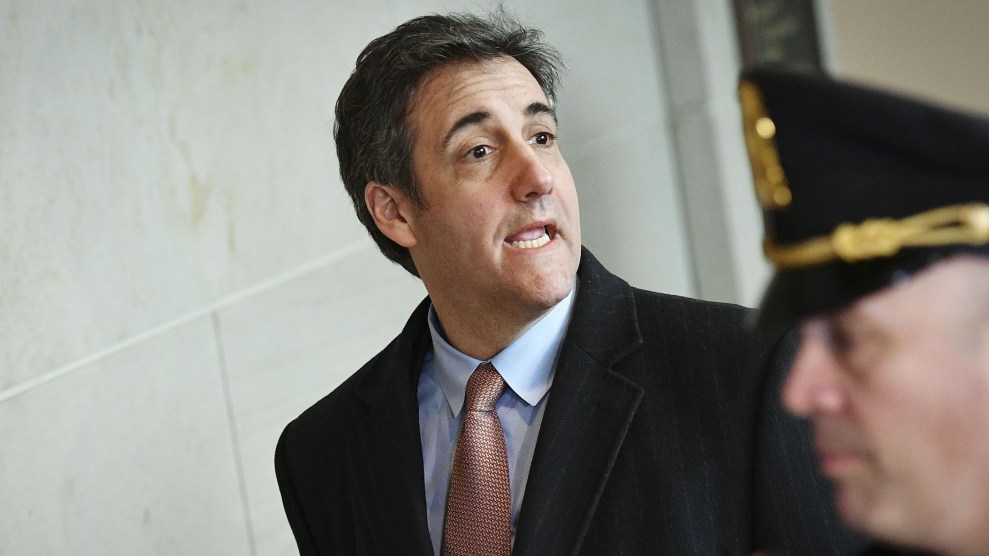 On Monday, the House Intelligence Committee released transcripts of two private interviews it conducted earlier this year with Michael Cohen. During these sessions, President Donald Trump’s former lawyer and fixer expanded on his public congressional testimony in February, filling in significant details and making some striking claims concerning Trump, his children, and their lawyers. These transcripts made news largely because Cohen maintained that Jay Sekulow, one of Trump’s lawyers, encouraged Cohen to lie to Congress about his efforts in 2016 to broker a deal to develop a Trump tower in Moscow, a claim Sekulow denies. Yet Cohen, who began serving a three-year prison sentence this month, presented other startling allegations, several of which have been mostly overlooked. Here are some of those highlights.

In his interviews with the House Intelligence Committee, Cohen recalled a May 2017 Oval Office meeting with Trump and Jay Sekulow, who would soon join Trump’s legal team. Though Cohen testified publicly that Trump uses “a code” to convey his wishes to subordinates, he told the committee that during this meeting Trump was less than subtle in encouraging him to deceive congressional investigators about the Trump Moscow project. “He goes: ‘Michael, why don’t you just cooperate?'” Cohen told the panel. “‘There’s no Russia, there’s no collusion, there’s no business, there’s no deals, and this is all going to be over.'” Trump and Cohen both knew this was false, Cohen said. Through June 2016, Cohen had kept Trump updated on the Moscow project, an effort that included Trump signing a letter of intent with a Russian company and Cohen seeking support from a top aide of Russian President Vladimir Putin. “And are you telling this committee that you understood him to be telling you indirectly to lie?” Rep. Sean Patrick Maloney (D-N.Y.) asked Cohen during one interview. “Yes,” Cohen replied. And Cohen did that in an August 28, 2017 letter to the House and Senate intelligence committees and in subsequent testimony before the panels, falsely claiming the project fizzled in January 2016 and that he did not recall any Russian government response to his outreach. He later acknowledged those lies in a 2018 guilty plea to making false statements to Congress.

Cohen told the intelligence committee that Sekulow and Abbe Lowell, who represents Jared Kushner and Ivanka Trump, helped prepare his letter to Congress and had reason to know it included lies. In addition, in edits to a draft of Cohen’s letter to lawmakers in August 2017, Lowell suggested that Cohen make four statements downplaying Ivanka Trump’s involvement in the Trump Moscow project. Three of those were false, Cohen said. For example, Lowell wanted Cohen to say Ivanka was not in “meetings or calls with people putting” the project together. But Cohen told the panel that he had briefed her on the effort and that she had connected him with a Russian who claimed he could help advance the deal. Cohen ultimately did not include these false claims in his 2017 letter and statements to Congress. But Cohen also pointed out that Lowell, Sekulow, and other lawyers representing Trump and his family, also had records of his communications that showed he had continued to pursue the deal until June. That means they had information showing his statements about about the timing of the Trump Moscow venture were bogus, he said. A spokesman for Lowell declined to comment on the record.

Cohen also asserted that Sekulow told him Trump had reviewed and approved of his false statements to Congress. “Sekulow said that he spoke to the client” — a reference to Trump — and that, you know, the client likes it and that it’s good,” Cohen testified. And after Cohen testified before the House and Senate Intelligence Committees, Sekulow told Cohen the president “heard you did a great job” and that “he loves you. Don’t worry,'” Cohen said. Cohen claimed he had multiple conversations with Sekulow about getting a pardon, noting that Sekulow told him that Trump was mulling a “global pardon” for people investigated for Russia contacts. In February, Sekulow said claim that he or other lawyers “edited or changed” Cohen’s statement to Congress “to alter the duration of the Trump Tower Moscow negotiations is completely false. In a statement issued Monday lawyers for Sekulow attacked Cohen’s credibility. “That this or any Committee would rely on the word of Michael Cohen for any purpose—much less to try and pierce the attorney-client privilege and discover confidential communications of four respected lawyers—defies logic, well-established law and common sense,” Jane Serene Raskin and Patrick Strawbridge, his attorneys, said.

Cohen told the committee one reason he decided to cooperate with prosecutors was because he didn’t believe the pardon talk floated by Trump emissaries. Special Counsel Robert Mueller’s report on Russian interference in the 2016 election details how lawyers appeared to dangle pardons to Cohen, to Trump’s former campaign chairman Paul Manafort (who told an associate that he expected to be “taken care of”), and others. But Cohen said Manafort, who drew a longer sentence after prosecutors determined he violated a cooperation deal by lying to them, and longtime Trump political adviser Roger Stone, who faces trial on obstruction and perjury charges, are wrong to bet on Trump. “He’ll never give Manafort or anybody a pardon because politically it’s not going to be good for him,” Cohen said. “So he’s going to keep it on message so that Manafort stays silent, and Roger Stone, and they just go along with, again, the narrative, but he’ll let them rot in jail forever. He just doesn’t care.”

Cohen elaborated on a claim that on July 18 or 19, 2016, he overheard a phone conversation between Stone and Trump in which the Republican operative said he had learned from WikiLeaks founder Julian Assange that in a few days the group planned to release a trove of Democratic emails ahead of the Democratic National Convention. Cohen said Trump welcomed WikiLeaks’ assistance not only because it would hurt Clinton but because “he’d [be] getting this information, this opposition research for free.”

Cohen stated again that he believed an infamous “pee tape” involving Trump doesn’t exist. But he told the intelligence committee that he had received a text message on October 30, 2017, from Giorgi Rtskhiladze, a businessman from the country of Georgia who had pushed an alternative Trump Moscow deal that Cohen said he passed on. The text said: “Stop flow of some tapes from Russia, but not sure if there’s anything else, just so you know.” According to the Mueller report, Cohen responded, “Tapes of what?” Rtskhiladze wrote back: “Not sure of the content but person in Moscow was bragging had tapes from Russia trip. Will try to dial you tomorrow but wanted to be aware. I’m sure it’s not a big deal but there are lots of stupid people.” Cohen told the intelligence committee that he first heard rumors of a tape, supposedly featuring prostitutes urinating on a bed in Trump’s Moscow hotel room, “a couple months” after Trump hosted the 2013 Miss Universe contest in Moscow with Aras Agalarov, a Russian construction mogul. Cohen said he was therefore not surprised by Rtskhiladze’s claim and did not think the tapes were legitimate.