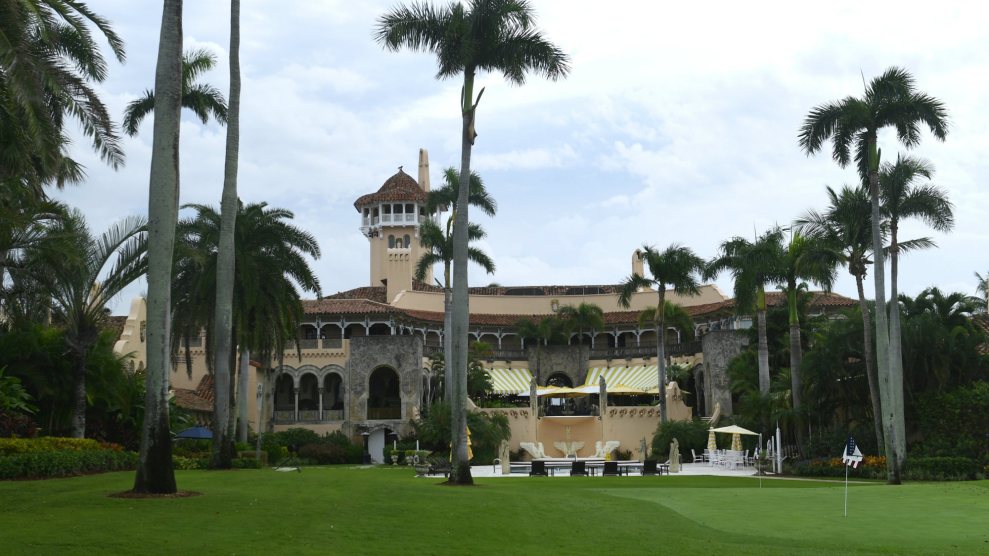 President Donald Trump’s latest personal financial disclosure was released Thursday afternoon, showing that Trump, who already owed more money than any other president in history, borrowed millions more in 2018 from a bank whose CEO won a federal appointment months later.

The most significant change to Trump’s finances may be the addition of the new debt.

Trump’s various businesses’ revenues were mixed, with declines at properties he rarely visits—as well as at his Mar-a-Lago resort—but increases at properties like his Washington D.C. hotel. While Trump did add revenue from online sales of branded products and saw increased sales of his bottled water, he recorded declines in areas more central to his business, including commissions earned through his realty firm.

The most significant change to Trump’s finances may be the addition of the new debt. According to the disclosure, Trump borrowed between $5 million and $25 million in May 2018 from Professional Bank, a small Florida outfit that specializes in construction and real estate loans. He borrowed the money at 4.5 percent interest through a limited liability company called 1125 South Ocean LLC. The loan was used to finance the purchase of 1125 South Ocean Avenue, a mansion located next door to Trump’s Mar-a-Lago club and owned by the president’s sister, Maryanne Trump Barry, a former federal judge. (Barry formally retired in February, ending a judicial ethics investigation into the family’s finances.)

Last year, Palm Beach-area newspapers reported that Trump’s sons, Donald Jr. and Eric, had purchased Barry’s property for $18.5 million. But Trump’s financial disclosure indicates that in fact he controls the company behind the transaction. Though assets and liabilities are reported in ranges on financial disclosure forms, land records show that the value of Trump’s newest loan was $11.2 million.

The house was quickly added to the Trump International Realty website, where it was offered for rent at a rate of $100,000 a month. As of Thursday, the house was still listed as available, but at the greatly reduced rate of $81,250 a month.

Kathleen Clark, an ethics expert and a law professor at Washington University in St. Louis, said the fact that a sitting president is seeking out loans from a bank raises conflict of interest questions.

“The concern is that the president would be treated differently by the bank,” Clark says. “There’s actually a record of banks having a VIP program and treating politically powerful people differently than everyone else. So this is a concern that is well grounded in past practice.”

There are no rules about presidents borrowing money, but Barack Obama was so concerned about the potential appearance of such conflicts of interest that he refused to refinance his Chicago home mortgage to a better rate when many homeowners did so, taking advantage of falling interest rates.

The president and chief executive officer of Professional Bank, Abel Iglesias, was appointed to the board of directors of the Miami branch of the Atlanta Federal Reserve in January. Jean Tate, a spokeswoman for the Atlanta Fed said it was the regional bank’s board of directors that had appointed Iglesias. Asked if the administration had any involvement with the appointment or if it had attempted to influence the decision, Tate would only say: “We are independent.”

Iglesias did not return a request for comment, nor did Professional Bank.

There are no rules about presidents borrowing, but Obama was so concerned he refused to refinance his mortgage.

Trump’s other finances were a mix of highs and lows. As has been the case in the last two years, the Trump Organization had few large real estate sales and no new major projects, but continued to collect a relatively steady stream of rent from properties it owns. Management fees and some royalties continued to roll in, and a handful of Trump’s golf courses reported increases in revenue. The majority—eight out of 12—saw revenues decline.

At the Trump International Hotel in Washington, D.C., which is not only a favorite hangout for Trump supporters, lobbyists, and administration officials but also plays host to events sponsored by conservative groups and foreign governments, there was a slight increase—just $400,000—in annual revenue, adding up to  $40.8 million in the 2018 calendar year. Meanwhile, Mar-a-Lago’s revenue dropped millions, from $25.1 million in 2017 to $22.6 million in 2018.

The revenue numbers provide only a narrow window into the president’s financial health, and without a picture of his operating costs, there’s no way of knowing the profitability of Trump’s various properties. But there are some signs that Trump’s brand is taking a hit. According to this most recent disclosure, Trump earned $1.6 million in commissions from his Trump International Realty firm—the lowest level since 2015, when he began making financial disclosures. In 2017, for example, Trump earned $2 million in real estate commissions, and in 2016, he earned $3.3 million.

When he took office, Trump refused to give up ownership of his business empire, instead putting all of his assets into a revocable trust which he said he would have no day-t0-day control over. The move, which kept ownership firmly in the president’s hands, was largely dismissed by ethics experts as paper shuffling with little practical effect, especially after it was revealed that Trump has the ability to withdraw money at any time from the trust.