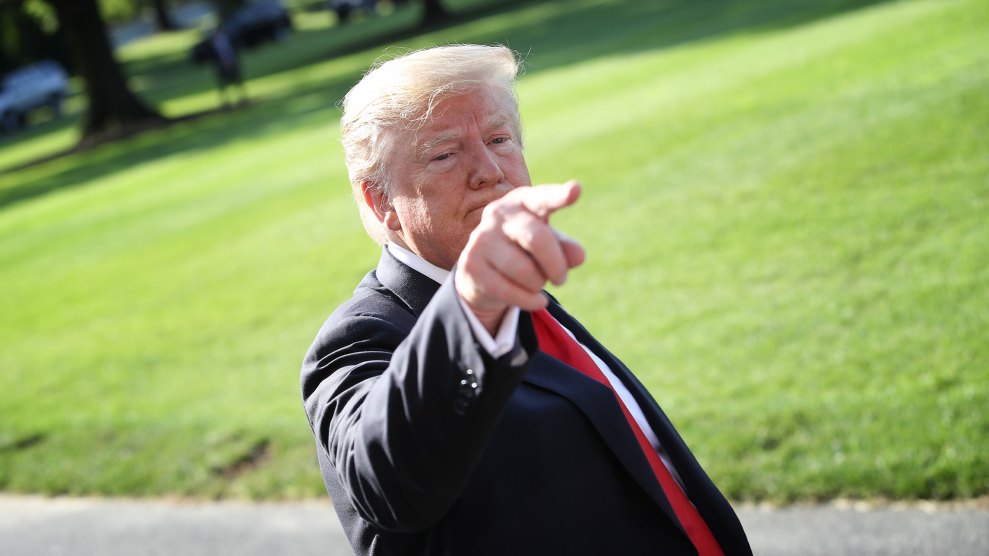 The White House announced Thursday night it will impose a 5 percent tariff on “every single good coming into the United States from Mexico” starting June 10 as a response to the continuing rise of Central American families apprehended at the US border.

And that’s just the starting point.

“If the Mexican government is incapable and unwilling to assist us, that tariff will go to 10 percent on July 1,” White House Acting Chief of Staff Mick Mulvaney said in a press call Thursday. He added that the tariff will go up by 5 percent each month until it reaches 25 percent in October if the number of people crossing the border doesn’t “come down substantially.”

When asked if the White House understood that US consumers would be the ones being punished by these tariffs, not Mexico—something the president has repeatedly misunderstood in various trade scuffles—Mulvaney said, “American are paying this right now, illegal immigration comes at a cost, the American tax payer is paying for what’s going on at the border.”

The announcement came hours after President Donald Trump tweeted a video of a large group of migrants crossing the border in El Paso, Texas. Customs and Border Protection said in a press release that the group of 1,306 people was the largest group ever apprehended at the border. The group included 934 members of families with kids, 63 unaccompanied minors, and only 39 single adults.

Yesterday, Border Patrol agents apprehended the largest group of illegal aliens ever: 1,036 people who illegally crossed the border in El Paso around 4am. Democrats need to stand by our incredible Border Patrol and finally fix the loopholes at our Border! pic.twitter.com/6K1rIUzorM

On the call Thursday, Acting Department of Homeland Security Secretary Kevin McAleenan called the situation at the border a “national emergency,” saying that agents are seeing an average of 4,500 people a day who are either crossing between ports of entry, or turning themselves over at official crossings. For context, McAleenan added, in May of 2017 the average number of daily crossings was 700.

“The month of May is on pace to be the highest month in crossings in over 12 years and will significantly surpass the record 109,000 in April,” McAleenan said. But historically, migration to the United States slows down in the summer months, particularly July and August, as temperatures rise. April and May, for example tend to have a high number of crossings before the slowdown begins. It’s possible that even in an unusually busy year, the summer slowdown may continue—something the White House could use to say its threats and tariffs worked.

Mulvaney also said that he “fully believed” that Mexico had the ability to stop people from coming through its country. Minutes later he noted he had “some level of confidence that the Mexican government will be able to help us in a timely fashion.”

“We don’t want to do this, but we do this in order to protect the country,” he said.

Trump and DHS officials have long turned to Mexico to stop Central American migrants from reaching the US border in the first place, and since last summer the administration has implemented policies that force Mexico to keep many of the migrants seeking to reach the United States. The Trump administration began limiting the number of people who can present themselves at official ports of entry to ask for asylum by implementing a metering policy. Mexico, willingly or unwillingly, has been keeping waitlists and working with US immigration officials to implement the lists. Mexico has also received Central American asylum-seekers after the United States returned them to Mexico under Trump’s Migration Protection Protocols policy. The country has further been enabling US policy by detaining large groups of migrants from Central America, mostly in the country’s southern states.

But all this doesn’t seem to be enough for the Trump administration.

On June 10th, the United States will impose a 5% Tariff on all goods coming into our Country from Mexico, until such time as illegal migrants coming through Mexico, and into our Country, STOP. The Tariff will gradually increase until the Illegal Immigration problem is remedied,..

There are still three more things Mexico can do to help stop migrants from reaching the United States, McAleenan said: Increase security at the border with Guatemala, stop criminal organizations and commercial buses from transporting migrants north, and align with the United States on asylum. “We need to be able to protect people in the first safe country they arrive in,” the acting secretary said.

Mulvaney said the International Emergency Economic Powers Act gives Trump the authority to impose these tariffs. The IEEPA was passed in 1977 and it allows the president to “deal with any unusual and extraordinary threat, which has its source” outside of the country if he first declares a national emergency.

The White House did not speak with any Democrats in Congress about this move, Mulvaney said.