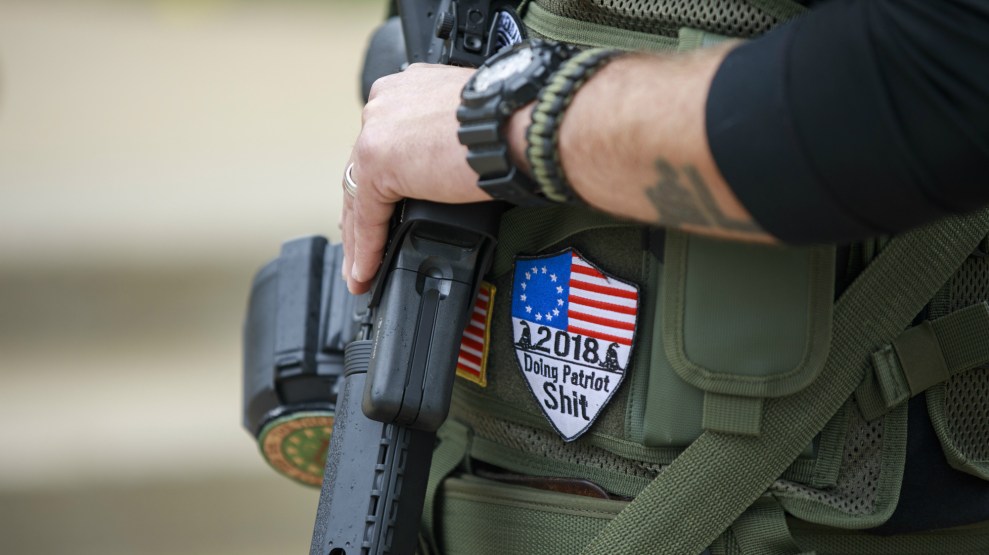 A member of the Three Percent militia in Indiana.Jeremy Hogan/SOPA/ZUMA

The Three Percenters’ Oregon chapter has gotten involved in the Oregon standoff between Republican state senators, who fled the state to avoid the passage of cap-and-trade legislation, and the Democratic majority who wanted to put the measure to a vote. The paramilitary group, known for anti-government and pro-gun sentiment, said in a Thursday night Facebook post, “We will stand together with unwavering resolve, doing whatever it takes to keep these Senators safe,” pledging to provide “security, transportation, and refuge” for Republican lawmakers.

As my colleague Shane Bauer wrote in 2016, “the three percenter philosophy” had “quickly grown into a grassroots, national movement, part of a resurgence of right-wing militia activity following Obama’s election in 2008.”

This is the most recent escalation of the conflict that began when the Oregon House of Representatives passed a bill Monday that would impose a declining limit on the amount of CO2 emissions Oregon’s manufacturing, utility, and transportation industries can produce. But when Senate president Peter Courtney was ready to begin Thursday’s session, Oregon’s Republican senators fled the Capitol to make a vote impossible to hold.

There are 18 Democratic senators, but 20 senators are needed for a quorum. A search of the Capitol on Monday yielded no Republicans, so Governor Kate Brown sent out Oregon State Police troopers to find the senators, who hid outside state lines, and bring them back to vote by force.

Without the Republicans present, there were not enough Democrats to constitute the necessary quorum of lawmakers to conduct official business, even though they would have had enough votes to pass the bill. There’s only about one week left in the legislative session.

“I beg and beseech my fellow legislators to come to the floor,” The Oregonian reported Courtney saying, as he placed his head in his hands. “If you’re mad, take it out on me. Come at me. Don’t do this to the people of Oregon.”

The tactic of walking out to prevent bills one party opposes from being passed isn’t unique to either Oregon or Republicans. As the Associated Press pointed out:

In 2003, Texas Democrats fled to neighboring Oklahoma to deny a quorum, holing up in a Holiday Inn to block a GOP redistricting bill. The Democrats returned to Texas after the bill’s deadline passed, and it was effectively killed.

In a statement by Oregon Senate Republicans released Thursday, Senate Republican Leader Herman Baertschiger, Jr. explained the reason for the walk out, describing it as the will of the people of Oregon. “Protesting cap and trade by walking out today represents our constituency and exactly how we should be doing our job,” he said. “It’s time for the majority party to consider all Oregonians—not just the ones in Portland.”

One Republican senator has already threatened a more violent response. “Send bachelors and come heavily armed,” said Brian Boquist in a video captured by Pat Dooris of KGW News in Portland. He said he told Travis Hampton, superintendent of the Oregon State Police, “I’m not going to be a political prisoner in the state of Oregon. It’s just that simple.”

But the Republican spokesperson from the Senate was quoted in a tweet on Friday afternoon, turning down the offer of assistance.

Oregon Senate R's response to offers of help from the Oregon Three Percenters, a wing of the anti-government militia movement?

"The Senators are not with any militias and are not accepting their help," says Senate Republican spokeswoman Kate Gillem.#orpol #orleg