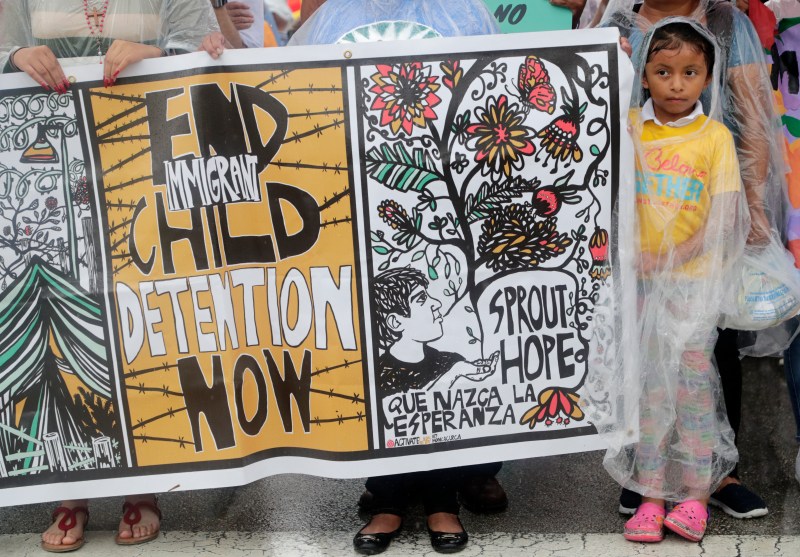 Diana Jimenez stands with her family during a protest outside of the Homestead Temporary Shelter for Unaccompanied Children, on June 16, 2019, in Homestead, Fla. Lynne Sladky/AP

“We are kept in a cage,” said the 17-year old migrant from Guatemala, who was being held with his 8-year-old nephew at a Customs and Border Protection facility in McAllen, Texas. “There is no room to move without stepping over the others. We were not given a mat to sleep on, so we had to sleep on the cold, concrete floor. The lights are on all the time. We were both very cold last night. I did not get any sleep, I stayed up worried about my nephew making sure he was safe.”

“I was very frightened and scared. I cried. I have not seen my father again.”

The teenager’s description of his time in custody appeared in a court document filed and released Wednesday night as part of a lawsuit alleging torturous conditions at CBP detention centers along the southwestern border. It’s just one of numerous gut-wrenching accounts from migrant children who, according to the suit, are being denied adequate food and medical care, clean water, and proper sleep. Other testimonials in the document come from doctors who recently visited the facilities.

According to the document, a 12-year-old from Guatemala told lawyers that he had been chronically underfed while in CBP custody but was too afraid of the guards to ask for more food.

“I’m hungry here at Clint all the time,” he said on June 18, referring to the Texas border patrol facility that has been the subject of recent news reports. “I’m so hungry that I’ve woken up in the middle of the night with hunger. Sometimes I wake up from hunger at 4 a.m., sometimes at other hours. I’m too scared to ask the officials here for any more food, even though there is not enough food here for me.”

He recounted a separate instance in which guards allegedly handcuffed another child who had managed to sneak in food and yelled at the group of children that “whoever has food will go to prison.”

Following a public outcry last week, hundreds of children were removed from the Clint facility. Since then, many have been sent back to it.

A 5-year-old who was in custody in Clint described the harrowing experience of being separated from her father and being brought to the CBP facility.

“I left Honduras with my father because Honduras is a dangerous place to live,” the child said. “I was apprehended with my father. The immigration agents separated me from my father right away. I was very frightened and scared. I cried. I have not seen my father again.”

“I have had a cold and cough for several days,” the child said. “I have not seen a doctor and I have not been given any medicine.”

Dolly Lucio Sevier, a pediatrician brought into the McAllen facility on June 15 to perform exams on the children and infants being housed there, noted grave concerns about the detention center.

“The conditions within which they are held could be compared to torture facilities,” said Sevier in her declaration. “That is extreme cold temperatures, lights on 24 hours a day, no adequate access to medical care, basic sanitation, water, or adequate food.”

Here are some of the detailed accounts from children held within the CBP facilities and doctors brought on to provide care: