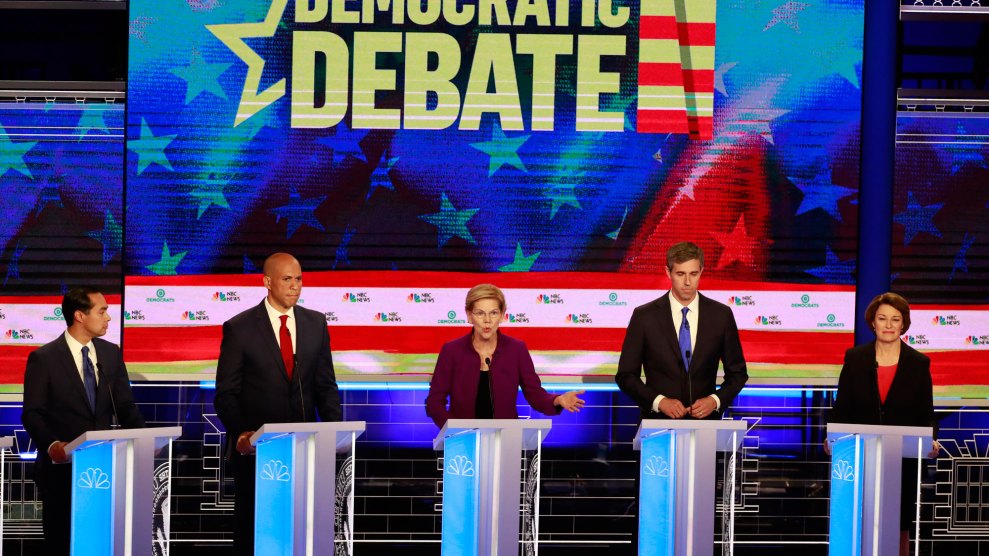 The first Democratic presidential debate didn’t focus on electability. There were no questions from NBC’s panel of moderators about polling numbers, gaffes, or the tone and rhetoric in Washington. For one night, it was as if President Donald Trump’s Twitter account didn’t even exist.

Instead, the 10 candidates who took the stage in Miami Wednesday night were peppered with a series of substantive questions about the policy fights that have consumed the party over the last two years. And they seemed perfectly content to talk about those issues. The result offered a revealing glimpse of just how much the Democratic policy conversation has evolved on a variety of issues—from economic inequality to climate to immigration.

It was also pretty good TV.

The tone was set early on. There were no opening statements—instead, Massachusetts Sen. Elizabeth Warren was asked point-blank at about 9:01 p.m. about her economic agenda. Former Texas Rep. Beto O’Rourke was asked if he’d support a top marginal tax rate of 70 percent, and if not, what he believed the top rate should be. New Jersey Sen. Cory Booker was asked about corporate consolidation. On and on down the line they went—New York City Mayor Bill de Blasio fielded a question about economic inequality in his city. Ohio Rep. Tim Ryan was asked about manufacturing.

It is difficult in any format—let alone a rapid-fire debate with nine other people—to pin down presidential candidates on these kinds of things, and not every question Wednesday received a satisfying answer. But it was significant that in arguably the dumbest era in American history, where policy is set while watching Fox & Friends, Democrats started off their presidential primary by talking in a serious way about their plans.

And those plans are a lot different than what voters saw in 2016 or 2008 or 2004. Perhaps that was partly a reflection of the composition of the candidates, with the populist Warren front and center. But when it comes to corporations, climate, housing, health care, immigration, and guns, the ground is moving fast. That became clear when the moderators asked for a show of hands on whether the candidates planned to abolish private health insurance. This is not something Barack Obama and Hillary Clinton (oh, and Joe Biden) were asked about in 2007. But on Wednesday, the highest-profile candidate on the stage, Warren, raised her hand.

“Yes, I’m with Bernie on Medicare for All,” she said, referring to the bill, sponsored by Vermont Sen. Bernie Sanders, that would replace private health insurance with a single-payer system.

.@lesterholtnbc: "Who here would abolish their private health insurance in favor of a government run plan?" #DemDebate pic.twitter.com/WKN7ukmREp

Most others kept their hands down, including Booker, who had previously signed onto Sanders’ proposal. But it was notable that the political debate has shifted to a degree that ending private health insurance has become a respectable progressive position, and that offering consumers the choice to purchase a government-sponsored health plan is now the moderate alternative.

A little while later, an argument broke out over immigration, when O’Rourke was asked what he would do about the plight of migrants on the southern border. O’Rourke, who has campaigned heavily on his experience as a lifelong resident of a border city, began to launch into a string of familiar platitudes. But he was interrupted by former HUD Secretary Julián Castro, a fellow Texan, who pressed him on a specific policy: Would O’Rourke support the repeal of Title 8 Section 1325 of the US code, which criminalizes illegal entry into the United States?

It’s a point Castro has made before—and pushed O’Rourke on—but section 1325 has never gotten such an airing in a primetime, nationally televised forum. That serious presidential candidates are coming out with proposals to decriminalize border crossings represents a major evolution in the party’s stance on immigration.

The difference between this year and years past was also notable when it came to climate change. Though the lack of specifics from the contenders left activists frustrated, it was another area where progressives had forced candidates and moderators to pay attention. More questions were asked about climate Wednesday (four) than at all four general election debates in 2016 combined (zero).

This shouldn’t come as a huge shock to people who have been following the primary, which started early and with urgency. The Democratic collapse in 2016 has led to an intellectual regeneration within the party, particularly on the left. Even as Democratic voters fret about what four more years of President Donald Trump would mean, they make clear to pollsters that they’d rather hear candidates talk about their own policy agendas. For one night, at least, the candidates and the moderators came through.