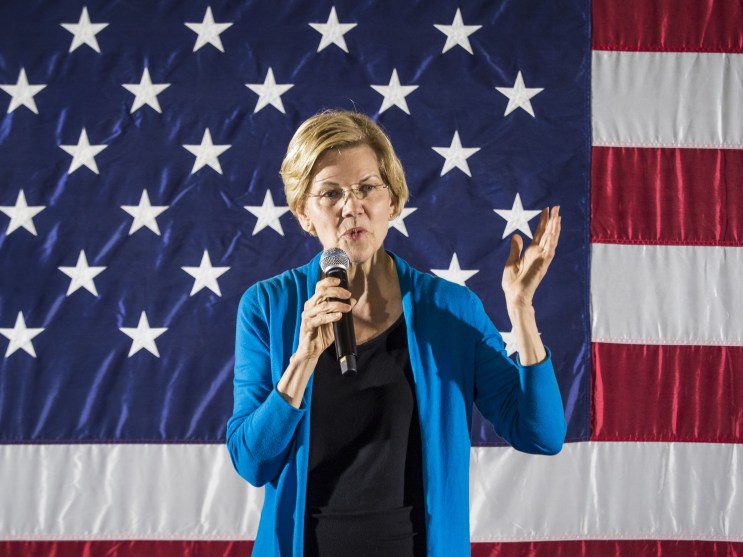 In the wake of the 2008 financial crisis, Elizabeth Warren, then a wonky law professor teaching at Harvard, led the effort to set up a new federal agency, a financial watchdog that would fight for American consumers against big banks. Two winning Senate campaigns and a decade later, she’s now a presidential candidate, and she wants to do it again, this time by creating an agency focused squarely on creating and improving middle-class American jobs.

Warren’s campaign outlined their new proposal on Tuesday in a Medium post, where she promises to pursue a policy agenda focused on “economic patriotism.” At the center of the plan is the creation of a Department of Economic Development that would, among other responsibilities, overhaul the federal government’s approach to international trade policy. A longtime Wall Street foe, Warren argues that international agreements like the North American Free Trade Agreement and other such pacts have encouraged business to take jobs and investments out of the US, enriching corporations and hurting American workers.

The center of the plan is the creation of a Department of Economic Development.

“America chose to pursue a trade policy that prioritized the interests of capital over the interests of American workers,” Warren writes. “It’s becoming easier and easier to shift capital and jobs from one country to another. That’s why our government has to care more about defending and creating American jobs than ever before—not less.”

In creating the new agency, Warren envisions replacing the Commerce Department, the Office of the US Trade Representative, and the Small Business Administration, as well as consolidating trade-related programs and offices from across government. “By placing our trade programs within this new Department, we will make clear that trade policy must defend and create American jobs,” writes Warren.

Beyond the new agency, Warren floats several other ideas. Warren wants to attach more conditions to public R&D funds that go to American companies from Apple to Amazon, ensuring the funds encourage job creation across the country, and requiring companies whose products grow out of federally-funded research to produce them in the US. Warren is also pushing to give Americans a financial stake in the projects their taxes help fund, either through equity, or by requiring companies to reinvest their profits into the American workforce through training programs or more production jobs.

Other aspects of the proposal include requiring the federal government to purchase American-made goods, encouraging more government spending to support American exports, and better managing the value of the US dollar to counteract countries who make their own exports more attractive by manipulating the value of their currency.

These proposals, writes Warren, would bring the US in line with major economic competitors like Germany, Japan, and China, which have more aggressively invested in domestic manufacturing and exports on behalf of their workers.

“This is a key and sensible proposal,” says Robert Scott, a senior economist at the Economic Policy Institute’s Policy Center. “We need to catch up with the Joneses. Other countries have coordinated trade and economic policy planning functions for decades.”

Warren would replace the Commerce Department, the Office of the US Trade Representative, and the Small Business Administration.

Scott notes that several federal agencies that deal with trade, from the Export-Import Bank to the Overseas Private Investment Corporation, focus on funding foreign investments—both by foreigners in the US, and by the US abroad. “These institutions have been captured by the interests that they serve—the multinational companies,” he says. “Reshuffling the deck, creating a new agency, asking what is our national interest and coming up with a plan to achieve it is correct.”

Warren also envisions a strong federal investment in worker training, pointing to Germany, where almost half of the workforce has graduated from an apprenticeship program. Warren calls for a $20 billion annual investment in apprenticeship training over the next ten years—ten times what’s currently appropriated—along with new programs intended to bring workers’ skills in alignment with local job demands.

“A successful approach to trade cannot only be the trade rules,” says Lori Wallach, a trade expert at Public Citizen, a progressive advocacy organization. “For the U.S. to have a successful trade policy, it has to make important changes: It needs the development of key sectors, public investment, publicly-supported training apprenticeships to gain skills—effectively, a comprehensive industrial policy.”

Warren’s vision is decidedly populist, as she calls ample attention to the “multinational profits” and “Wall Street bonuses” that have not benefited Americans workers. While her many campaign plans all share something of that quality, the economic plan released on Tuesday is the first to take direct aim at President Trump’s promise to renegotiate United States’ trade policies to the benefit of American workers. Trump won the White House with a vow to dismantle the North American Free Trade Agreement and the Trans-Pacific Partnership, holding them accountable, as Warren does, for sending American jobs overseas.

“Trump appropriated from progressives a critique of how these corporations rigged trade agreements to have a race-to-the-bottom in wages and gut working class communities,” Wallach says. “Half of what he does he takes from the progressive handbook, the other half is from the ‘I’m going to make it worse’ handbook.”

Warren’s plan also lays claim to turf that’s so far been dominated by Vermont Sen. Bernie Sanders, who has long railed against free trade even as powerful Democratic politicians backed it. Sanders’ vision echoes Warren’s proposal: He has called for an end to incentives that encourage multinational corporations to send jobs abroad and create enforceable rules against “currency cheating.” She joins him in drawing a strong contrast with former vice president Joe Biden, the crowded field’s current frontrunner, whose long-standing allegiance with elements of organized labor could be complicated by his continued support for trade policies unpopular with manufacturing workers.

“That puts him out of touch not just with Democratic voters, but most of the country who have come to understand that we have a serious problem with our current trade policies,” Wallach says. A Biden spokesperson recently told Vice News that Biden will share a “vision for a progressive trade policy in which labor unions and environmental advocates are directly at the table” in the coming months.