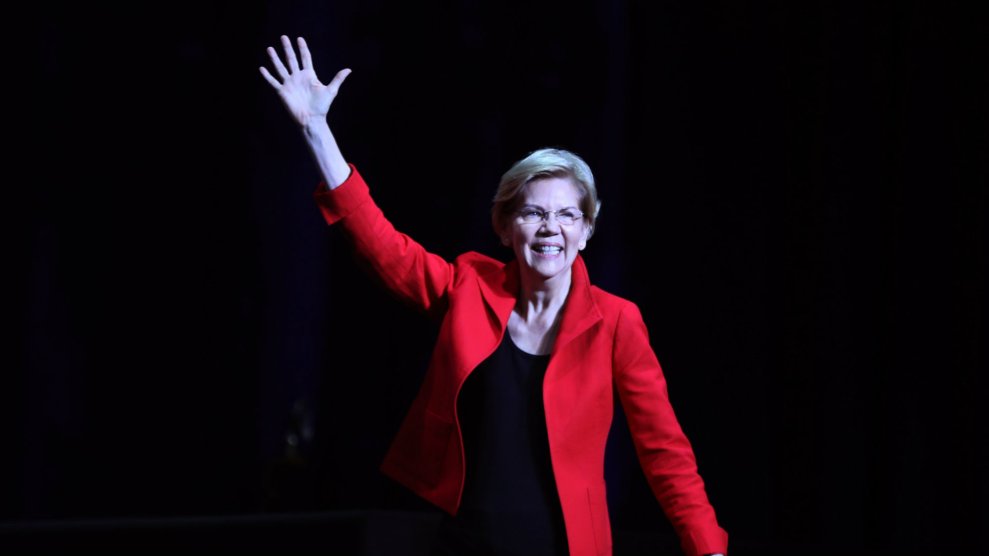 Elizabeth Warren has ascended in recent Democratic presidential polls atop a growing stack of audacious proposals to wipe out student debt, break up giant companies like Amazon and Facebook, and slap new taxes on the ultra-rich.

Yet the senator from Massachusetts is taking a different approach to the climate crisis, weaving a patchwork that will likely amount to Warren’s answer to the Green New Deal.

In February, Warren co-sponsored the Green New Deal resolution that Sen. Ed Markey (D-Mass.) and Rep. Alexandria Ocasio-Cortez (D-N.Y.) introduced. In April, Warren released a public lands plan, promising to sign executive orders to ban new fossil fuel leases on federal acres and demarcate more areas for renewable energy. In May, she outlined a plan to dramatically slash emissions generated by the US military, one of the world’s biggest polluters.

On Tuesday, the Warren campaign released its most comprehensive climate plan yet, a $2 trillion package that commits the federal government to spend $150 billion a year over the next decade on low-carbon technology, increases energy research funding tenfold and funds a $100 billion Green Marshall Plan to aid the poorer countries projected to suffer the worst as global temperatures rise.

In modeling her proposals on the post-World War II Marshall Plan aid package that helped rebuild Western Europe, Warren takes stock of the global nature of the crisis.

“The climate crisis demands immediate and bold action,” Warren wrote in a Medium post that appeared on Tuesday morning. “Like we have before, we should bank on American ingenuity and American workers to lead the global effort to face down this threat—and create more than a million good jobs here at home.”

The plan would add a quarter million jobs in 2020, with employment up 1.2 million by 2029, according to an analysis by Moody’s.

The proposal came out the same day Joe Biden, who is leading in the polls for the Democratic nomination, released his $5 trillion climate plan, embracing the Green New Deal.

The plan proposes a new National Institute of Clean Energy, modeled on the National Institutes of Health, to ramp up research in costly but vital areas, including aviation and long-term battery storage, with $400 billion in spending over a decade.

The centerpiece of the policy proposal is a pledge to directly spend $1.5 trillion over a decade on renewable electricity, electric vehicles and energy-efficient lightbulbs in a bid to hasten a market shift. Warren would require companies selling clean technology to the federal government to pay a $15 minimum wage, respect union organizing and guarantee at least 12 weeks of paid leave.

The policy announcement comes as Warren’s 2020 rivals are pumping out bold climate policies that promise to fundamentally reshape the United States economy.

Former Rep. Beto O’Rourke (D-Texas) proposed a $5 trillion economy-wide effort to zero out emissions by 2050. Washington Gov. Jay Inslee sped ahead with a detailed 15,000-word proposal for a $9 trillion federal effort to eliminate emissions from vehicles, utilities and new construction by 2030 while repealing right-to-work laws that make it harder to unionize. Sen. Michael Bennet, a long-shot centrist, put out a farmer-focused climate package. Former Rep. John Delaney (D-Md.) introduced a $4 trillion plan to put a price on carbon emissions and build out carbon-capture technology.

The international focus of Warren’s plan stands out. Climate refugees are gaining attention as global warming projections worsen and immigration remains a hot-button issue across the developed world. And the disproportionate role that countries like the US played in emitting the greenhouse gases causing the warming casts the geopolitical narrative in stark terms.