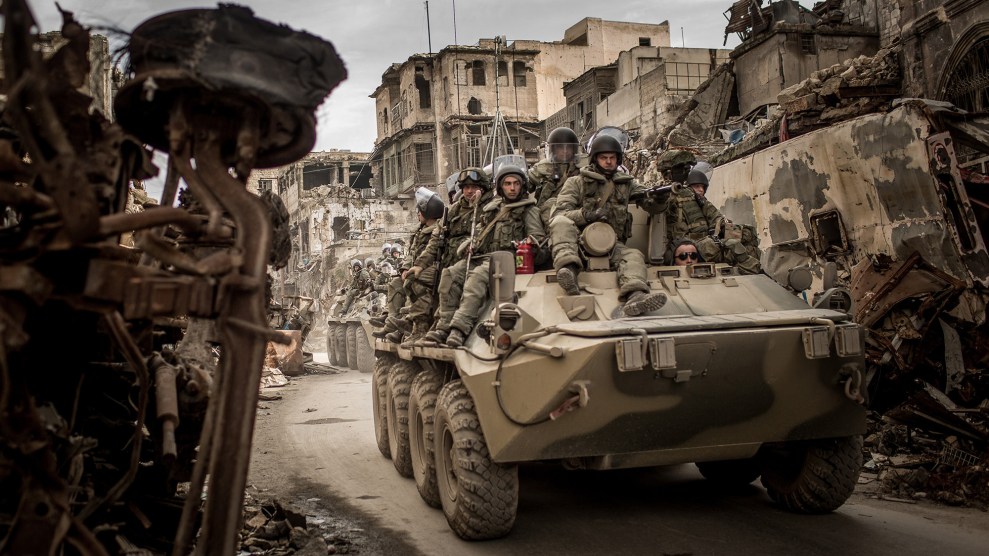 Syria’s civil war doesn’t have two clearly defined sides. Hundreds of opposition groups have taken up arms against the Assad government—and sometimes each other. The conflict has also become a proxy war for countries including the United States, Russia, Iran, and Turkey. Not to mention the Kurds, Hezbollah, and ISIS. Here are the main players you need to know:

President Bashar al-Assad’s regime has used everything from torture to chemical weapons to fend off the rebellion sparked in 2011. It has also gotten a boost from Russia and Iran as well as Hezbollah and pro-regime militias.

Russia and Syria have been allies since the Cold War. In 2015, Russia officially intervened with troops and airstrikes aimed at opposition groups. It has blocked international action against Assad by vetoing UN Security Council proposals. As many as 2,500 Russian mercenaries with the private military company Wagner are reportedly fighting in Syria.

Iran, a long-standing ally of the Assad regime, has deployed the elite Islamic Revolutionary Guard Corps in Syria, provided weapons and intelligence to the government, and sent Pakistani and Afghan mercenaries to fight in pro-Assad militias.

Turkey has backed the Syrian opposition since the beginning of the conflict, and its troops have fought alongside the Free Syrian Army. It has conducted airstrikes against ISIS as well as Kurdish forces. It currently occupies part of northwestern Syria.

In 2011, the Obama administration called for Assad to step down. The CIA provided training and weapons to anti-government fighters until 2017, when President Trump suspended the program and dropped the call for Assad’s resignation. As ISIS spread in Syria and Iraq, the United States responded with airstrikes, special forces troops, and support for Kurdish-led forces. It also heads the international coalition targeting ISIS. Trump has repeatedly said that US troops will come home quickly once ISIS has been crushed.

Since 2014, the United States has led the Global Coalition to Defeat ISIS, a group of 79 countries that includes much of Europe as well as Turkey, Saudi Arabia, Qatar, Iraq, and six other Middle Eastern nations.

While they don’t always see eye to eye, these oil-rich monarchies have poured billions into aiding and arming the Syrian opposition, while private citizens have quietly funded Nusra and jihadist groups.

Iraq, which has conducted airstrikes on ISIS inside Syria, may play a larger role in the fight if the US withdraws.

Israel, which has occupied the Golan Heights since 1967, has launched airstrikes on Iranian targets, Hezbollah, and other militias in Syria. In 2018, Israel’s intelligence minister said it had taken military action in Syria more than 200 times.

This Shiite political party and militant group formed in 1985 to oppose Israel’s occupation of Lebanon. Hezbollah has long used Syria as a conduit for military support from Iran, its main patron. Its fighters have battled Sunni opposition groups like the FSA, aided by Russian forces.

Founded in 2011 by Syrian army defectors, the FSA is an umbrella of rebel groups opposed to the Assad regime. Its many factions have at times pursued conflicting political and military aims, and it has lost much of its relevance as the government has retaken its strongholds like Aleppo and Homs.

Jabhat al-Nusra was founded in 2011 under the direction of Al Qaeda in Iraq leader Abu Bakr al-Baghdadi. The Nusra Front quickly integrated itself into the wider Syrian opposition. It split with Baghdadi after the creation of ISIS in 2013. In 2016, Nusra announced that it had severed ties with Al Qaeda. It is now known as Hay’at Tahrir al-Sham.

Formed by Baghdadi in 2013, ISIS sought to create a caliphate in the swath of territory it occupied in Syria and Iraq. By early 2019, ISIS had been almost entirely defeated in Syria, but militants throughout the Middle East and North Africa still claim allegiance to it.

Recently supported by the United States and allied with Russia until 2018, the SDF is a coalition of Kurdish and Arab militias led by the Kurdish People’s Protection Units (YPG), primarily focused on fighting ISIS and defending the Democratic Federation of Northern Syria.

The PYD founded Rojava, the semi-autonomous, Kurdish-majority region of northeastern Syria. It is an offshoot of the Kurdistan Workers’ Party (PKK), the militant nationalist party founded by Abdullah Öcalan, who is serving a life sentence in a Turkish prison. Turkey considers the PKK a terrorist group.

The YPG is the military arm of the PYD and leads the US-backed SDF. The YPJ is the PYD’s all-women militia. Both fought against ISIS in northern Syria and in the campaign to take Raqqa, the Islamic State’s de facto Syrian capital.