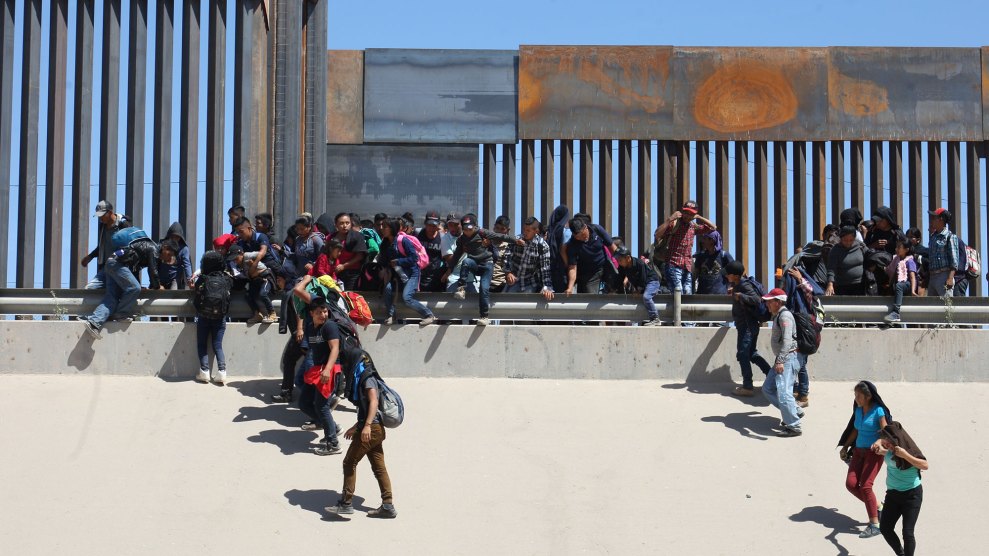 Five hundred Central American migrants entered the United States illegally under a bridge from Ciudad Juarez on May 9.David Peinado/NurPhoto via Getty Images

The number of migrants crossing the US-Mexico border surged to another record high in May, climbing to more than 144,000 as the Trump administration’s efforts to deter migrants continue to flounder.

The biggest increase comes among parents and children traveling together, who now account for about two-thirds of the people crossing the border. May saw 88,676 parents and children stopped at the border, up from fewer than 15,000 last May. More families crossed the border in May alone than in any full year prior to 2018. “I’ve never seen anything like it, frankly, in the 24 years that I’ve been doing this job,” Brian Hastings, Border Patrol’s chief of operations, told reporters on Wednesday.

The Trump administration argues that the increase is being driven by word spreading among migrants that the United States quickly releases families who turn themselves in to Border Patrol agents. Families cannot be detained for more than about 20 days under a court settlement, but the vast majority of families are released after a few days due to limited detention capacity.

Customs and Border Protection now has about 19,000 people in its custody. In March, when that figure was only 13,000, then-CBP Commissioner Kevin McAleenan called it “unprecedented” and said that having just 6,000 people in CBP custody would constitute a “crisis level.”

This year has also seen a rise in groups of more than 100 migrants turning themselves in to Border Patrol agents. Howe said that 182 of those groups have been encountered at the border this year, up from just two in 2017. On May 29, CBP released video of more than 1,000 people crossing into Texas as a single group. CBP said it was the largest group ever encountered.

Wednesday’s data release comes just five days before the White House begins imposing a 5 percent tariff on all goods coming from Mexico. President Donald Trump is threatening to increase the tariffs by 5 percent each month until the number of Central Americans arriving at the US border goes down significantly, but his administration has not specified what would constitute a sufficient drop.