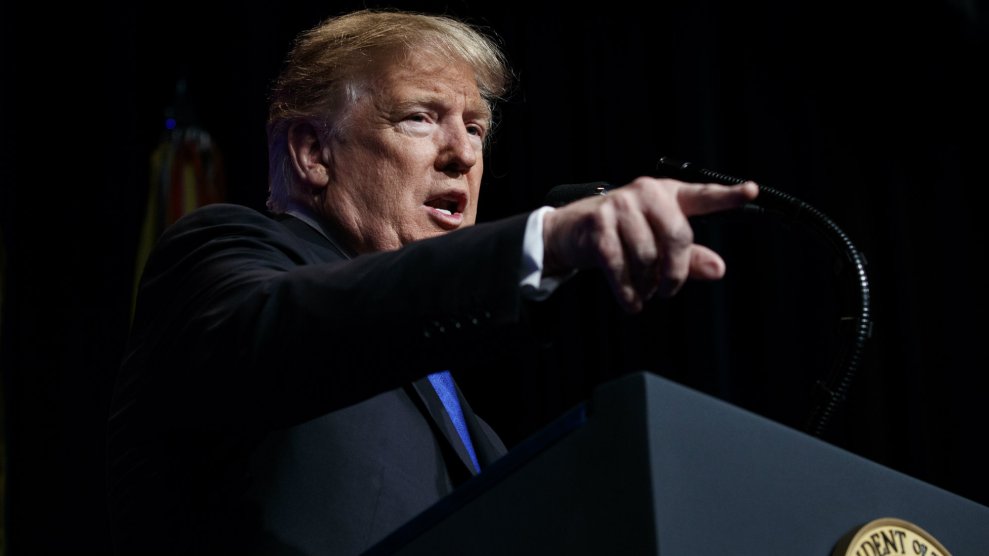 Congress completed its most significant step toward funding the Pentagon for the next year—and it only took close to 21 hours. By 6:53 a.m. this morning, when House Armed Services Committee Chair Adam Smith (D-Wash.) gaveled his panel out of session, members had resurrected President Trump’s beloved Space Force, blocked the Pentagon from using so-called “baby nukes,” and laid the groundwork for an independent process of adjudicating sexual assaults in the military.

For 58 straight years, the National Defense Authorization Act, as the spending bill is formally called, has cleared both chambers of Congress, often with broad bipartisan majorities. This time around, only two Republicans out of 26 who serve on the committee voted for the complete, amended bill, which Rep. Mac Thornberry (R-Texas), the highest-ranking GOP member, said “sadly takes our military backwards in several key areas.”

Republicans were stymied on their No. 1 issue, which was the total national security budget, which includes the Pentagon and national-security related programs at the Energy Department and other agencies. Thornberry wanted it to be $750 billion, the figure approved by the Senate Armed Services panel. Smith got his way with a smaller, $733 billion topline. The bill still has to make its way through the full House and be reconciled with the bill eventually passed by the Senate, but there’s no predicting what final figure Trump will embrace. The commander in chief has been all over the place as to what he wants; in October, he pushed for $700 billion, saying last year’s $716 billion in defense spending was “crazy,” but months later, he acceded to the Pentagon’s request for $750 billion.

As for the rest of the committee’s work, here’s what generated the most interest from lawmakers, and what that suggests about the final bill the president may or may not sign:

Congress wrestled with the idea of a sixth branch of the military dedicated entirely to space well before Trump unveiled the idea last year. Reps. Mike Rogers (R-Ala.) and Jim Cooper (D-Tenn.) floated the idea for an independent “Space Corps” within the Air Force two years ago, but the idea was met with immediate opposition from the Air Force and never appeared in the final bill passed by Congress. This time around, their nearly identical proposal may actually be funded—so Netflix, which ordered a Space Force-centered television show starring Steve Carell last year, can breathe a sigh of relief.

The version adopted unanimously by voice vote in the House committee differs from the idea embraced by the Senate Armed Services Committee last month, but contains some similarities. Both the House and Senate situated the unit within the Air Force, much in the same way the Marine Corps functions as a component of the Navy, but the Senate’s version would fully fund it at $72.4 million, close to what the White House had requested. The House did not specify a funding level yet, though last month, the House Appropriations Committee only approved $15 million to study the idea, over the White House’s objections. Then there’s the matter of its name. The Senate went with “Space Force” but the House stuck with “Space Corps.” Trump’s reelection campaign has already pledged to sell branded Space Force apparel, so a name change this late in the game may face other complications.

Few issues divided the House panel more last night than whether the Pentagon should deploy a “new low-yield W76-2 nuclear warhead on submarines.” While not exactly a kitchen-table issue, the presence of a more limited type of warhead is crucial to any debate over nuclear proliferation in the Trump era and a flashpoint in the increasingly partisan debate over America’s nuclear stockpile.

The White House and its allies on the committee want to protect funding for the W76-2, a type of low-yield nuclear warhead that went into production in January. House Democrats, including Smith, pushed back, fearing that a stockpile of low-yield and high-yield nukes could confuse an adversary and incite a disproportionate response. Smith said earlier this week that cutting funding for the warhead, which the committee agreed to do in a series of party-line votes, could stop “some nitwit over at the Pentagon” from initiating a nuclear war.

Republicans on the committee, like Rep. Liz Cheney (R-WY), who unsuccessfully floated the amendments that would have preserved the program, blasted that explanation. “It is unilateral disarmament by definition,” Cheney told Smith during the markup. “This is a capability that our adversaries have. It is a capability that they have the ability to deploy.” Alexandra Bell, a former Obama State Department official, had her own response to Cheney on Twitter: “How can not deploying a weapon that is not yet deployed amount to disarmament?”

That’s a question the Republicans will have a chance to answer when the bill is debated on the House floor and eventually reconciled with the Senate’s version, which almost certainly will retain funding for these nukes.

Committee members adopted a number of provisions related to sexual assault, including a proposal from Rep. Jackie Speier (D-Calif.) that would substantially change how these cases are handled at military service academies. Speier’s amendment would divert responsibility for adjudicating these cases from military leaders to an independent prosecutor. The four-year pilot program, if ultimately implemented, would constitute “a significant victory” for critics of the current system, who have long complained about problems with the current model of resolving sexual assault cases within the chain of command, Roll Call reported.

Reported instances of sexual assault more than doubled between 2016 and 2018 at the US Military Academy, a Pentagon report found in January. Across the service academies, which include West Point, Annapolis, and the Air Force Academy in Colorado Springs, students reported a 47 percent increase in instances of unwanted sexual contact over that same time.

Some committee Republicans, such as Rep. Mike Turner (R-Ohio), argued for an alternative solution that would look more broadly at the chain of command’s role in cases of sexual violence, but his idea only won support from one Democrat, retired Navy officer Elaine Luria (D-VA), and was shot down in favor of Speier’s plan. A separate amendment from Speier to protect survivors of sexual assault from being punished for military crimes like disorderly conduct or breaking curfew also passed.

Painting Air Force One gold (or any other color) will have to wait.

Last year, Trump promised big plans for Air Force One. “Air Force One is going to be incredible,” he told CBS News. “It’s gonna be the top of the line, the top in the world. And it’s gonna be red, white, and blue, which I think is appropriate.”

Not so fast, House Democrats responded.

In yet another party-line vote, the House Armed Services committee blocked future presidents from tinkering with the plane’s “paint scheme, interiors, and livery” without congressional approval. Members were surprisingly passionate about the issue, which was a none-too-subtle jab at Trump’s stated plan to paint Air Force One in the style of his red, white, and blue private jet.

As committee member Rep. John Garamendi (D-CA) said on Twitter, “I don’t want Air Force One, an iconic symbol of the United States, to be painted red, gold, or whatever else this President would do to look like surplus inventory from the defunct Trump Airlines.”