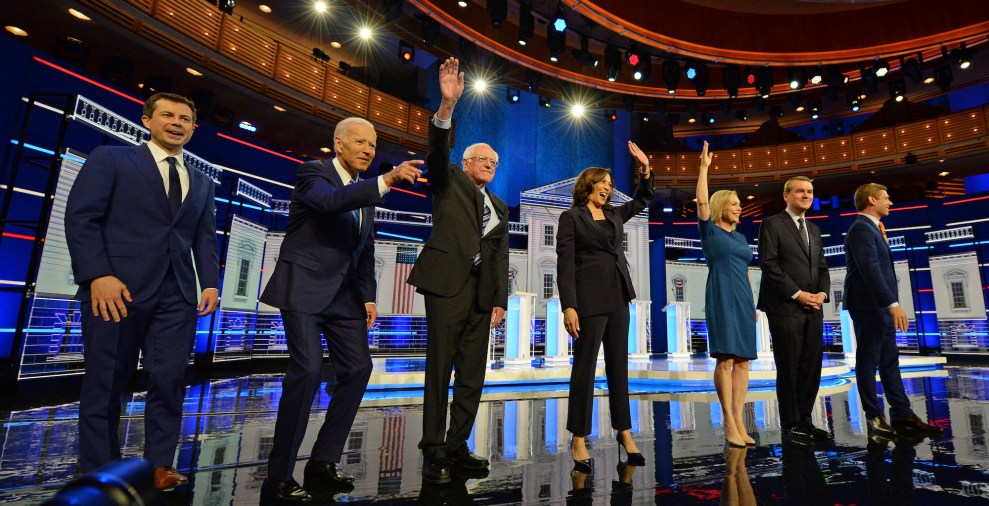 For 60 hours this week, dozens of young activists occupied the front steps of the Democratic National Committee headquarters, bearing the extreme heat and humidity of D.C. summers, the mosquitoes, and some rain to camp out in sleeping bags. They were 1,000 miles away from Kamala Harris, standing on the debate stage in Miami, when she took a detour from the usual political cliches to say, on Thursday night, “It’s a climate crisis. It represents an existential threat to us as a species…That is why I support a Green New Deal.”

“It’s disgraceful to give candidate 15 minutes and think that’s a way to adequately discuss the climate crisis,” said one activist.

Eighty people burst into cheers and applause at the first endorsement of the proposed climate resolution in two days of debates among the candidates vying to win the Democratic nomination for next year’s presidential election. Wearing their black-and-yellow Sunrise Movement t-shirts, they watched the results of their year-long efforts to inject climate change into national politics, using a projector aimed at a sheet propped up on a red pickup truck.

Sunrise Movement, a relatively new advocacy group that’s attracted 20-somethings and teenagers to the fight against climate change, ended a two-and-a-half day protest Thursday night when the first presidential debates closed. They didn’t get what they were there demanding—for the DNC to hold its first-ever climate change debate. And they argued that this week’s debates proved their point that climate won’t get enough attention without a dedicated debate.

Benjamin Finegan, 22, said he thought that during the first night of the debates, the candidates paid mostly “lip service” to the issue. Hannah Perry, 23, said Friday morning, after spending almost 50 hours at the sit-in, “It’s disgraceful to give candidate 15 minutes and think that’s a way to adequately discuss the climate crisis.”

Yet the fact that NBC devoted even 15 minutes to the subject during the first debates is a departure—and a sign of the tectonic shifts in political opinion in less than a year. Climate is now the leading issue named regularly in polling of Democratic primary voters, after years on the bottom. Sunrise activists, however, said they were just getting started.

“I’m tired,” Sunrise’s DC Hub Coordinator Hannah Perry, 23, told me, with a laugh. “Our goal doing this is to make all our institutions feel the climate crisis as deeply and painfully as we do.” Sunrise now plans to stage similar protests across the country, showing up at state and national Democratic offices in advance of a possible DNC resolution coming up for a vote this summer to hold a climate debate.

Their message seems to be catching on. Fifteen presidential candidates have endorsed the climate debate, and after his own network’s debate ended, MSNBC’s Chris Hayes endorsed it, tweeting: “I think I’ve changed my mind on the need for a climate debate. I see the DNC’s point that it opens up a set of asks for other specifically themed debates. BUT there is just nothing like the climate crisis and no way to wrestle with its scope in the context of a general debate.”

According to a poll released this week by an environmental group, the most popular platform point Democrats have—the call for 100 percent renewable energy within the next 10 to 30 years—never even came up. And aside from Harris’s mention and John Hickenlooper’s criticism of it, the Green New Deal vision for a clean energy economy also barely received mention. That’s strange considering that most of the Democratic candidates, except Hickenlooper, have embraced the central ideas of it, and many of the frontrunners have put forth their own plans.

“Sixty-second sound bites, which is all you’ll be able to get in a party debate, is grossly inadequate to the task” of discussing climate change, said Jay Inslee.

The Sunrise Movement members aren’t the only activists calling for the candidates to talk more about climate. “Let’s have a really robust conversation about what we want as a society as we’re getting out of the climate crisis and a sense of stability, said US Climate Action Network Executive Director Keya Chatterjee. “What are the positive visions each has to offer?” Greenpeace’s US Climate Campaigns Director Janet Redman agreed. “Frankly I don’t think we see an indicator that candidates aren’t willing to talk about solutions,” she said. “But I think they need more time to state the case.”

The science shows that the worsening crisis affects everything from national security to the economy, to everyday health, to livelihoods—not to mention the rest of younger generations’ lives. But the niche treatment that climate receives, climate advocates argue, doesn’t begin to get to the scale of the problem. They also point out that debates don’t just get the candidates on record about the issue; they can also educate voters about both problems and solutions—if there’s enough time allowed for a robust discussion.

Indeed, Washington governor and presidential hopeful Jay Inslee made a prediction to me weeks ago when he joined young activists in demanding a climate-focused debate from the DNC. “You have to understand how constricted the opportunity for a full discussion for this will be” during the Democratic debate, he said. “Sixty-second sound bites, which is all you’ll be able to get in a party debate, is grossly inadequate to the task.”