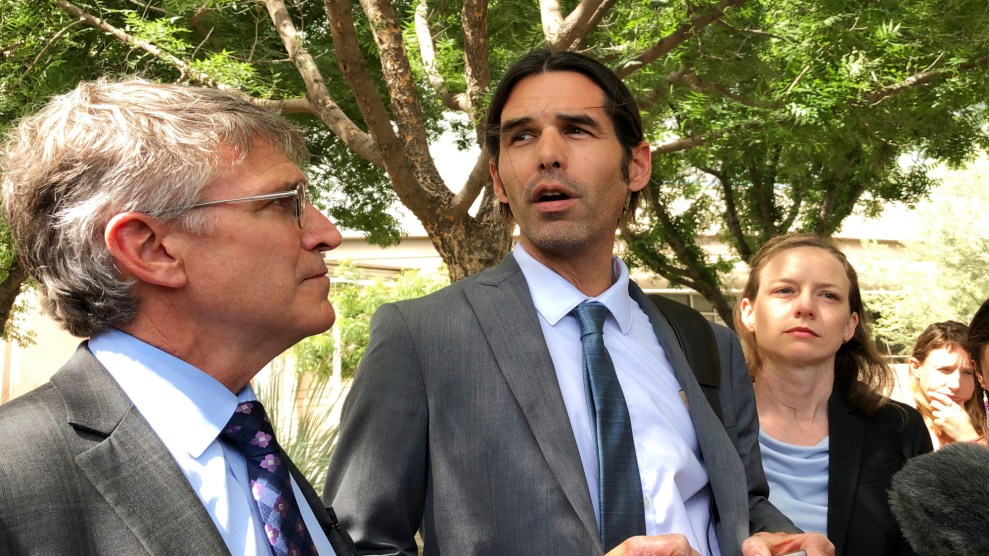 The highly publicized federal case against humanitarian aid worker Scott Warren, who was accused of helping migrants at the US-Mexico border, ended in a mistrial on Tuesday. Warren, a volunteer with the humanitarian aid group No More Deaths, was charged with one count of conspiracy to transport and two counts of harboring undocumented immigrants following a 2018 arrest. He was facing up to 20 years in prison.

Since 2004, volunteers with No More Deaths have left food, water, and other supplies for people crossing over the harsh desert of the US-Mexico borderlands. In January 2018, two Central American migrants—Jose Sacaria-Goday and Kristian Perez-Villanueva—showed up at No More Death’s aid camp, The Barn, in Ajo, Arizona. According to The Intercept, Warren found the men shortly after and gave them food, water, clean clothes, and shelter. Border Patrol agents spotted the group outside of The Barn several days later, and say they saw Warren pointing north while speaking to the men. They accused him of instructing the migrants on how to bypass a nearby Border Patrol checkpoint.

Last month, Amnesty International released a statement urging the US government to drop all charges in the case. “The US government is legally required to prevent the arbitrary deaths of migrants and asylum seekers in border areas,” said Erika Guevara-Rosas, Americas director at Amnesty International. The group also created a campaign online where people can email US attorney Michael Bailey urging him to drop the charges. Nearly 19,000 emails have been sent so far.

The jury was tasked with deciding whether Warren’s intent was to aid Goday and Villanueva further into the US by shielding them from law enforcement or if it was to simply provide humanitarian help. After three days of deliberations, it failed to reach a unanimous decision—eight jurors sided with Warren, while four thought he was guilty. While the hung jury is a win for Warren, the victory may be temporary. A status hearing is set for July 2 to determine whether or not the government will seek a new trial.

In an op-ed published in the Washington Post last month, Warren warned that his case “may set a dangerous precedent, as the government expands its definitions of ‘transportation’ and ‘harboring.'” He said these have “always been applied selectively: with aggressive prosecutions of ‘criminal’ networks, but worries that “now, the law may be applied to not only humanitarian aid workers but also to the millions of mixed-status families in the United States.” According to Warren’s attorney, Greg Kuykendall, the only thing Warren is guilty of is providing the men with “basic human kindness.”

According to Warren’s attorney, Greg Kuykendall, the only thing Warren is guilty of is providing the men with “basic human kindness.”

“This is a microcosm of this much bigger issue that’s at play right now,” says Jason De León, a professor of Anthropology and Chicana/o Studies at UCLA. De León also runs the Undocumented Migration Project, a nonprofit that researches undocumented migration between Latin America and the US. I talked to him about the significance of Warren’s case and the impact it could have on future humanitarian aid efforts at the border.

Mother Jones: Why do you think Warren’s case specifically has become so high profile?

De León: The severity of the charges was one of the things that really made this case more public. The prosecution is being incredibly aggressive—much more so than we have seen in previous cases. You had folks doing a lot of the same things that Scott Warren and [No More Deaths] were doing getting arrested for littering. Whereas now, rather than just go for this lower charge, they advanced it up to be issues of human trafficking. You hadn’t really seen that before.

Both sides are pushing for this case to be more public for different reasons. There was an interest in making an example out of Scott Warren. And at the same time, you’ve got all of these pissed off people who support migrant rights. Who don’t think humanitarian aid is a crime. Who also recognize that this is an important battlefield right now. And so this has to be high-profile so that people can understand that this is what the federal government is doing.

MJ: NPR recently reported that there’s been an increase in charges like Scott Warren’s where people are being federally charged with bringing in and harboring migrants, especially after former Attorney General Jeff Sessions ordered prosecutors to prioritize these cases in 2017. Can you talk more about the spike in these arrests under the Trump administration?

DL: Even before Trump, the antagonism between the Border Patrol and humanitarian groups like Tucson Samaritans and No More Deaths has really been ramping up with agents being very aggressive in terms of their harassment of humanitarian workers. Under Trump, you’ve seen folks who were already doing these aggressive things towards humanitarian groups now feeling emboldened. In a lot of ways, the anti-immigrant and racist sentiments we have seen amplified under the Trump administration are exactly the same things we’re seeing with the border patrol, except now there’s nobody keeping them in check. Now we’re seeing a much more concerted effort by the federal government to put an end to humanitarian work that’s been going on for close to two decades. It’s open season now on these humanitarian groups.

MJ: What messaging do you think this case sends to other humanitarian aid groups and just everyday people? What cultural and symbolic impacts do you see this case having?

DL: The federal government is trying to make people afraid to help folks. These are scare tactics. But I don’t think it’s working. If anything else, the Trump administration is emboldening activists and people who are fed up of dealing with this to be more public and be more vocal. There are a lot of Scott Warrens in the world—people who are willing to go to jail for their beliefs in human rights.

MJ: What legal precedent would be set if the federal government convicts Scott Warren?

DL: If they can make the charges stick, that would just embolden them to just keep doing it. But they’ve been trying to do that with migrants for a long time, charging them with felony reentry to slow them down and stop them from coming. We’ve seen that throwing the book at them hasn’t worked. Killing migrants in the desert has not stopped this flow of people.  Even if a legal precedent is set to start really coming after these humanitarian groups, I’m not totally convinced it’s going to work. We saw this with the sanctuary movement in the 1980s when they were charging pastors with harboring migrants because they knew these people were going to die if they were sent back to their home countries. No matter what the federal government throws at folks, they know that human life and caring for another individual is more important than any change in a federal law that they know is morally wrong.

We don’t live in a moment where being cautious about this issue is going to be helpful.

MJ: How has the US government’s Prevention Through Deterrence policy historically been applied to humanitarian aid groups?

DL: Migrants have been dying in the Arizona desert in high numbers since the mid-90s. As soon as locals started noticing this spike in death counts, they immediately started mobilizing trying to do whatever they could to help alleviate some of the sufferings. That involved leaving water for migrants, giving first aid. Of course, Border Patrol doesn’t like that because it undermines the primary goal of Prevention Through Deterrence, which is to slow migrants—whether that be through death or through physical suffering. Someone giving water and bandages to folks lies against the core mission of Prevention Through Deterrence.

I think Border Patrol has always thought of humanitarians as this sort of thorn in their side. Except now, they just feel like legally they’ve got a firmer footing to stand on because they’ve got the support of the White House to really come at these folks. You could not have done this under the Obama administration. Even though Obama was doing horrible things to migrants—deporting people and detaining them and doing all kinds of stuff—they were still, at least superficially, pretending to care about migrant human rights. Whereas now, you can put babies in cages, you can have kids die in custody, and nobody is blinking.

MJ: Is there anything that you feel has gotten lost in the coverage of Scott Warren’s case?

DL: A lot of people don’t understand that Prevention Through Deterrence is a border enforcement strategy purposefully designed to force migrants out into places like the Sonoran Desert where there’s a high likelihood of death. We’ve known that for a long time. It’s been publicly stated. We knowingly put people in harm’s way through this policy. We have killed thousands of people with the Arizona desert and the south Texas backwood, and yet no one seems to think that that is a crime. No one seems to think that that is something we should be prosecuting.

People have to understand that Scott Warren and others like him are reacting to a federal [policy] that has knowingly put people in harm’s way. At some point, there’s going to have to be a legal reckoning for the American government. The law, hopefully, will cut both ways and the people who have designed these policies and who continue to keep them in practice will eventually be held legally accountable for this loss of life.