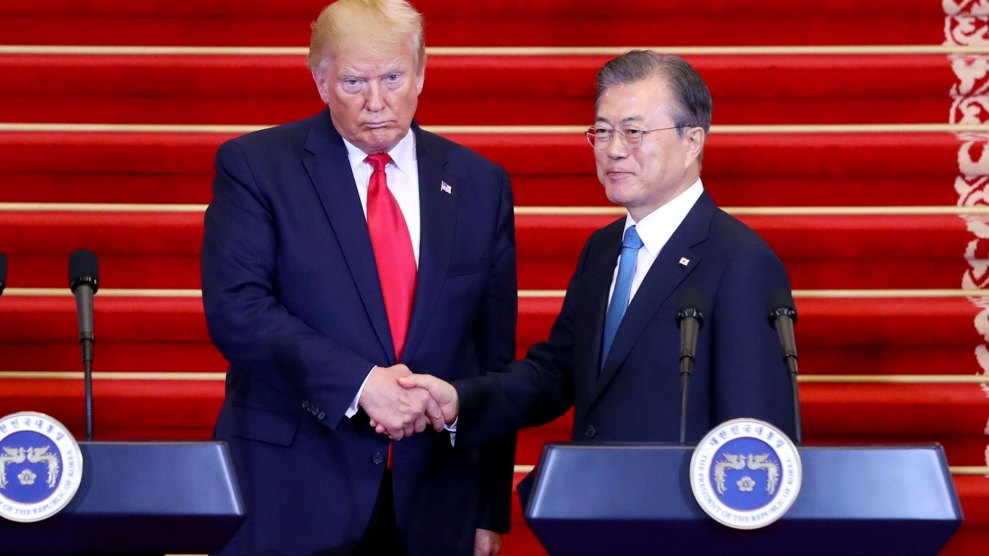 President Donald Trump is heading home after an eventful trip to G20 summit in Japan packed with enough bizarre statements and diplomatic gaffes to render the visit a disaster, if anyone weren’t already used to this stuff. Here are some lowlights.

Trump has heaped praise on Kim, a practice he continued during his G-20 trip. “There’s a good feeling,” Trump said Saturday of their ties. “I just think we have a very good relationship—the two of us.” Trump also had kind words for Mohammed bin Salman, the Saudi Arabian prince accused of ordering the murder of Washington Post columnist Jamal Khashoggi. “You have done a spectacular job,” Trump told the Saudi, known as MBS, who functions as the day-to-day ruler of his country, during a meeting Friday. Ignoring reported US intelligence assessments that MBS personally ordered Khashoggi’s gruesome murder, Trump said that “nobody so far has pointed directly a finger at the future king of Saudi Arabia.”

Trump also made light of Russia’s interference in the 2016 presidential election and the possibility that Moscow will again work to support his campaign in 2020 during a meeting with Russian president Vladimir Putin. “Don’t meddle in the election, please,” Trump said, jokingly wagging his finger at Putin, while avoiding eye contact with Putin as the two leaders appeared before reporters.

Putin laughed after hearing the translation. And the U.S. president shook his head and smiled. https://t.co/uNorQr7EzH pic.twitter.com/TcTRYlxGBX

Worse, Trump bonded with Putin over their mutual distain of journalists. Reminder: Putin is suspected of directing the murder of journalists. “Get rid of them,” Trump said. “’Fake news’ is a great term, isn’t it. You don’t have this problem in Russia, but we do.” Putin responded: “We also have. It’s the same.”

Trump walked into North Korea with that country’s dictator, Kim Jong Un, becoming the first sitting US president to so. Trump received little beyond a photo-op in exchange for an act of legitimating a tyrannical regime. But the visit also produced a bizarre moment when Trump’s new press secretary, Stephanie Grisham, jostled with North Korean security in an effort to ensure American reporters documented the meeting. CNN reported that Grisham got in “an all out brawl” with North Korean officials, and was bruised in the effort. Watch the confrontation:

Trump’ sympathy for Putin was exhausted by their exchange about election meddling and “fake news.” When asked Saturday about Putin’s claim that Western-style liberalism has failed, Trump not only didn’t defend the liberal democratic political tradition—majority rule tempered by individual rights—of the United States and its allies. Trump also seemed unaware that the liberalism championed by thinkers like John Locke and John Stuart Mill, which includes enthusiasm for capitalism, differs from the meaning of the term liberal when used to describe people like House Speaker Nancy Pelosi (D-Calif.) and the American left. He also seemed to interpret “Western” literally, by listing cities on America’s west coast: “I guess you look at what’s happening in Los Angeles, where it’s so sad to look, and what’s happening in San Francisco, and a couple other cities which are run by an extraordinary group of liberal people.”

In the same appearance, Trump, seemed unaware that the term “busing” is often used to mean a federally mandated busing to desegregate schools, rather than to describe the literal use of buses to transport children to school.

Trump also managed to find fault with the country hosting his visit, criticizing the U.S.-Japan security alliance. “If Japan is attacked, we will fight World War III,” Trump said on Fox Business News, adding: “But if we’re attacked, Japan doesn’t have to help us at all. They can watch it on a Sony television.” Whatever the failures of the US pact with Japan, it is a direct result of terms American forces imposed on the Japanese at the conclusion of World War II. Japan renounced war as part of a Constitution drafted in 1945 in consultation with General Douglas MacArthur, whom Trump often exults.  The Japanese government’s top spokesman, Yoshihide Suga, later pushed back on Trump’s remarks, stating that obligations are “balanced between both countries.” During his trip, Trump also repeated a frequent attack on Germany, saying the NATO ally “doesn’t pay what they’re supposed to pay.” This is a mischaracterization of a pledge by NATO members to devote two percent of their gross domestic product to defense.

Trump’s habitual violation of the norm of avoiding partisan commentary while abroad was apparent throughout his trip. Perhaps the most striking display came when Trump appeared to fully fabricate a claim about his political rivals, telling Brazil’s president, Jair Bolsonaro, that “there’s a rumor that the Democrats are going to change the name of the party from the Democrat Party to the Socialist Party.” It’s hard to know if Trump made this claim, which came during a conversation about Venezuela, as part of his ongoing effort to tar Democrats with the Socialist label, or to curry favor with the far-right Bolsonaro. Either way, it was clearly a lie.

Trump brought his daughter Ivanka with him, a decision that resulted in cringe-worthy instances of the younger Trump, who had no political experience prior to her father giving her job as a White House advisor, appearing to insert herself into pictures and conversations with world leaders. A viral video released Saturday by the office of French President Emmanuel Macron shows Trump joining a conversation between Macron, British Prime Minister Theresa May, Canadian Prime Minister Justin Trudeau, and International Monetary Fund head Christine Lagarde. The effort drew widespread mockery.

It may be shocking to some, but being someone’s daughter actually isn’t a career qualification.

It hurts our diplomatic standing when the President phones it in & the world moves on.

The US needs our President working the G20. Bringing a qualified diplomat couldn’t hurt either. https://t.co/KCZMXJ8FD9