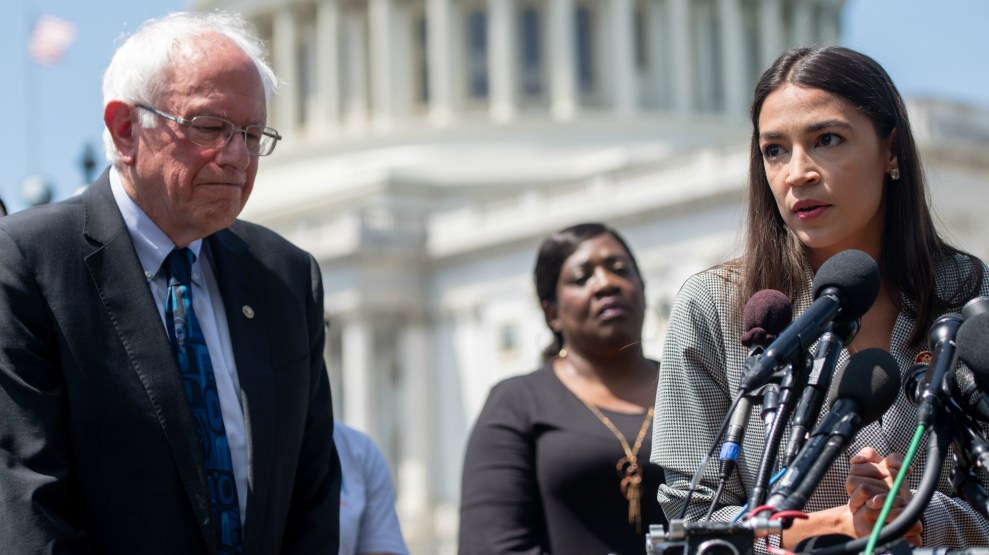 On Tuesday, Reps. Earl Blumenauer (D-Ore.), Alexandria Ocasio-Cortez (D-NY) in the House, along with Sen. Bernie Sanders (I-Vt.) in the Senate, will introduce a resolution asserting there is a climate emergency and demanding a wide-reaching mobilization to prepare for the consequences of climate change. They want to “restore the climate for future generations.”

“The global warming caused by human activities,” reads the draft Senate resolution obtained by Mother Jones, “has resulted in a climate emergency that…demands a national, social, industrial, and economic mobilization of the resources and labor of the United States at a massive-scale.”

In a letter to their colleagues, Blumenauer and Ocasio-Cortez called for Congress to declare a national climate emergency to “swiftly mobilize federal resources in response.” Most of the resolution’s text details facts about climate change, citing global warming trends and the resulting threat to public health and national security in the US. The resolution doesn’t provide specific recommendations for federal funding to fight climate change, but rather lays out the evidence of a climate emergency in order move the rest of Congress towards further action.

A spokesperson for Sanders contrasted the climate emergency resolution with President Trump’s past use of emergency powers. “President Trump has routinely declared phony national emergencies to advance his deeply unpopular agenda,” he said, adding, “On the existential threat of climate change, Trump insists on calling it a hoax.”

My colleague Jackie Flynn Mogensen interviewed experts earlier this year about what might happen if a president were to declare a national emergency over climate change. She wrote:

For Francesco Femia, co-founder of the policy and security research nonprofit Center for Climate and Security, declaring a national emergency over climate change would be so much of an authoritarian overstep that it isn’t even worth entertaining the hypothetical.

But Congress declaring such an emergency would be different, because there would be less concern about vesting the executive branch with too much power.

This new resolution is just one example of how the push for Congress to take the reins on climate change is gaining traction. Last month, more than 60 climate justice and environmental groups such as The Climate Mobilization, Zero Hour, Poor People’s Economic and Human Rights Campaign, and Extinction Rebellion, launched an online petition for Congress to declare a federal climate emergency.

Extinction Rebellion, a climate activist group, has organized protests around the globe and is demanding that Congress declare a federal climate emergency and make the resolution law. Sara Sokolinski, who works as an environmental researcher in DC and volunteers with Extinction Rebellion DC, said declaring a climate emergency “forces everyone to confront the reality and scale of the climate crisis” that she feels many have been avoiding.