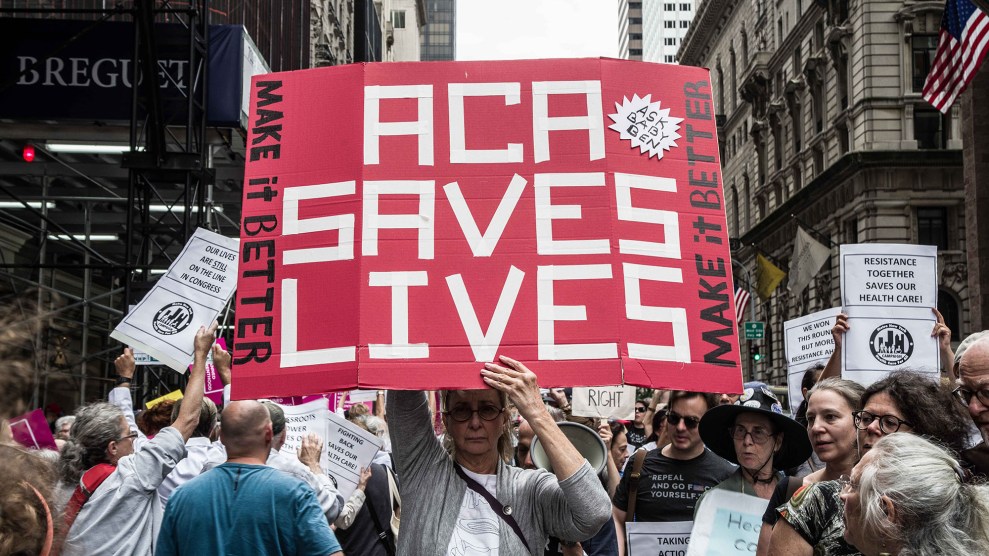 The fate of the Affordable Care Act remains uncertain following a hearing about the law at a federal appeals court in New Orleans.

The hearing concerned a lawsuit originally filed by Republican state attorneys general in a Texas district court in 2018, which alleges that the entirety of Obamacare should be invalidated because Congress used the 2017 tax cut law to zero out the financial penalty for the ACA’s individual mandate. In 2012, the Supreme Court upheld the ACA on the grounds that the individual mandate counted as a tax.

In December, a district court judge in Texas sided with the Republicans, and struck down all parts of Obamacare—everything from the law’s provision expanding Medicaid to the working poor and subsidies for middle-class families to buy insurance on the marketplaces, to mandates for calorie counts on menus—not just the individual mandate. If the Texas decision stands, 19.9 million more people in the US would be uninsured, according to an analysis by the Urban Institute.

Tuesday’s appeal of that ruling took place before three judges, two appointed by Republicans and one by a Democrat. While the judges seemed inclined to strike down the individual mandate, it is not clear whether they would invalidate the ACA as a whole, with a fair amount of the time at the hearing spent examining “severability”—essentially whether the rest of the law can remain on the books if the judges rule that the individual mandate is no longer constitutional. The questions came from the two Republican appointees, while the Democratic appointee did not ask any questions at Tuesday’s hearing.

The attorneys arguing that the law should be left untouched—one lawyer on behalf of states that want to see the ACA upheld, and one lawyer speaking for the Democratically-held House of Representatives—argued that Congress’ intent was clear when it only eliminated the individual mandate while keeping the rest of the ACA intact. But the Republican appointees asked skeptical questions on that point, a sign that they might not buy the severability argument. “How do we know,” Judge Jennifer Elrod asked, “that some members of Congress didn’t say, ‘aha this is the silver bullet that’s going to undo the ACA—or Obamacare if you prefer—so we’re going to vote for this just because we know it will bring it to a halt, because we understand the tax issue and it’s no longer a tax.’”

“Your honor, that would be imputing to Congress an intent to create an unconstitutional law,” Samuel Siegel, a lawyer for the state of California, replied.

The Trump administration has sided with the GOP attorneys general in the case. After the suit was filed last year, then-Attorney General Jeff Sessions filed a brief on behalf of President Trump saying that it supported overturning the individual mandate and other aspects of the law, including the ACA’s ban on charging higher rates or denying coverage for people with preexisting conditions. In March, the Trump administration went further and asked a federal court to approve Texas’ ruling that found the entire ACA unconstitutional—a divergence from his previous claims that he wanted to protect people with preexisting conditions and provide “insurance for everybody.”

Should the appeals court uphold the ruling that overturned Obamacare, the fate of the law will, once again, likely be headed to the US Supreme Court, and could be decided during the height of the next presidential election.

Listen to the full hearing below: