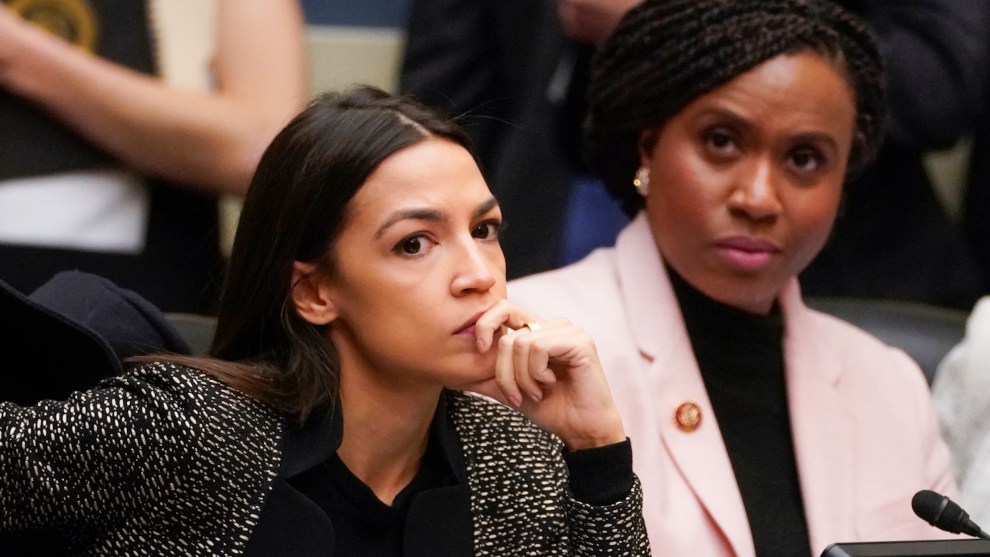 One of the most powerful Democrats in Congress officially has a 2020 primary challenger, and progressives are hoping the race will be a repeat of the political earthquakes that sent Alexandria Ocasio-Cortez (NY) and Ayanna Pressley (Mass.) to Capitol Hill last year.

“Our democracy is dying right before us, and we need members of Congress that are there to uphold the Constitution.”

On Monday, Alex Morse—the 30-year-old, openly gay mayor of Holyoke, Massachusetts—announced his bid to unseat Rep. Richard Neal, who represents the 1st congressional district in the western part of the state. Neal chairs the powerful Ways and Means Committee, which has jurisdiction over taxation, Medicare, Social Security, and welfare programs. Progressives have accused the 15-term congressman of using his position to slow-walk their priorities, and Morse plans to run as an unabashed proponent of Medicare for All and the Green New Deal.

As he kicked off his campaign, Morse didn’t hesitate to align himself ideologically with Pressley, AOC, and their fellow “Squad” members, Rashida Tlaib (Mich.) and Ilhan Omar (Minn.). “It’s not members of Congress that have been there for 20 or 30 years that are setting the agenda and changing the conversation and impacting where the country is going,” he told me. “It’s those members who have been there as short as seven months.”

Morse added that he’d “be thrilled to be welcomed into the Squad.”

Morse’s team already includes veterans of Pressley’s successful 2018 bid against 10-term Democratic Rep. Michael Capuano. Among them is Gina Christos, who served as Pressley’s finance director and is now working as a general consultant for the Morse campaign through Rivera Consulting, which provided political strategy for Pressley. That’s important, since Morse will have to work around the so-called “blacklist” that Democratic leadership imposed earlier this year to discourage consultants and vendors from signing on with candidates waging primary challenges against the party’s incumbents.

Morse’s outspoken progressivism stands in sharp contrast to Neal, whose voting record has consistently been somewhere in the middle of the Democratic caucus. According to David Greenberg, a member of the local grassroots group CD-1 Progressive Coalition, activists have repeatedly met with Neal to push him to support progressive priorities like the Green New Deal and Medicare for All, as well as to hold a town hall meeting in the district, which he hasn’t done since the fall of 2017.

Greenberg added that Neal appeared to harbor a particular dislike for his party’s outspoken progressive members, telling activists in April that he hopes “we are not going to have a progressive tea party” in Congress. A source close to Neal told me the congressman was trying to make the point that the tea party had caused Republicans to lose sight of what had won them their majority and that the 40 Democrats who flipped House seats in 2018 are very important for keeping President Donald Trump in check.

But keeping Trump is check is precisely what progressives say Neal hasn’t been doing. He’s irked liberals who want to see him use his position to conduct tougher oversight of the president. Neal had the power to demand Trump’s federal tax returns; he finally did so in April after months of demands from activists who thought he should have done so sooner. Recently, New York state passed a law allowing Neal to request Trump’s state tax returns, but Neal hasn’t accepted the offer, arguing that doing so would undermine his ongoing legal battle to get the federal returns.

Neal has racked up quite a rap sheet with progressives when it comes to policy, as well. In April, he drew heat for green-lighting legislation that permanently banned the Internal Revenue Service from developing its own free tax preparation software, a provision widely seen as a boon for tax preparation companies such as Turbotax and H&R Block. Neal dragged his feet on holding a hearing on Medicare for All legislation, and liberals have complained that he has thrown up road blocks to progressive plans to lower prescription drug prices and strengthen Social Security.

“Richie Neal had to be dragged kicking and screaming to do the most obvious thing in requesting Trump’s tax returns and hold[ing] hearings for Medicare for All,” said Adam Green, co-founder of the Progressive Change Campaign Committee, which will likely endorse Morse in the race. “He’s in the pocket of big corporations, in addition to being an entrenched member of the political establishment who isn’t in touch with the times.”

Defeating Neal won’t be an easy task: Neal is is a favorite son of Springfield, the district’s largest city, where he worked in city government for 15 years, including four years as mayor. He’s been a member of Congress since 1989 and was originally sworn in 26 days days before Morse was born. Neal has nearly $4 million in cash on hand and has won almost all of his races this century with more than 70 percent of the vote. In the 2018 primary, he steamrolled attorney Tahrirah Amatul-Wadud, who raised just $146,000.

But unlike Amatul-Wadud, Morse is no political newcomer. He’s been the mayor of Holyoke since 2011, when, at age 22, he ousted a 68-year-old incumbent who had been in politics for 30 years. Morse spent the spring of his senior year at Brown crashing on his friends’ couches and floors as he commuted back and forth between Providence and Holyoke to launch his campaign. His early political mentors include Rhode Island Rep. David Cicilline (D), the first openly gay mayor of Providence.

“I felt like there was all of this excitement and vision from the grassroots,” said Morse, when I asked about why he first ran for mayor. “But that energy and excitement and vision wasn’t matched by anyone in City Hall.” His reasons for challenging Neal are similar. “When I think about this race, I think about the people in this district who are being left behind and excluded from the process—who don’t feel like their member of Congress is responsive to their everyday lives,” he said.

Morse, who grew up in a working-class household in Holyoke, boasts an impressive list of accomplishments from his time as the helm of the once-bustling manufacturing center known for its paper mills. During his first months in office, he worked with HUD to halt the slated demolition of a public housing complex that served 467 people, something Morse described as a “bleak displacement project of a largely Puerto Rican community that knew no other home for generations.” He implemented a needle exchange program in response to the area’s crisis-level opioid epidemic, and he declared Holyoke a sanctuary city for undocumented immigrants.

In addition to backing Medicare for All and the Green New Deal, Morse supports opening an impeachment inquiry against Trump, another opportunity to draw a contrast to Neal. “I can’t purport to know the congressman’s strategy, but people are angry and scared,” Morse said. “Our democracy is dying right before us, and we need members of Congress that are there to uphold the Constitution. And if we don’t begin impeachment proceedings against this president, then I think it sets an incredibly dangerous precedent for any president that comes after.”

But in Morse’s view, the race will transcend national politics. “Western Mass, by all accounts, is far behind,” he told me, comparing declining economic conditions in the district to the exploding growth in Boston. “You can say you’ve been in Congress for 30 years and you have this power and seniority. But when you look at educational outcomes, air quality, asthma rates, the opioid epidemic here, people that are uninsured, what do we have to show for it?”