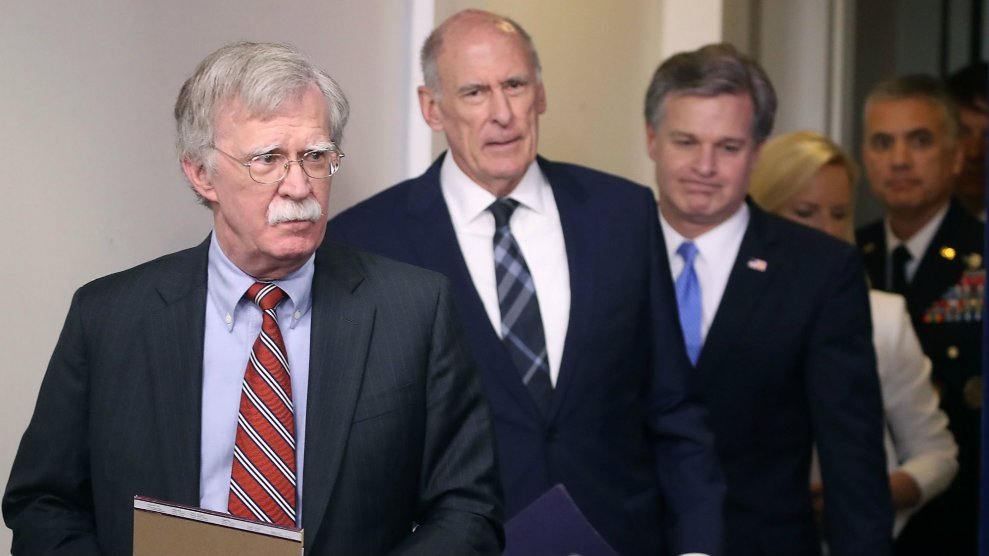 President Donald Trump is reportedly planning a shakeup of his national security team. The news site Axios reported Friday that Trump is planning to oust Director of National Intelligence Dan Coats and, along with several other outlets, identified the president’s preferred replacement as Fred Fleitz, John Bolton’s former deputy and a former CIA analyst best known for his association with a far-right, anti-Muslim think tank.

If appointed, Fleitz could play a key role in reducing the importance of the office itself—further empowering Bolton and Secretary of State Mike Pompeo in the process. A source told Axios that Trump wants to “downsize” the office and considers it “an unnecessary bureaucratic layer,” an argument identical to the one Fleitz made in a 2016 op-ed for the National Review. “The Office of the Director of National Intelligence has developed into a huge additional layer of bureaucracy,” he wrote, “with far too many officials, that has made American intelligence analysis and collection less efficient and more risk-averse.”

With the Pentagon lacking a permanent leader since December and the National Security Council being remade in Bolton’s hawkish image, the intelligence community remains one of the few areas of the national security establishment that thus far has maintained some independence from Trump, (who compared intelligence analysts to Nazis just nine days before taking office). And that may be one reason Trump is eager to shake things up. He has long marginalized Coats, a former diplomat and Republican senator from Indiana, who leads the nation’s 17 intelligence agencies and serves as the president’s senior intelligence adviser. Trump “doesn’t listen to” Coats anymore, Axios reported, though their apparent lack of communication has been evident for quite some time. At the Aspen Security Forum last year, Coats acknowledged that he was unaware of Trump’s invitation for President Vladimir Putin of Russia to visit the White House and would have advised against it. A Senate hearing in January, in which Coats and other intelligence leaders exposed several contradictions between the views of the intelligence community’s and that of the President, provoked a series of angry presidential tweets. In them, Trump derided Coats and other intelligence leaders and told them to “go back to school.”

The Intelligence people seem to be extremely passive and naive when it comes to the dangers of Iran. They are wrong! When I became President Iran was making trouble all over the Middle East, and beyond. Since ending the terrible Iran Nuclear Deal, they are MUCH different, but….

….a source of potential danger and conflict. They are testing Rockets (last week) and more, and are coming very close to the edge. There economy is now crashing, which is the only thing holding them back. Be careful of Iran. Perhaps Intelligence should go back to school!

Rumors of his impending ouster have circulated since February, when the Washington Post reported that Trump was “enraged” with Coats’ testimony at the Senate hearing and had grown “frustrated” with him.

Fleitz, through frequent appearances on Fox News, has aligned himself much more closely with Trump, but his longtime benefactor and ideological ally is Bolton, whose relationship with Fleitz goes back nearly two decades. Fleitz served as Bolton’s chief of staff in the State Department under President George W. Bush before going to work for him at the National Security Council last year, a position he left after less than seven months in October. His selection as Bolton’s deputy was sharply opposed at the time by Muslim and Jewish advocacy groups due to Fleitz’s affiliation with the conspiratorial Center for Security Policy, where he now serves as president and chief executive.

In 2015, he co-authored a report for the think tank that claimed more than 80 percent of American mosques are “incubators of, at best, subversion and, at worst, violence.” Fleitz distanced himself from the report’s most extreme policy recommendations last year—like stripping Muslims who support “shariah-compliant norms” of their citizenship—but has been sharply critical of Islam in other venues. During an April 2017 appearance on former professional baseball player Curt Schilling’s Breitbart radio show, Fleitz said, “We’re just not allowed to talk about radical Islam honestly in this country. Our young people are growing up—they have no idea of the threat that they’re facing from this ideology that’s not going to go away.”

Trump has already slammed the intelligence community for being “extremely passive and naive” on Iran, offering someone like Fleitz an opportunity to change the narrative. As the person in charge of preparing Trump’s daily intelligence briefing, Fleitz would play an outsized role in determining how intelligence regarding Iranian activities is presented to the president. Fleitz has spoken out strongly in favor of Trump’s Iran policy since leaving government and has urged him to not back down. Like Bolton and other hard-line Iran critics, Fleitz has accused the Islamic Republic of cheating under the terms negotiated by President Barack Obama’s nuclear deal. Coats’ office denied this characterization in its annual report on global threats, which stated that Iran had not broken its commitment up to that point. “The increased tensions with Iran are a result of Iran’s leaders attempting to use violence and terrorism to force President Trump to drop his maximum pressure policy,” Fleitz wrote in an op-ed for Fox News last month. “Obviously giving into these threats would be a sign of American weakness and amount giving into blackmail.”

Fleitz is not the only candidate Trump is reportedly considering to replace Coats. General Joseph Dunford, the outgoing chair of the Joint Chiefs of Staff, is also a candidate, Fox News reported, but Fleitz apparently discussed the job with Trump “as far back as February.” Fleitz told Mother Jones in an email that he is “not talking to the press right now.”

Coats denied a rift with the president in a statement to Mother Jones, saying, “I am focused on doing my job, and it is frustrating to repeatedly be asked to respond to anonymous sources and unsubstantiated, often false rumors that undercut the critical work of the Intelligence Community and its relationship with the President.”