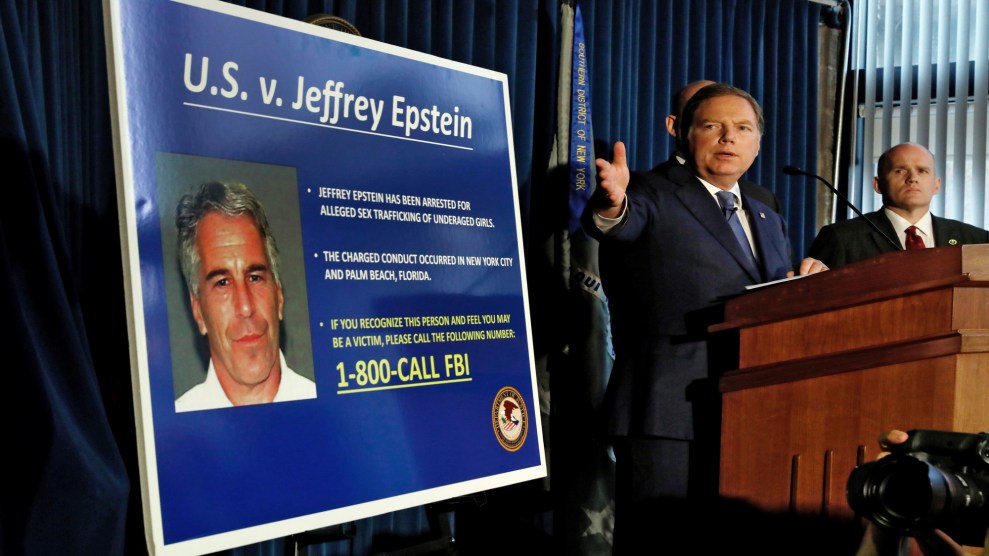 The 14-page indictment handed out on Monday alleged that Epstein paid girls for massages that then became sexual acts, and then would use them to recruit new victims. Epstein has pleaded not guilty to the charges. However, in 2008 Epstein did plead guilty to two counts of soliciting a minor for prostitution over similar allegations of molestation and abuse. The 2008 plea agreement which, was brokered by now Labor Secretary Alexander Acosta, has come under scrutiny in recent months for being too lenient.

While Epstein’s case is unique in terms of media attention, the issue of child sex trafficking in the United States is much more far-reaching. In 2017, the National Center for Missing & Exploited Children estimated that 1 in 7 runaways who were reported to their organization were likely sex trafficking victims. The government does not have an official estimate for how many people are trafficked, but the anti-human trafficking organization Polaris estimates the total number of victims in the United States to be in the hundreds of thousands.

Yasmin Vafa, executive director of Rights 4 Girls, an organization dedicated to ending gender-based violence against young women and girls in the US, spoke with Mother Jones about the broader issue of child sex trafficking and exploitation in the United States. Vafa’s work in recent years has been centered on combatting sex trafficking in Washington DC and on the federal level.

How do these girls end up being trafficked? What is the pipeline for this type of exploitation?

Unsurprising to us, the vast majority of child victims are black and brown girls, including gender non-conforming youth and LGBT youth. These are some of the most vulnerable children in our society. From the work that we’ve done, we know that many of them, if not most of them, have childhood histories of sexual and physical abuse, many of them have experienced some type of involvement with child welfare and many of them have come in contact with the juvenile justice system.

Do the cases fit the Jeffrey Epstein profile, or is this a more pervasive problem?

I think what’s really important to note is that the Epstein case, although it’s unique in how much attention it’s getting, it’s actually incredibly common. It’s something that we’re seeing everyday here in DC and across the country. Just using local numbers, child sex trafficking providers here in the DC area get five to eight referrals per week for children who are being bought and sold.

Why do you think child sex trafficking in the US doesn’t get that much attention outside of cases like this?

It’s a lot easier to think that this is hyperbole and exaggerated. It’s an uncomfortable reality. I think first of all, it’s one of those issues that is largely hidden in plain sight. People don’t often recognize the signs or what they’re seeing around them oftentimes gets mistaken for adult prostitution, people play it off as if it’s a victimless crime.

Do you think the race and the economic status of these girls has something to do with the lack of attention?

Absolutely. When you look at the vast majority of children who are impacted by sex trafficking and sexual exploitation, the vast majority of them are people of color. For instance, in places where even the percentage of people of color is incredibly low, they are over represented among victims. When you’re looking at somewhere like King County, Washington, for example, where black people only comprise 7 percent of the general population, they are 52 percent of all child sex trafficking victims.

How does being a victim of sex trafficking affect these children?

There has been a lot of research to show the lifelong consequences, both physical and mental, of experiencing sexual violence, but I think what we need to keep in mind is often times with child sex trafficking victims they’ve experienced multiple forms of abuse and violence before even falling victim to sexual exploitation. So we’re talking about complex layered trauma. What can be even more daunting for these survivors is that often times they are not treated as victims at all, so on top of experiencing layers of sexual abuse and trauma, they are often then stigmatized and re-victimized. There are so many factors here that can make their path to healing quite a challenge, but you know ultimately they are worthy and deserving of all the same interventions that we would provide any other victim of childhood sexual abuse or sexual violence.

This interview was edited and condensed for clarity.