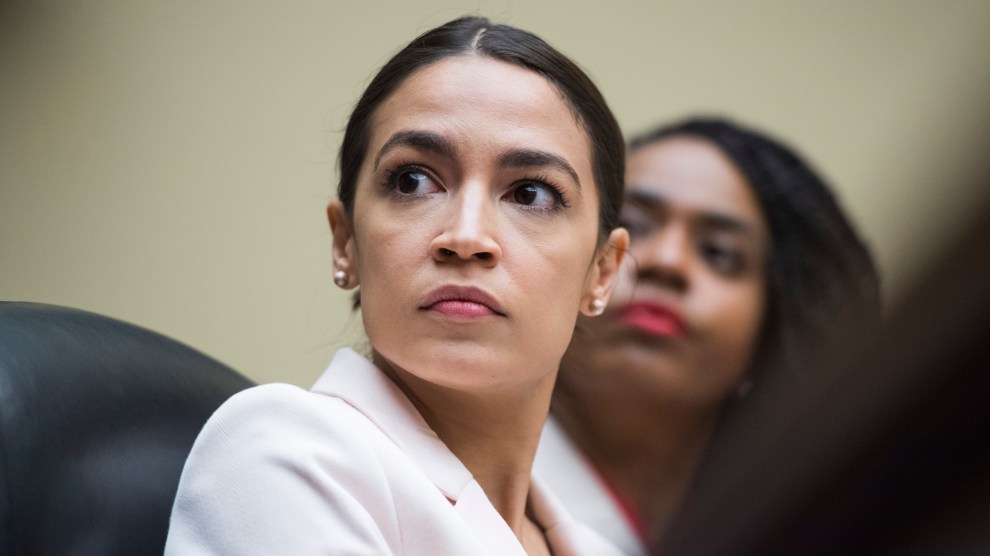 On Wednesday evening, Rep. Alexandria Ocasio-Cortez (D-NY) made headlines when she called House Speaker Nancy Pelosi “outright disrespectful” for the criticism she’s lately flung at the New York congresswoman and her so-called “squad” of freshman lawmakers—Reps. Ayanna Pressley (D-Mass.), Ilhan Omar (D-Minn.), and Rashida Tlaib (D-Mich.). “The persistent” mud-slinging, Ocasio-Cortez said in an interview with the Washington Post, read as an “explicit singling out of newly elected women of color.”

Rep. Lacy Clay (D-Mo.) accused his colleague of playing the “race card” and Pelosi said that other House Democrats “took offense to it” when reporters asked the House speaker about Ocasio-Cortez’s remarks during a Thursday news conference.

“It says, ‘Hey, we don’t want young Latinas in Congress.'”

Ocasio-Cortez later clarified that she didn’t believe there was any racial animus behind Pelosi’s comments. Still, it was clear on Thursday at Netroots Nation, the annual conference of liberal organizers that serves as something like a vision board exercise for the left, that many progressive organizers have taken the optics of the situation to heart. To them, Pelosi’s words signaled that women of color are not welcome in the Democratic Party, which is politically dangerous ahead of an election cycle that will depend on support from brown and black female voters to keep a Democratic House and flip the Senate and White House.

“It’s a slap in the face to people like me,” Alex Rojas, the executive director of the Justice Democrats, the left-wing group that helped to recruit and elect Ocasio-Cortez, told me. “It says, ‘Hey, we don’t want young Latinas in Congress. We don’t want to diversify and change the way things have been done.’”

Hers was a particularly powerful sentiment given that just a few hours earlier, Rojas had participated in a panel discussion titled “How Primaries Build Power,” focused on how primarying incumbents can be an invaluable way to build a Congress that more clearly represents the increasingly brown and black America it serves. The panel featured exclusively political activists and organizers of color, something its participants told me was done intentionally to draw attention to its premise.

During the panel, Rojas explained how the group’s support of Ocasio-Cortez was part of an effort to bring more lawmakers of color, reflecting their districts, into power. This cycle, Justice Democrats hopes to do the same in Texas’ 28th congressional district, where the group is backing Jessica Cisneros in her primary challenge to Rep. Henry Cuellar (D-Tex.).

Rojas’ take on the latest Pelosi-AOC dust-up was largely shared by the panel’s moderator, María Urbina, the national political director of Indivisible, which endorsed AOC and her three allies last fall. Urbina told me that Pelosi’s comments weren’t just a snipe at women of color—they were a bad look for the party. “Dismissing historic women of color does not recognize the tremendous leadership, vision, and contributions that these women bring not just to the Democratic party, but to the American people,” she said. “They’re speaking with clarity and courage, and they’re helping build a case for how we win next fall.”

“They’re speaking with clarity and courage, and they’re helping build a case for how we win next fall.”

Indeed, the issues nearest and dearest to the four female lawmakers have been at the center of the 2020 Democratic presidential primary. Single-payer health care, student debt forgiveness, and comprehensive immigration reform remain in the policy spotlight. Sens. Elizabeth Warren (D-Mass.) and Kamala Harris (D-Calif.), for example, have strengthened their campaigns with ambitious policies that align with the concerns Pressley, Ocasio-Cortez, Omar, and Tlaib share. Sen. Bernie Sanders (I-Vt.), meanwhile—who first brought many of those policies to prominence during his 2016 presidential run—has maintained his top-tier status by doubling down on them.

“The things that are coming from these new, prominent black and brown progressive folks resonate [with black and brown voters],” said Natalia Salgado, a senior political strategist with the Center for Popular Democracy, another progressive advocacy organization that also endorsed members of the squad last fall. “Folks are tired of being seen by the Democratic party as just a reliable vote, and for those who don’t vote anymore because of that, they see a new hope—someone who’s actually speaking to us. The Democratic party stopped speaking to us a long time ago.”

For its part, the Democratic Congressional Campaign Committee has made a commitment to actively recruit both candidates (and consultants) who reflect the diversity of the districts they hope to serve; it recently announced the launch of a multi-year, multi-million dollar effort to shore up engagement with younger voters and voters of color. But earlier this year, the DCCC sparked controversy when it announced it would refuse to work with political consultants and vendors who work for Democratic primary challengers. Groups like Justice Democrats, Indivisible, and other liberal organizations quickly dissented, declaring it an attempt to smother the party’s ascendant liberal wing that is less white than the incumbents the DCCC protects.

“One of the reasons we joined Justice Democrats and other movement leaders in [criticizing the DCCC’s move] is because people should choose their elected officials and not the other way around,” Urbina explained. “The reason why we criticized the DCCC in trying to discourage primaries is both because we feel it’s undemocratic and because it maintains a Congress that is white.”

The past week of potshots between Pelosi and the squad has turned long-simmering tensions into a full-on boil. The feuding began on Sunday, when the New York Times ran an interview in which Pelosi suggested that Ocasio-Cortez, Pressley, Omar, and Tlaib wielded little power in Washington. The comment had been in response to the group’s fury over House Democrats’ vote to pass the Senate’s version of a border money bill that did not contain sufficient protections for migrant children. Ocasio-Cortez, Tlaib, Omar, and Pressley were the only four lawmakers to not vote for a House version of the bill that did contain those provisions because they did not support the providing any funding for that could be used to detain migrant children or conduct deportations.*

“All these people have their public whatever and their Twitter world,” Pelosi said. “But they didn’t have any following. They’re four people and that’s how many votes they got.”

Ocasio-Cortez clapped back with a tweet directed at Pelosi. “That public ‘whatever’ is called public sentiment,” she wrote. In a closed-door Democratic caucus meeting on Wednesday morning, Pelosi admonished her party for openly attacking one another on social media over policy disputes. “You got a complaint? You come and talk to me about it. But do not tweet about our members and expect us to think that that is just okay,” Pelosi reportedly told her colleagues.

A key to fixing the dynamic, Rojas said, would be to increase the squad’s influence in the Democratic caucus. She said Justice Democrats plans to recruit and support candidates in 20 to 25 congressional races, and she hopes the group’s success will give AOC and her allies more sway to push back against politics as usual. “It’s my job to hold Nancy Pelosi accountable,” she said.

*This story originally stated that Ocasio-Cortez, Omar, Pressley, and Tlaib were the only four Democrats to not vote for the Senate version of the border budget bill. Roughly 90 Democratic lawmakers voted against the Senate bill.