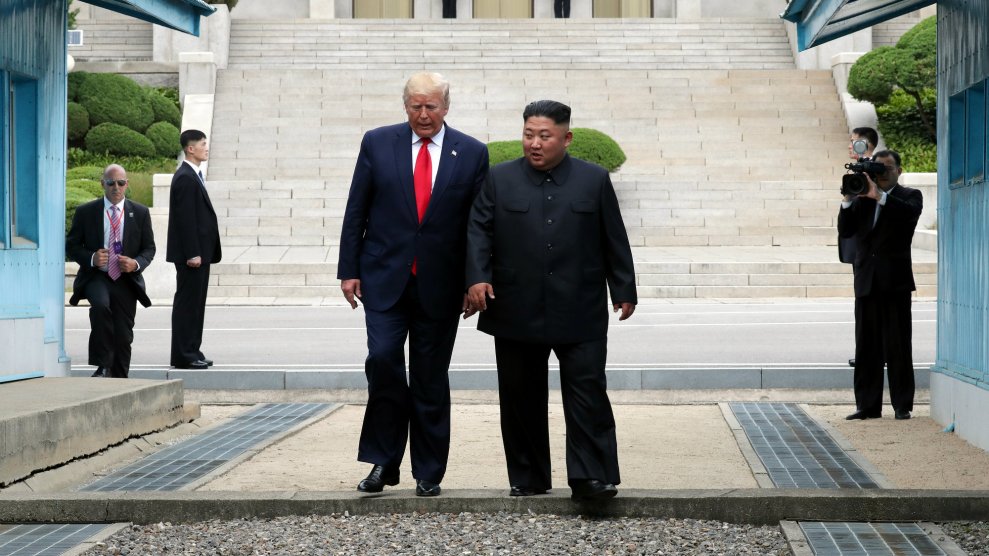 While President Donald Trump made history Sunday as the first American leader to set foot inside North Korea, the more important diplomacy was happening away from the television cameras and what were described as “overzealous” security officers. In advance of a possible third summit with Kim Jong Un, the New York Times reported Monday that US officials had come around to the “real idea” of “a nuclear freeze, one that essentially enshrines the status quo, and tacitly accepts the North as a nuclear power”—a dramatic concession from the administration’s previous insistence on the “fully verified denuclearization of North Korea.”

It’s not clear who within the administration supports the idea of letting North Korea keep its existing stockpile, and, so far, no one is rushing to take credit. Stephen Biegun, the State Department envoy to North Korea, called the Times story “pure speculation” in a statement, while John Bolton, the notoriously hawkish national security adviser, tweeted that it was a “reprehensible attempt by someone to box in the President.” During Trump’s visit to the Korean peninsula, Bolton was more than 1,300 miles away, meeting with Mongolia’s secretary of state.

“I have talked to Biegun and his entire team and I do not think this would be their instinct,” says Mike Green, Japan chair at the Center for Strategic and International Studies in Washington, who worked on Asia policy in the George W. Bush White House. “They know the history of the issue. They know this would be the biggest concession to North Korea ever.”

For all of Trump’s bluster on Twitter last year about eliminating the nuclear threat from North Korea, the country’s nuclear capabilities, which the Defense Intelligence Agency estimates to include “up to 60” nuclear weapons, still have not been weakened. A freeze would prevent the North from adding to its arsenal, while relieving the reclusive state of some sanctions. But most importantly for Trump, a deal would also give him an achievement to brag about on the campaign trail even though the escalation of tensions with the North have been largely a result of his threat to eliminate Kim with “fire and fury” in 2017. “It’s really the only option if Trump wants any tangible agreement with North Korea,” says Emma Ashford, an international security expert at the libertarian Cato Institute. “Even an imperfect deal is probably better than anything else you can get.”

“Even an imperfect deal is probably better than anything else you can get.”

The North has not conducted a nuclear test in more than a year, but there aren’t many other areas where Trump can claim to have negotiated a concession from Kim during their summits in Singapore and Hanoi. In Singapore, Trump told reporters the Korean People’s Army would return the remains of “thousands and thousands” of US troops, but only 55 boxes made their way to the US before the program was shut down earlier this year.

Meanwhile, Trump agreed to suspend training exercises with the South Korean military—a practice the North has long despised—and legitimated Kim, whose family has terrorized North Koreans for decades through a system of labor camps and extensive surveillance, as a capable, responsible world leader. “He wrote me beautiful letters,” Trump famously said last year. We fell in love.” More than a year after the Singapore summit, Kim has yet to turn over an inventory of the country’s nuclear materials, “claiming that would give the United States a map of military targets,” the Times reported.

Of all the members of Trump’s foreign policy team, the one most likely to be stewing with anger over this latest possible concession is John Bolton, who has opposed multilateral treaties of all sorts as a national security official under four Republican presidents, including a deal negotiated by President Bill Clinton to block North Korea’s path toward developing a nuclear warhead, which it eventually did years later. Once the US discovered evidence that North Korea had broken the terms of the agreement, Bolton wrote in his 2008 memoir, he found “the hammer I had been looking for to shatter the Agreed Framework.” Biegun, in a speech at Stanford University in January, showed a greater willingness to negotiate with the North Koreans, but even he evidently could not publicly embrace the idea of a nuclear freeze.

“We are not preparing any new proposals currently,” he said in a statement provided to Mother Jones. “No one on our team who knows anything would speak right now anyway.”

What Kim has proposed, in meetings with South Korean President Moon Jae-in and US emissaries in Hanoi, is an agreement to dismantle the country’s Yongbyon complex, which comprises a substantial, but not exclusive, role in manufacturing the country’s nuclear warheads, in exchange for relief from most United Nations sanctions. This concession would ultimately require independent inspectors to confirm the North’s compliance, which could lead to a greater understanding of the secretive regime’s nuclear arsenal, but it almost certainly would not slow the development of weapons in other areas of the country. “North Korea could continue to produce weapons-grade uranium for additional fission weapons at undeclared enrichment facilities outside of the Yongbyon complex,” wrote Gary Samore, a former US negotiator with North Korea during the Clinton administration, in an article for the website 38 North. “At best, dismantlement of the Yongbyon enrichment plant could reduce the rate of production of fission weapons, but would not stop it.”

That’s why American negotiators, according to Green, floated the idea in conversations before the Hanoi summit of urging Kim to expand the definition of what constitutes the Yongbyon site “to include all nuclear weapons capabilities.” Assuming that idea would be a nonstarter, the US is now pivoting toward the acceptance of North Korea, at least temporarily, as a nuclear state with an eye toward full denuclearization at some future moment. Non-proliferation advocates, for one, are rejoicing at even the prospect of this shift.

“This is the only way to get to a deal with any nuclear-capable state,” says Joe Cirincione, a former congressional staffer and adviser to the State Department. “You’ve got to go step by step.”