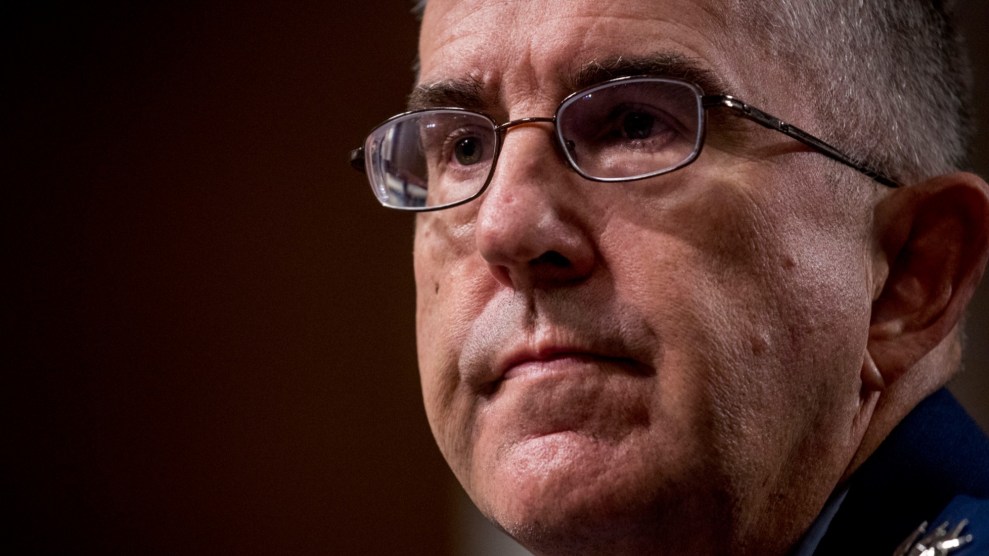 Gen. John Hyten appears before the Senate Armed Services Committee on Capitol Hill in Washington, Tuesday, July 30, 2019, for his confirmation hearing to be Vice Chairman of the Joint Chiefs of Staff. Andrew Harnik/AP Photo

On Tuesday, Donald Trump’s nominee for the nation’s second-highest ranking military officer, General John Hyten, began his confirmation hearing and was forced to respond to accusations that he had sexually assaulted a former aide. And based on the tone of Tuesday’s hearing, it looks like Senate Republicans are ready to ignore those allegations and confirm Trump’s nominee.

Last week, Colonel Kathryn Spletstoser publicly accused Hyten, who is currently head of the US Strategic Command, of sexual assault on multiple occasions while traveling together for work in 2017.

According to an account Spletstoser provided to the New York Times, on one of their work trips, Hyten went up to her room and “kissed her on the lips while pressing himself against her, then ejaculated, getting semen on his sweatpants and on her yoga pants.”

“If Gen. Hyten’s nomination moves forward despite me coming forward with this awful truth, it sends a very dangerous message to sexual assault victims across our military,” Spletstoser said in closed committee testimony obtained by Politico.

Despite, Spletstoser’s accusations, Senate Republicans, including Sen. Martha McSally (R-Ariz.), who revealed earlier this year that she was raped by a superior officer while serving in the Air Force, forcefully pushed to confirm Hyten’s nomination. “The truth is that General Hyten is innocent of these charges,” McSally said. “Sexual assault happens in the military. It just didn’t happen in this case.”

Hyten has denied Spletstoser’s accusations, telling committee members on Tuesday, “I want to state to you and to the American people in the strongest possible terms that these allegations are false.”

Democrats have also expressed some skepticism over Spletstoser’s allegations, but have continued to affirm that they should be taken seriously.

“The allegations against you are serious,” said Democratic Sen. Mazie Hirono (D-Hawaii). “and while we do not have corroborating evidence, the lack of it does not necessarily mean that the accusations are untrue.”

“Each of us has to weigh all of the evidence and testimony and make our own judgment abut whether or not you should get this promotion,” added Hirono.

Spletstoser, who was present at Tuesday’s confirmation hearing, told reporters that Hyten lied to the senators. “The bottom line is he lied about sexually assaulting me. He did it, he did it multiple times,” Spletstoser said according to Reuters.

Hyten is not the first Trump official to be publicly accused of sexual assault or sexual harassment. Trump’s pick for the Supreme Court, Brett Kavanaugh, was accused of sexual assault by Christine Blasey Ford, and three other women. Ford testified against Kavanaugh during his confirmation hearing, but he was ultimately confirmed. Trump’s current pick to lead the National Oceanic and Atmospheric Administration, Barry Lee Myers has been accused of overseeing a pervasive environment of sexual harassment while he was CEO of Accuweather. And, of course, 22 women have accused Trump of sexual misconduct.