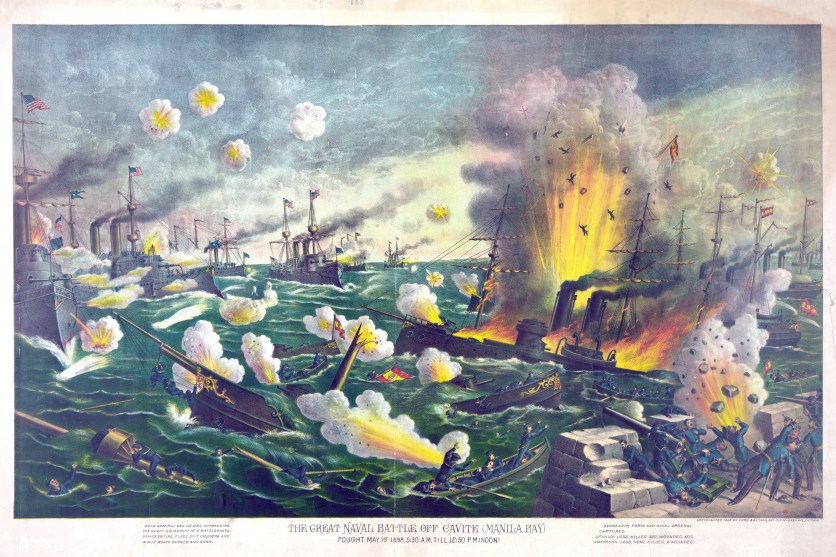 Battle of Manila Bay, Philippines, May 1, 1898, the first major engagement of the Spanish–American War. Those are Spanish vessels on fire. Photo12/Universal Images Group via Getty Images

Adapted from How to Hide an Empire: A History of the Greater United States.

America, as a shorthand for the United States, has a way of raising hackles around the globe. The Americas stretch from Canada to South America’s southern cone. Why should one country, accounting for a third of their population and less than a quarter of their land, have a nomenclatural claim on the whole hemisphere?

To many in the United States, such complaints—as voiced by Canadians and Chileans and any number of the 600 million other Americans—seem misplaced. America is right there in the full name of the country. What else would you call it?

Questions about the name of the country were there from the start. The official name of the country was the United States of America, but those 10 syllables don’t roll easily off the tongue. “Is the land to be forever called ‘United States,’ and its people ‘United States men?’” complained the doctor Samuel Mitchill. He longed for a “broad and universal appellation” and suggested Fredonia. The poet Philip Freneau, thinking along similar lines, proposed Columbia.

Some people were using America at the time, but not universally. George Washington didn’t use the word in his first inaugural address or in his farewell address. He called his country the United States or he called it the Union.

He did so for a reason. The word “America” was in some use, and the demonym “American” was common, but, as Mitchill noted, “these epithets equally belong to Labrador and Paraguay and their natives.” As Washington’s generation well knew, the United States didn’t cover the whole of the Americas. Hence their use of other names: the United States, the Republic, the Union.

Or Columbia, Freneau’s term. As the historian Caitlin Fitz has written, the early republic used Columbia to declare “symbolic independence” from Britain by aligning itself with the non-British Columbus, even though he’d never set foot in North America. King’s College in New York City changed its name to Columbia College in 1784, and the new capital as of 1800 was the District of Columbia. “Columbia,” “Hail, Columbia,” and “Columbia, Gem of the Ocean” were among the most popular patriotic songs of the 19th century.

The name Columbia not only broke with Britain; it also aligned the United States with newly freed Latin American republics. One of the largest was Gran Colombia, a short-lived state that covered a great deal of northern South America. As Fitz shows, the people of the United States initially greeted Latin American independence with enthusiasm, even naming some towns “Bolivar” after Simón Bolívar, the president at various times of Venezuela, Bolivia, Peru, and Gran Colombia. Today, there are towns called Bolivar in West Virginia, Ohio, Pennsylvania, and New York.

It was the United States’ leap into overseas colonialism that changed things. After fighting a war with Spain in 1898, the United States annexed not only the Spanish colonies of the Philippines, Puerto Rico, and Guam, but also the non-Spanish lands of Hawai‘i and American Samoa. This was its proud entrance into the imperial club, and the old names—the Republic, the Union, the United States—no longer seemed apt. It wasn’t a republic, it wasn’t a union (which suggests voluntary entry), and it included colonies as well as states.

As at the nation’s founding, writers proposed new names: Imperial America, the Greater Republic, the Greater United States. But the name that stuck was America. It had the virtue of making no reference to unions, republicanism, or statehood.

One sharp-eared writer heard the switch. “For some thirty years prior to 1898, while the adjective ‘American’ has been in general use, the noun ‘America’ has been extremely rare,” wrote a self-styled “Canadian (and therefore British) observer” named Beckles Willson. “One might, up to that annus mirabilis, have travelled five thousand miles and read a hundred books and newspapers without ever having once come across it; ‘United States’ being almost invariably the term employed by the American for his own country.” After 1898, he noted, “the best speakers and writers,” feeling that the United States no longer captured the nature of their country, switched to America.

The first president to take office after the war with Spain was Teddy Roosevelt, a determined imperialist. He spoke of America in his first annual message, and he used the term freely and frequently. Every president after him has, too. America was soon everywhere, including in the anthems. No more “Columbia, Gem of the Ocean.” “America the Beautiful” and “God Bless America” were the two new anthems to rise to popularity in the 20th century.

Imperialism brought America to the fore, resolving the country’s nomenclatural woes. Presumptuous, heedlessly expansive, it was a name to match the national character at the dawn of the century. Where earlier generations might have stopped short of fully embracing America in deference to the other American countries, the new imperium didn’t care. God hadn’t shed His grace on them, had He? The hemisphere was its to claim. To suggest otherwise was un-American.

Daniel Immerwahr is an associate professor of history at Northwestern University and the author of How to Hide an Empire: A History of the Greater United States. He has written for Slate, n+1, Dissent, and other publications.