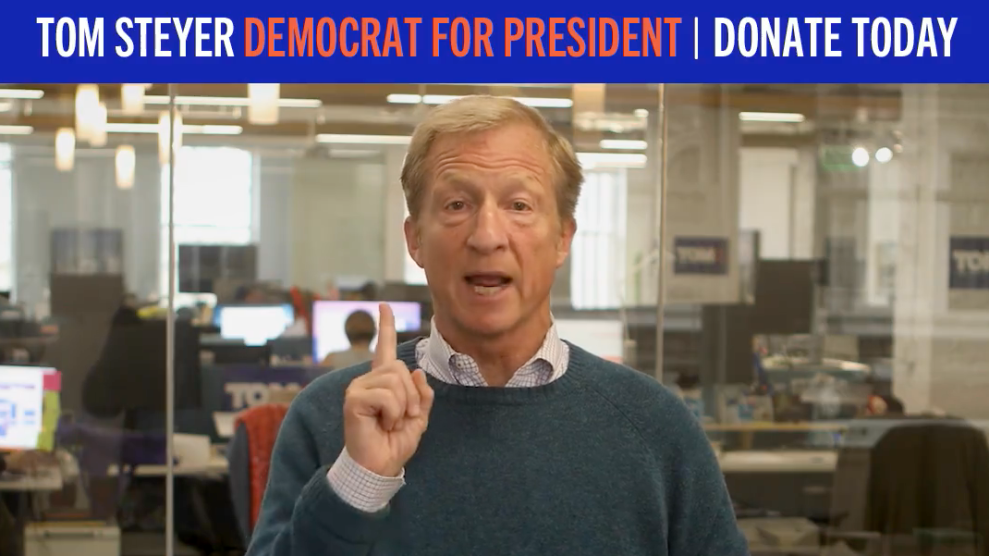 Tom Steyer has blanketed the airwaves for years, fronting ads for his political groups NextGen Climate and Need to Impeach. When he launched his presidential campaign in July, pundits were skeptical that the investor-turned-progressive-activist could attract enough support to break through in a field of more than 20 Democratic candidates. His most immediate task: Qualify for the upcoming debates by registering support from at least 2 percent of respondents in four separate polls and by accumulating 130,000 individual donors. So the California billionaire—who has appeared in Super Bowl ads—began shelling out millions of dollars to drum up attention and financial support.

It hasn’t quite worked out—at least not yet.

First, the good news for Steyer: His campaign says that it was indeed able to convince 130,000 supporters to give money to the wealthy candidate—an effort that may have cost Steyer more money than it raised. According to Politico, his team spent nearly $1 million in a single week on Facebook ads, many of which asked for donations of a $1.

But when the final polls establishing who would participate in the September debate were released Wednesday, it became clear that Steyer had missed the cut. He reached the 2-percent threshold in just three polls approved by the Democratic National Committee, one short of the requirement. And all of those were polls of Iowa or South Carolina; Steyer failed to score above 1 percent in any of the qualifying national polls. It’s a particularly dismal showing given that Steyer, according to an industry group, has spent as much as $12 million on television and digital ads since his campaign launched a month-and-a-half ago. For context, that’s almost twice as much as the total amount that New Jersey Sen. Cory Booker, who did qualify for the debate, spent in the first five months of his campaign. At least $2 million of Steyer’s advertising budget was spent on the Boston television market, trying to woo New Hampshire voters. Steyer’s campaign has spent more than $4 million on Facebook ads, according to the company’s database. Google’s database reports $1.5 million in Steyer ads.

While Steyer will be missing out on the September debate, he can still qualify for the October debate if he hits 2 percent in another poll. That’s what his latest Facebook ads focus on. “Zero DNC debate-qualifying polls in New Hampshire in over a month,” complains one such ad. “Add your name to tell the DNC to expand its polling criteria.”