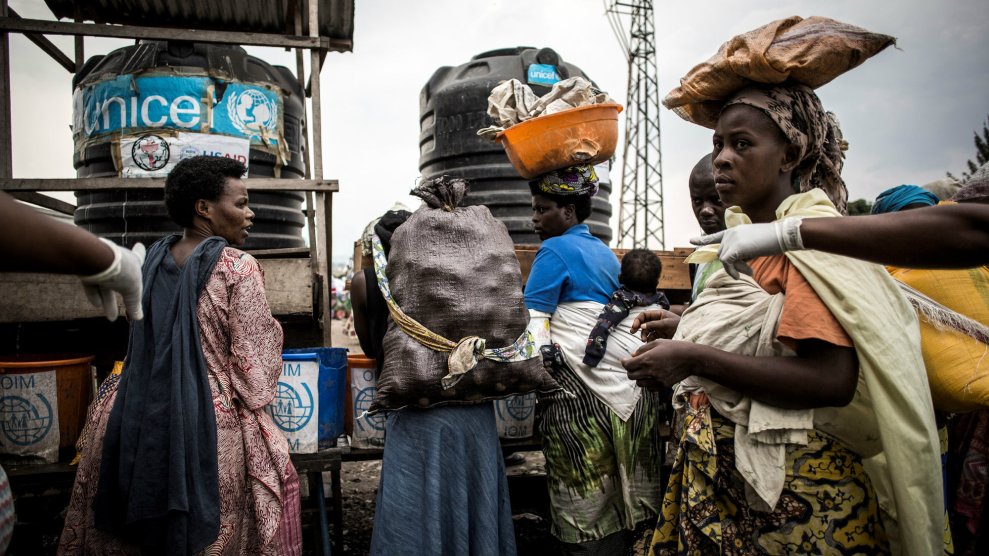 Women wash their hands at an Ebola screening station as they enter the Democratic Republic of the Congo from Rwanda on July 16, 2019 in Goma.John Wessels/AFP/Getty

Congo’s health ministry said Friday that the second-largest Ebola outbreak has spread to a third province in the country. The latest cases identified in South Kivu province follow deaths from Ebola in the city of Goma, a major transportation hub in North Kivu province.

Dr. Margaret Harris, from the World Health Organization’s Ebola response team, knows firsthand the difficulties of containing the illness, let alone stopping Ebola in eastern Congo, a place with ongoing violence. Based now in Goma, Harris started her career as a medical doctor but wanted her work to have a bigger impact, so she embarked on a career of explaining to the public how to prevent illness. After a switch to journalism, she became the medical editor at the South China Morning Post during Hong Kong’s SARS outbreak in the early 2000s. She returned to school for a masters in public health, worked for UNICEF from 2008 to 2009, and a year later joined WHO. For the Ebola response team, Dr. Harris focuses on “explaining to the international community what we do and why.”

There has been some real progress in coping with the outbreak of this deadly disease. In contrast with the outbreak from 2014 to 2015 in West Africa, when there were few drugs available to treat Ebola, scientists declared on Monday that Ebola was no longer incurable. This happened less than a month after WHO named the Ebola outbreak in Congo a public health emergency of international concern. Since November, researchers have been testing drugs for Ebola in a randomized, controlled trial as part of the emergency response to the outbreak in North Kivu and Ituri provinces, in eastern Congo, and two of the drugs tested in the trial were deemed highly effective.

I caught up with Dr. Harris over the phone. She spoke about how drugs are only part of the battle against the virus; the effects of the war in Congo on public health; and what has to happen to prevent the spread of Ebola.

What is the scope of this Ebola outbreak in eastern Congo?

We’ve had a very long outbreak, the second longest and second biggest outbreak ever in the world. As of August 11th, there were 2,831 infected. Sadly, 1,888 people have already died over the course of more than one year.

How do physicians even respond to a public health crisis of these dimensions?

First of all, you work out who’s got it. The next thing you do is work out everyone who has been in contact with that person. We try to vaccinate anyone who’s been in contact with someone with Ebola within 48 hours. It takes 10 days to totally resist the virus after vaccine, building up enough antibodies to help fight the virus. The new vaccine has a 97.5 percent efficacy rate. This vaccine can also work to make the illness less severe for people who are already sick. That’s one of the really encouraging things we’ve seen.

Now that scientists have discovered very effective drugs for treating people who have contracted Ebola, what are the next steps for getting the drugs to the people who need them?

We’ve got very effective drugs, but they’re only as effective as getting people into the Ebola clinics and getting them early. People are arriving far too late. The lives that are being saved with this treatment are being saved when people come early. The important point is what we’ve got is a tool that’s very promising, but community trust is key to stopping this outbreak or any future outbreaks. The idea is building up an immunity wall. If you’ve missed two or three people, you’ve missed two or three bricks in that wall.

Tell me about the biggest challenges for the Ebola response in this area.

This is the 10th outbreak in Congo, but it’s always been on the west side of Congo. And Congo is the size of Western Europe; it’s as different culturally as those countries are. It’s a bunch of very different places. Ebola had never been known here, and it took a very long time for people to realize it was Ebola. The health system is weak, so seeing people die of something is common. There were cases as early as May or March of 2018, but the Ebola outbreak wasn’t noticed until it started to affect health workers. The outbreak was officially declared this summer on August 1st.

How does the geography of eastern Congo affect response to Ebola?

There are a lot of areas around here that are difficult to access because there aren’t roads. Health workers have had to walk for miles carrying vaccines on their heads. If they’re lucky, it’s a place you can get to by motorbike, but often it’s walking.

What makes the Ebola outbreak in eastern Congo different from previous outbreaks of Ebola and other epidemics you’ve observed firsthand, like SARS?

The big difference is the level of violence against healthcare workers, and therefore uncertainty about whether we can simply perform the things we know we need to do to stop the outbreak. Crucial things, like going to a village and talking to people, listening to their concerns, learning about what they understand about the disease, and whether they are seeing potential cases of Ebola, can be impossible if the road is barred by armed groups or there is fighting going on in the area. Also the high level of distrust in health care and health care workers is unusual. People doing these jobs are trusted and admired in most societies.

If you could say anything to the public about both the importance of the new Ebola drugs as well as its limitations, what would you say?

This is an important advance. We know we have some treatments that can improve survival significantly. But, and this is big, the success of these drugs is dependent on people coming for treatment early, or coming at all. We are still seeing way too many what are called “community deaths,” where people die at home or in informal healthcare facilities.

How has conflict in eastern Congo posed challenges for responding to the Ebola outbreak for patients and for health care workers?

This is a region where there has been so much conflict, and there hasn’t been as much done to help the people. There aren’t good roads or running water. There’s a lack of access to schools and jobs. There’s not good health care. The first signs of Ebola are fever and headache and that could be anything. These are people who are used to having lots of illnesses and who don’t trust the health services. The people don’t think their own government can be trusted. So it’s not surprising that they say to health care workers, “We don’t believe you.”

Between January and August 4 this year, there were 198 attacks on health care workers, causing seven deaths and 58 injuries. It’s very different from other Ebola responses we’ve had to do. I got out of a car for a simulated evacuation a couple of weeks ago. Three hours later, I received a photograph of that car with bullet holes. The next team to do that simulation was shot at. The car was damaged, but no one in the car was harmed, which was an enormous relief.

Something like that can happen every day. Sometimes we have to stop and assess whether it’s safe. But we know every time we stop working in a specific area, the virus then has an opportunity to transit more freely. It’s like giving the virus a holiday.