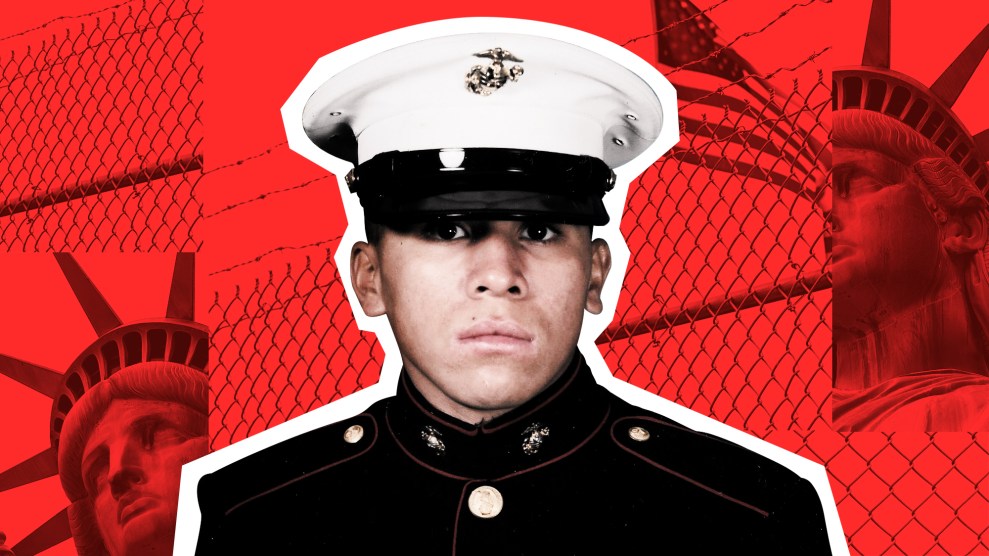 Jose Segovia Benitez has a tattoo of the Statue of Liberty on his chest. He served two tours oversees as a US Marine in Iraq and Afghanistan, and he was honorably discharged in 2004 after being hit by an explosive device. When he went back home to Long Beach, California, he had a traumatic brain injury, depression, anxiety, hearing loss, and combat PTSD—and he soon started drinking too much. He ended up in prison for domestic assault, among other crimes, and then—because Segovia Benitez is a green-card holder whose parents brought him to the United States from El Salvador when he was a toddler—he was sent to immigration detention.

On Monday, Segovia Benitez joined 14 other immigrant plaintiffs in a class-action lawsuit against Immigration and Customs Enforcement for “failure to ensure constitutionally adequate medical and mental health care.” The suit alleges long-term systematic failures by ICE and lays out multiple examples of detainees with a range of serious medical and mental health issues—including cerebral palsy, hypertension, bipolar disorder, and schizophrenia—who have experienced “outright denial of care, delayed care, and substandard care,” in violation of the Rehabilitation Act, court records show.

“Defendants have been informed repeatedly…that systemic unlawful conditions of confinement are rampant,” yet they fail to take steps to change that, the complaint argues.

While complaints of inadequate care inside the country’s nearly 160 immigration detention centers—many of which are run by private, for-profit companies—are not new, the lawsuit alleges that ICE is aware of the “horrific, inhumane” conditions and chooses not to fix them. “Defendants have been informed repeatedly—by their own inspection units, by other governmental inspectors and agencies, by nongovernmental entities, and by numerous other sources—that systemic unlawful conditions of confinement are rampant,” yet they fail to take steps to change that, according to the complaint filed in court by the Southern Poverty Law Center, Disability Rights Advocates, and Civil Rights Education and Enforcement Center.

“The fact that immigrant detention is supposed to be civil, and not punitive, is a distinction without a difference when it comes to how detained immigrants are treated,” said Lisa Graybill, deputy legal director with the SPLC. “At least twenty-six people have died in ICE custody since Trump took office, and tens of thousands have suffered as a result of the federal government’s abject failure to provide basic medical care at the facilities where taxpayers are spending billions to detain immigrants. More will suffer, and more will die, without court intervention.”

Segovia Benitez, 38, grew up in Long Beach and “always envisioned going into the Marines,” said Jessie Agatstein, one of his lawyers at Disability Rights Advocates. When he came back from combat and struggled, he sought help from the US Department of Veterans Affairs, she said. Segovia Benitez had been receiving the medical and mental health he needed, but over time he “had his run-ins with the criminal justice system.”

“Tens of thousands have suffered as a result of the federal government’s abject failure to provide basic medical care at the facilities where taxpayers are spending billions to detain immigrants.”

According to the Orange County Register, Segovia Benitez started the naturalization process when he was enlisted in the Marines but never obtained US citizenship. When he got out of jail in January 2018, Agatstein said, Segovia Benitez was picked up by ICE and brought to Southern California’s Adelanto ICE Processing Center, which last year was the subject of a damning report from the Department of Homeland Security’s Office of the Inspector General that claimed that the conditions at the facility represented “significant threats to the safety, rights, and health of detainees.”

During his time at Adelanto, Segovia Benitez has been placed in solitary confinement multiple times for three to five days at a time. He also has informed his doctors of intermittent chest pains, but “treatment has been delayed or denied,” court filings show. He spent the Fourth of July in the hospital this year after having chest pains, but even with a known heart condition, he said first responders arrived seven hours after he first complained to the medical staff.

“He’s very upfront about serving his time and feels like he’s rehabilitated and taken time to reflect,” Agatstein said. “But to be put in this detention facility feels like a second punishment, and the conditions are worse in immigration than they ever were in criminal custody.”

Segovia Benitez also complained that he is often the only person around who knows some American Sign Language and can help translate for deaf detainees at Adelanto. “He’s assisted several deaf detainees in their requests to access the accommodations and communication technologies to which they are entitled, and to which Adelanto has denied them access,” according to court documents.

“To be put in this detention facility feels like a second punishment, and the conditions are worse in immigration than they ever were in criminal custody.”

The 200-page complaint describes other stories of detainees with disabilities who are not given the proper assistance despite efforts to get help. Hamida Ali, a 28-year-old Sudanese refugee with limited English skills, has been diagnosed with schizophrenia but has not received proper medication for suicidal ideation. Before being detained, she was living in Utah with her three young children, who are all US citizens. Another detainee, an 18-year-old man with life-threatening food allergies, has not been given a special diet for more than six months and as a result has suffered seven severe allergic reactions, gone into anaphylactic shock, and required hospitalization. The complaint also highlights the case of José Baca Hernández, 23, who was working as a dishwasher and seeking a special visa for victims of crime in the United States. He’s blind from a gunshot wound he suffered several years ago, and he has had to rely on his cellmates and attorneys to read any documents or make written requests.

The plaintiffs in the case do not seek monetary damages, “but instead aim to reform the way our nation treats the human beings who have immigrated to the United States.”

An ICE spokesperson said via email that the agency “does not comment on pending litigation. That said, absence of comment should in no way be construed to suggest that ICE thinks any particular suit has merit.”

Correction: Jessie Agatstein’s name was misspelled in an earlier version of this story. We regret the error.