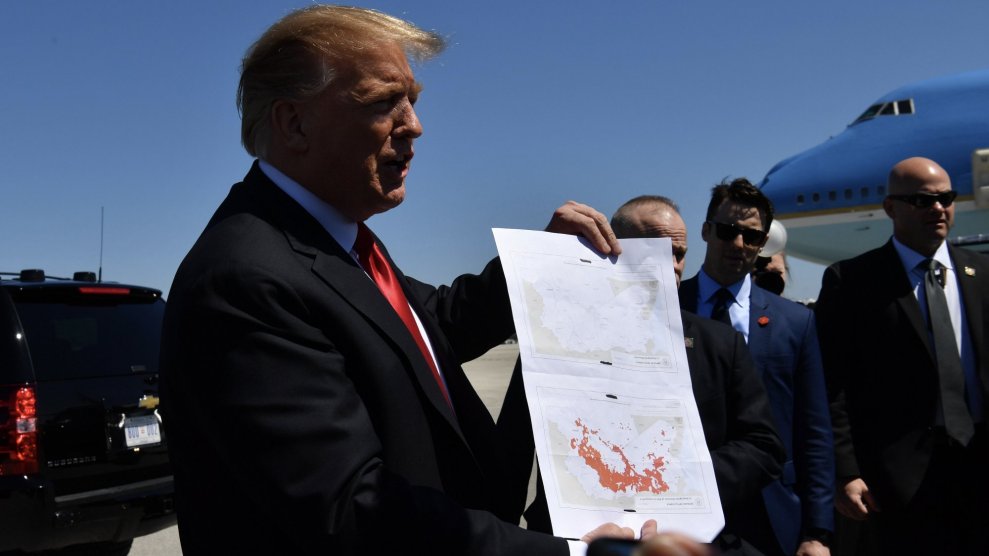 President Donald Trump uses a map to argue that ISIS has been defeated in the Middle East. Pentagon reports have disputed that assessment.Nicholas Kamm/AFP/Getty

Years before Donald Trump became president of the United States, he made his hiring preferences well known. “I value loyalty above everything else—more than brains, more than drive, and more than energy,” he said in a 2007 book. Throughout his presidency, he has not strayed from this personal rule, from his fateful meeting with doomed FBI Director James Comey, where he reportedly said, “I need loyalty, I expect loyalty,” to his recent efforts to replace Dan Coats as the director of national intelligence.

Trump evidently decided Sue Gordon, the longtime CIA veteran who had been slated to take over, would not prove to be a suitable replacement for his first intelligence chief. Gordon, by law, had to resign or be removed in order for Trump to make his own selection for acting director. On Thursday, she resigned in a letter that left no ambiguity over whose decision it really was. “I offer this letter as an act of respect & patriotism, not preference,” she wrote. “You should have your team.”

But will Joseph Maguire, director of the National Counterterrorism Center who Trump chose on Thursday, really be more of a loyalist than Gordon?

A former Navy SEAL and ex-CEO of a nonprofit that provides counseling and scholarships to the children of slain special operations service members, Maguire is not a partisan warrior in the same tradition as Rep. John Ratcliffe (R-Texas), Trump’s first choice whose nomination collapsed within a week amid criticism of his lack of relevant experience and the revelation that he embellished aspects of his law enforcement record. Ratcliffe was willing to defend and even echo Trump’s attacks against the intelligence community and did so during congressional hearings and frequent Fox News appearances.

In contrast, Maguire “has impressive military and NCTC management experience,” says David Priess, a former CIA officer and author of The President’s Book of Secrets, a book about the President’s Daily Brief. Trump too spoke glowingly of his pick, praising Maguire on Thursday for a “long and distinguished career in the military” where he “commanded at every level.”

Yet Maguire’s testimony last July before the Senate Intelligence Committee, as part of his nomination to lead the National Counterterrorism Center, reveals a nominee whose vision of the state of national security was often at odds with Trump’s positions. In his prepared remarks, Maguire rejected Trump’s assessment that the Islamic State had been wiped out in the Middle East, despite losing most of its territory to American-led forces. “Despite these setbacks, ISIS’s ability to launch an insurgency in Syria and Iraq and maintain a global network has not yet been sufficiently diminished,” Maguire said, “and the consistent tempo of ISIS-directed and ISIS-inspired terrorist activity is a reminder of the group’s continued global reach.”

Maguire’s views also diverged from Trump’s on the subject of international alliances, which the president has repeatedly bemoaned as costly and ineffective. “I’ve always felt that you can’t have too many friends on the battlefield.” Maguire told lawmakers in the July hearing. “And right now with the counterterrorism battlefield, we really need to have all of our partners and allies.” One of the arenas in which Maguire said allies play an especially crucial role is in countering Iran. “I will champion a US position that will support and encourage our European partners to join us in confronting Iranian maligned activities around the world,” he told Sen. Tom Cotton (R-Ark.). Trump, of course, angered US allies in Europe by withdrawing from the Iran nuclear deal in May 2018. Major signatories, like Germany and the United Kingdom, have stuck with it in defiance of the US.

Trump has frequently touted his administration’s role in weakening ISIS without acknowledging the group’s persistent power to launch guerrilla attacks. “We must not allow ISIS to return, or enter, our country after defeating them in the Middle East and elsewhere,” he tweeted in October 2017. “Enough!” Six months later, he praised his administration for “ridding the region of ISIS” and asked on Twitter, “Where is our ‘Thank you America’?”

Since Maguire’s testimony, the discordance between Trump and the intelligence community over ISIS has grown even wider. In December, Trump announced the withdrawal of most American troops from Syria given the group’s “defeat.” The decision contradicted several reports from the Pentagon’s inspector general that identified at least 20,000 ISIS fighters still active in the region. It also led to the resignation of James Mattis, Trump’s first defense secretary, whose resignation letter foreshadowed Gordon’s and expressed the president’s need for a cabinet member “whose views are better aligned with yours.”

“What we’ve seen time and again is that they can only fight that fight for so long,” says Mieke Eoyang, vice president of the national security program at Third Way, a center-left think tank, and a former congressional aide. “People can only be as good as the president lets them be.”

Even as a temporary official, Maguire’s time as director of national intelligence will be closely watched, given Trump’s prior attempt to install a loyalist with a thin resume in the position and Coats’ clashes with the president. Last summer, Coats warned of Russia’s attempt to interfere in the midterm elections in a way similar to their meddling in 2016 on Trump’s behalf. In a rare rebuke to the commander in chief, Coats also said he wished Trump had not met privately with President Vladimir Putin of Russia. Their simmering conflict escalated in January when Coats and other intelligence chiefs contradicted Trump’s views of Russia, Iran, and North Korea in testimony before the Senate. Trump’s response?

….a source of potential danger and conflict. They are testing Rockets (last week) and more, and are coming very close to the edge. There economy is now crashing, which is the only thing holding them back. Be careful of Iran. Perhaps Intelligence should go back to school!

Once Coats’ resignation takes effect on August 15, Maguire is expected to remain in the job at least through September as the Senate remains on recess until after Labor Day. Where he stands with Trump and whether he will provide intelligence that reflects the community’s honest assessment, and not Trump’s preference of politicizing their findings, will be closely examined by lawmakers, especially if Trump nominates him to serve permanently.