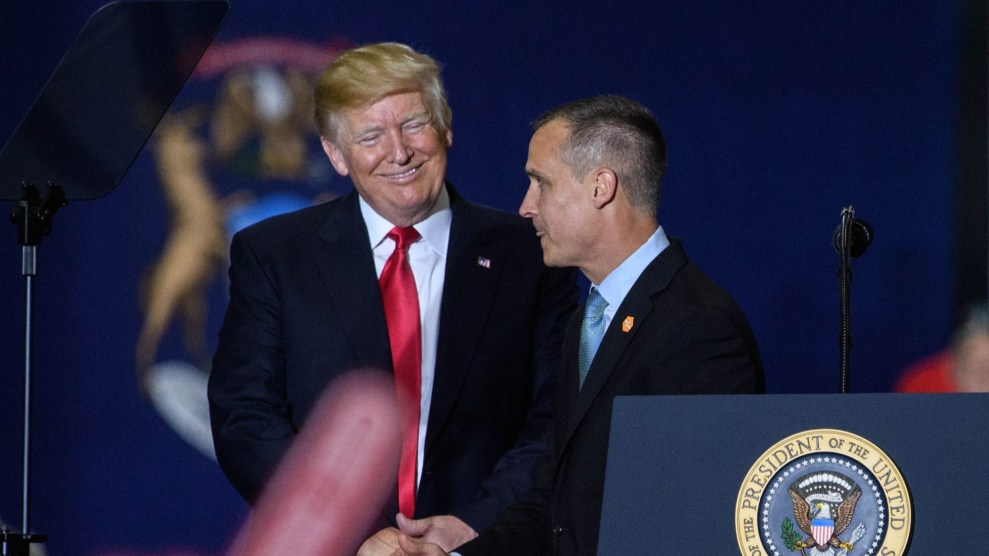 Corey Lewandowski, Donald Trump’s former campaign manager who on Thursday got an apparent endorsement from Trump for a possible Senate bid in New Hampshire, recently received something else: a subpoena from the House Judiciary Committee.

House Judiciary Chair Jerrold Nadler (D-N.Y.) announced Thursday that the panel subpoenaed Lewandowski and Rick Dearborn, a former campaign aide and White House deputy chief of staff for policy, for public testimony on September 17. The committee is investigating whether Trump obstructed justice by trying to shut down former special counsel Robert Mueller’s investigation into the campaign’s contacts with Russia.

Lewandowski and Dearborn were involved in efforts by Trump in 2017 to pressure then–Attorney General Jeff Sessions to reverse his recusal from the Justice Department’s Russia investigation and attempt to limit Mueller’s probe. According to Mueller’s report, Trump on June 19, 2017, asked Lewandowski to tell Sessions to announce that he was limiting Mueller’s probe to “investigating election meddling for future elections.” That would have meant an end to any investigation of the conduct of Trump and his aides. Lewandowski apparently did not deliver that message. In a private meeting a month later, Trump again pressed his former aide, who at the time was working to set up a lobbying practice, to push Sessions to restrict Mueller’s probe. If Sessions declined a meeting request, Trump said, Lewandowski should tell Sessions he was fired, according to Mueller’s report.

This is one of 10 instances of possible obstruction by Trump detailed in Mueller’s report. Like former White House Counsel Don McGahn, another key obstruction witness, Lewandowski and Dearborn are likely to resist the subpoenas, citing sweeping claims of privilege the White House is asserting. But Lewandowski, since he never worked in the White House, has a weaker case.

“It is clear that any other American would have been prosecuted based on the evidence Special Counsel Mueller uncovered in his report,” Nadler said in a statement.

Nadler said the Judiciary Committee plans “to hold hearings and obtain testimony over the coming months as part of its efforts to hold the President accountable as we move forward with our investigation into obstruction, corruption and abuse of power by Trump and his associates. This will help the Committee determine whether to recommend articles of impeachment against the President or other Article 1 remedies. No one is above the law.”

Lewandowski was ousted from Trump’s presidential campaign after clashes with other Trump advisers and an incident in which he was charged with misdemeanor battery for forcibly grabbing a reporter. That charge was later dropped. But the ex-aide has reportedly retained regular access to Trump.

Lewandowski has previously clashed with Democrats investigating the Trump-Russia scandal. He reportedly shouted and cursed at Democrats during a March 2018 interview by the House Intelligence Committee. “I’m not answering your fucking question,” Lewandowski shouted at one point, CNN reported.