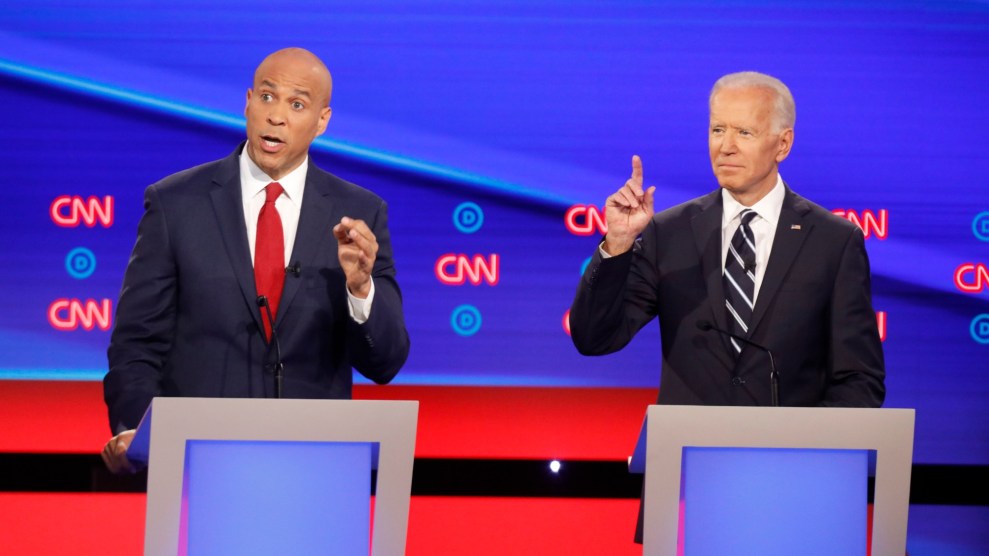 Cory Booker and Joe Biden during the second of two Democratic debates in Detroit.John Nowak/CNN via ZUMA Wire

During Wednesday night’s debate, Joe Biden completely dodged questions about his views on the record number of immigrant deportations carried out while he was Barack Obama’s vice president. But on Saturday, he took a shot at addressing the matter.

Speaking at candidate forum hosted by the American Federation of State, County and Municipal Employees in Las Vegas, Biden still would not say if he opposed or supported the Obama administration’s policy. But he did at least go beyond what he said Wednesday. In his comments Saturday, he seemed to imply that the deportations under Obama were an agency-generated policy that resulted from the White House’s focus on other issues. The former VP also argued that Obama generally imposed progressive immigration policies that were later scrapped by President Donald Trump. In addition, he said that when it came to deportations, Obama’s focus was on removing felons from the country.

This is a difficult issue for Biden. He wants to associate himself with Obama, who is beloved by Democratic primary voters, while avoiding an issue that continues to enrage many Democratic activists. As Sen. Cory Booker (D-N.J.) told him Wednesday, “Mr. Vice President, you can’t have it both ways.”

During the CNN-hosted debate, Biden said zilch when Booker and New York Mayor Bill de Blasio pressed him on deportations. “Did you say those deportations were a good idea?” asked de Blasio. “Or did you go to the president and say, ‘This is a mistake; we shouldn’t do it.’?” Biden responded by saying he was “vice president, not president,” and asserting that he keeps his recommendations to Obama private.

On Saturday, Biden tried to offer context: He explained that he and Obama were doing a lot of things. “We learned a lot in the process,” Biden said. “Look, when the president got elected, everything landed on this desk but locusts. We were about to go into a depression…We’ve forgotten just how bad things were. It took an enormous, enormous amount of time and energy just to get the recovery act passed, which the president asked me to manage.”

Biden also suggested the deportations were a policy the Obama White House allowed while expecting to eventually overhaul immigration laws. And he cited Obama’s program to give various groups of undocumented immigrants a period of “deferred action from immigration” or DACA. He also touted the White House’s support for an immigration reform bill that passed the Senate but never received a House vote.

“I think what happened was the president thought, we thought, at the beginning that we’d get…a more rational approach, for example, to way we deal for example with immigration,” Biden said. “By the middle of the term it was clear that wasn’t doing to happen and things changed. So what did he do? He came along with the Dreamers program. He introduced a piece of legislation to provide access for the 11 million undocumenteds.”

Pressed on what he discussed with Obama about the policy, Biden ultimately offered what he called a paraphrase: “The focus was on deporting felons,” he said. “It was not locking up people and separating them from their children…Comparing what we did with what Trump did, I think is just absolutely off the wall. It’s just not true.”

Biden was crisper when asked if he supports decriminalizing entering the country illegally, a stance held by former HUD Secretary Julián Castro and others. “I do not,” Biden said. “It will be an invitation to come.”