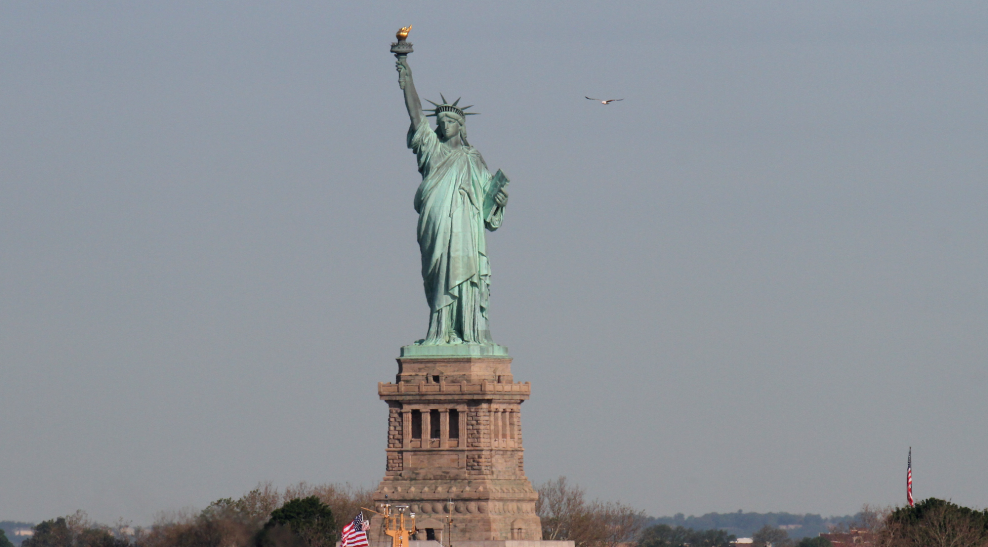 On Monday, the Trump administration announced that it was moving forward with a new policy blocking immigrants who are deemed likely to use government assistance programs, such as food stamps and Medicaid, from obtaining a green card. The rule, which resurrects a 19th-century scheme that punished poor immigrants, marks one of the administration’s most severe efforts to restrict legal immigration.

Amid intense backlash over the announcement, acting director of the US Citizenship and Immigration Services Ken Cuccinelli was asked Tuesday about how the new policy squares with the sentiments expressed in the iconic poem, “The New Colossus,” inscribed on the base of the Statue of Liberty.

“Would you also agree that Emma Lazarus’ words etched on the Statue of Liberty, ‘Give me your tired, give me your poor,’ are also a part of the American ethos?” NPR’s Rachel Martin asked on Morning Edition.

Cuccinelli, appearing more than prepared to be confronted with the verse, claimed that he did but pointedly revised Lazarus’ words to fit the Trump administration’s hardline immigration views.

“They certainly are: ‘Give me your tired and your poor who can stand on their own two feet and who will not become a public charge,'” he quickly responded. “That plaque was put on the Statue of Liberty at almost the same time as the first public charge was passed. Very interesting timing.”

References to public charges, of course, are not included in Lazarus’ poem. But here’s how Cuccinelli’s vision for America would work to slash legal immigration. As my colleague, Noah Lanard reported:

Immigrants applying for green cards, which provide permanent legal status and a path to citizenship, are already barred from receiving most government assistance. As a result, the new rule would rarely block people from getting green cards because of benefits they’ve already used. The change is dramatic because of how much leeway it gives federal immigration authorities to turn people away: Immigrants will now be punished if officials at US Citizenship and Immigration Services decide they’re likely to use government programs like Medicaid, food stamps, and housing assistance in the future.

This isn’t the first time that a Trump official has put their spin on Lazarus’ poem. In August 2017, White House senior adviser Stephen Miller, perhaps the fiercest proponent of the new public charge rule, got into a heated exchange with CNN’s Jim Acosta over the meaning of the Statue of Liberty.

The latest remarks are all but certain to inflame the condemnation pouring in from Democrats, including 2020 candidates, over the new policy. “Families shouldn’t be forced to choose between staying in our country and having access to basic health care and housing,” Sen. Elizabeth Warren (D-Mass.) said Monday, adding that she would overturn the rule if she became president. Sen. Kamala Harris (D-Calif.) assailed it as “indefensible.”

“Give me your tired and your poor who can stand on their own two feet."

A new rule would make it hard for immigrants who use public benefits to stay in US: https://t.co/Y08iLtCD69