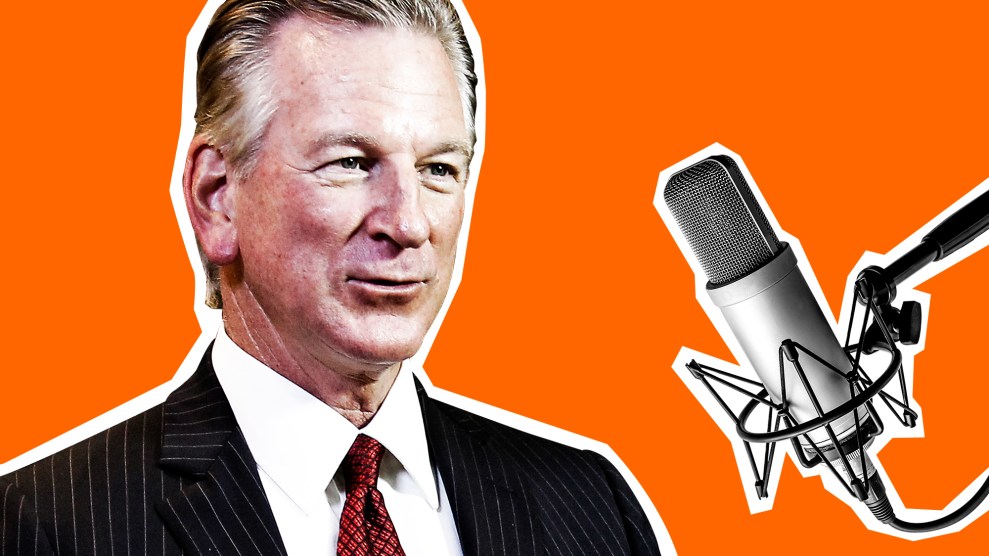 “I don’t need the job and I ain’t going to be politically correct,” said Tommy Tuberville recently at a campaign rally. Intentionally or not, it’s a pretty good summation of Tuberville’s approach to his run for US Senate.

Tuberville, best known for his 40 years as a college football coach—most notably at Auburn, where, in 2004, he went undefeated and finished second in the AP poll, a traditionally definitive ranking by the press of the best teams that year—is challenging Democrat Sen. Doug Jones in 2020.

Early polling has him in the lead among Republicans, and he’s garnering a folksy appeal, thanks in part to the reverence with which football in Alabama is regarded. He has built on this status by comparing driving all over the state and sleeping in his van to recruiting players. But he’s got some help from the big leagues, too: CBS reported that Sean Spicer is working on the campaign. (Roy Moore, a Republican who lost the Senate race in 2018 and has been accused of sexual misconduct, is also planning to run again.)

Tuberville is running as an outsider: wealthy and unowned, promising to win like a certain billionaire-slash-reality-TV-star occupying the White House. (He’s a fan.)

“I couldn’t sleep for a week after [Trump] was elected,” said Tuberville.

Tuberville fits the mold of Trumpian Republican. He begins his campaign appearances often in the same way: By complaining that cable news has been making him mad and confused and angry. “All you got to do is watch TV at night. This world and our country have lost it.”

Like Trump, Tuberville has long been in the spotlight, though his fame is admittedly more niche; in the South, SEC football coaches are household names. Like many coaches, his celebrity status is sustained thanks to consistent appearances on local sports radio shows, but he said he’s unconcerned with the trail of words he’s left behind. “Someone might bring up a bad business deal I made or how I might have grabbed a player on the sideline,” he said. “That’s nothing new. Everything on me has been out there for 40 years.”

Still, in addition to an amusing chip commercial and that time he was caught on a hot mic on ESPN calling someone a “dickhead,” it might be worth revisiting a few Tuberville bon mots.

The 1960s brought about the end of America

Tommy Tuberville does not like the 1960s. Specifically, when, in the ’60s, schools stopped letting kids pray (this did not happen) and Roe v. Wade was decided (it was actually decided in 1973).

First up, school prayer, a favorite Tuberville talking point. “When we took away prayer in the schools in the 1960s,” Tuberville said recently, “we killed this country. And we got to get it back.” It’s a common misconception among Christian conservatives—it’s not illegal for children to pray in schools, it’s simply that students cannot be pressured to pray at the school’s behest.

He often then segues into a false representation of Islamic schoolchildren: “There’s a double standard. We can’t pray in schools but we got a certain religion that’s come into this country and they can pray five times a day in our schools…without repercussions. But if we say the Lord’s Prayer you know we get suspended, our kids get sent home. That’s wrong. That’s going to change.”

But it’s not just school prayer in the 1960s—it is also legal abortion.

“Well, they’ve lost their mind on abortion,” Tuberville told a radio host when asked about the outcry against Alabama’s new law that bans abortion nearly altogether. “And if you look back when Roe v. Wade started, back in the mid-’60s, that kind of started us losing all of our laws in this country.”

Tuberville began by flirting with birtherism, the racist, false claim that President Barack Obama wasn’t born in the United States, in 2011. “Obviously there’s gotta be something on there that he doesn’t want anybody to see,” Tuberville said of Obama’ birth certificate on Fox News that year.

Now, nativism is showing up in his campaign issues. “Right now, they’re just coming over tens of thousands a day. They’re bringing drugs; they’re bringing diseases,” he said recently on an Alabama morning radio show. “They’re doing everything possible to come here, and you can’t blame them, but we got to get our Congress together and help President Trump do things necessary to get a wall up or some kind of fencing.”

and fight against the invasion of illegal aliens into our country.

He’s a businessman—unlike the socialists

The real problem with America today is that socialism is on the rise instead of Christianity, says Tuberville, though he uses the term “socialism” very loosely and as an insult. On one show, he called New York City Mayor Bill De Blasio “that communist mayor”; on another, he said former Vice President Joe Biden is an example of how Democrats “want to go to socialistic ways” simply because Biden proposed a healthcare plan that included raising taxes.

But the “liberal universities” are also to blame, according to Tuberville.

“These kids come out and they hear these things for four years from these liberal teachers that really have never had a job—all they’ve done is write books and write research papers and things, and they’ve never been in the real world,” he told a radio host.

Tuberville has been in the real world—it doesn’t get much more real than the business of college football. Before Auburn, he coached Ole Miss, where he said they’d have to carry him out of the job in a “pine box” (as in, dead). He left soon after for the Auburn job while still very much alive. It’s just business!

However, the Auburn Tigers had a dreary season in 2008—they went 5–7 that year, and to add insult to injury, Alabama walloped the team 36–0 in their rivalry game that year—and Tuberville resigned his position as head coach (though some staff members say he was fired). He eventually landed at Texas Tech in Lubbock, Texas. “I’m going to tell you what, that’s like going to Siberia,” he later said of the move on another radio show. “Somebody asked me, ‘What’s Lubbock look like?’ It looked like Iraq.” (BJ Symons, a former Texas Tech quarterback before Tuberville’s time, fired back, “If Lubbock was Iraq then you were Saddam Hussein and one evil, shitty-ass coach.”)

Tuberville then got an offer to coach at Cincinnati—it was said he left a dinner with Texas Tech recruits and never came back upon hearing about the opportunity. “This is a business,” he reminded sportscaster Dan Patrick on his show when pressed about his responsibility to the players he recruited. “And I know you’re saying it’s about the kids and all that, but it’s no different than when you’re working with people—there’s people that you work with [that leave], there are CEOs that leave.” (College players, unlike coaches and CEOs, are not paid.)

At Cincinnati, Tuberville yelled at a fan to “go to hell” and “get a job” in response to criticism about his performance as coach. He apologized. Later that year, after a 4–8 season, he resigned again.

Tuberville has those strong Christian values

Above all else, Tuberville is running on good old-fashioned Christian values. “[W]e’ve got to put Jesus and God before everything else. And if we don’t do that we’re going to be brought down to our knees again,” he said.

There are a couple such godly men in politics he respects.

“I think God brought [Trump] to us, and gave us the opportunity to have somebody just take the gloves off, start swinging, try to run these people back in their holes,” he said on another Alabama radio show. “I want to go to Washington to help him.”

“What a great person,” he said of Justice Kavanaugh.