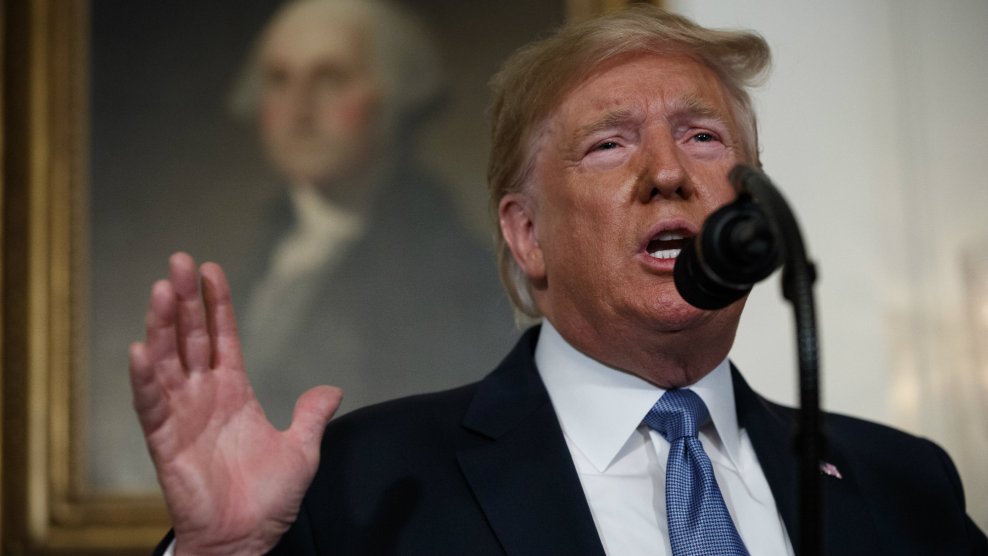 After back-to-back mass shootings left 22 people dead in El Paso, Texas, and nine people dead in Dayton, Ohio, President Donald Trump addressed the country Monday, expressing sympathy for the stricken communities, denouncing hate, and calling for the death penalty for perpetrators of these types of crimes.

“Today, I’m also directing the Department of Justice to propose legislation ensuring that those who commit hate crimes and mass murders face the death penalty,” Trump said, “and that this capital punishment be delivered quickly, decisively, and without years of needless delay.”

Mass shooters do not automatically face the federal death penalty under current law because murder is not always a federal crime. Those convicted of federal hate crimes and acts of terrorism, however, often do face the death penalty. But if Congress wanted to grant Trump’s wish to sentence mass shooters to death, all it would take is finding a reason to make it rise to the level of a federal crime, something the Justice Department is presumably looking at now.

Trump has a long history of calling for the death penalty. In 1989, he took out ads in New York papers demanding the return of capital punishment after five black and Latino teenagers were accused of raping a jogger in Central Park. After a number of years in prison, they were exonerated, but as recently as 2016, Trump remained convinced of their guilt. During his campaign, in 2015, Trump said that people who kill police should be sentenced to death, and last year he suggested that drug traffickers face capital punishment, despite constitutional obstacles that prohibit cruel and unusual punishment. Thanks to the 1994 crime bill, which expanded the federal death penalty, there is a wide array of crimes already eligible to be punished by execution, including certain drug crimes and others involving interstate commerce.

Trump’s announcement about mass shooters comes just days after Attorney General William Barr announced the end of the 16-year hiatus of the federal death penalty, which began when then-President Barack Obama requested that it be studied. Five men on federal death are now scheduled to be executed starting in December, though a number of legal questions must still be resolved.

Madeline Cohen, a federal capital defense attorney, points out that most crimes that people on federal death row have committed could have been prosecuted at the state level, with one exception. “There’s only one person on federal death row for terrorism,” she says, referring to Dzhokhar Tsarnaev, who bombed the Boston Marathon in 2013. Terrorism is already a federal crime, but in the wake of the El Paso and Dayton shootings, the FBI Agents Association called on Congress to make domestic terrorism one as well. Certain hate crimes are also federal, and Dylann Roof, a white supremacist who murdered nine black churchgoers in Charleston, South Carolina, in 2015, is the only person on death row for violating federal hate crime laws.

Less than half an hour before entering a crowded Walmart in El Paso and opening fire, killing 22 people and injuring dozens of others, Patrick Crusius, a 21-year-old white man, allegedly published an anti-immigrant manifesto that echoed racist and anti-immigrant language often employed by Trump. El Paso County District Attorney Jaime Esparza announced that his office would pursue the death penalty for Crusius. “I know the death penalty is something very powerful,” Esparza said on Sunday, “but on this occasion it’s something that’s necessary.”

For a mass shooter to end up on federal or state death row depends on various factors, and just because Texas is pursuing the death penalty, doesn’t mean the federal government won’t do the same. With or without congressional action, federal prosecutors could decide that the shooting violates federal hate crime laws and also push for capital punishment. Dylann Roof clearly was motivated by racial hatred, which was the factor that allowed federal prosecutors to seek the death penalty. He was sentenced to die in 2017. (He is not among those scheduled for death when the Trump administration begins federal executions in December.) South Carolina, which is a death penalty state, sentenced him to a life term after his federal trial.

In a similar case, federal prosecutors are also weighing capital punishment for Robert Bowers, the man accused of killing 11 people at a synagogue in Pittsburgh, because his anti-Semitic writings provided evidence that it should be considered not only a mass shooting but a hate crime. In 2015, Pennsylvania Gov. Tom Wolf issued a moratorium on executions, meaning he would not be signing death warrants for anyone on death row but not prohibiting prosecutors from seeking the death penalty. So far, Bowers is only facing federal charges.

One argument for capital punishment has always been deterrence, in this case there may be the assumption that executing mass murderers would prevent possible perpetrators from carrying out these violent attacks. But study after study has found there is no link between capital punishment and crime. To Madeline Cohen, resources would be more well-spent figuring out how to prevent these crimes in the first place. “Executions,” she said, “are not going to solve any of those problems.”