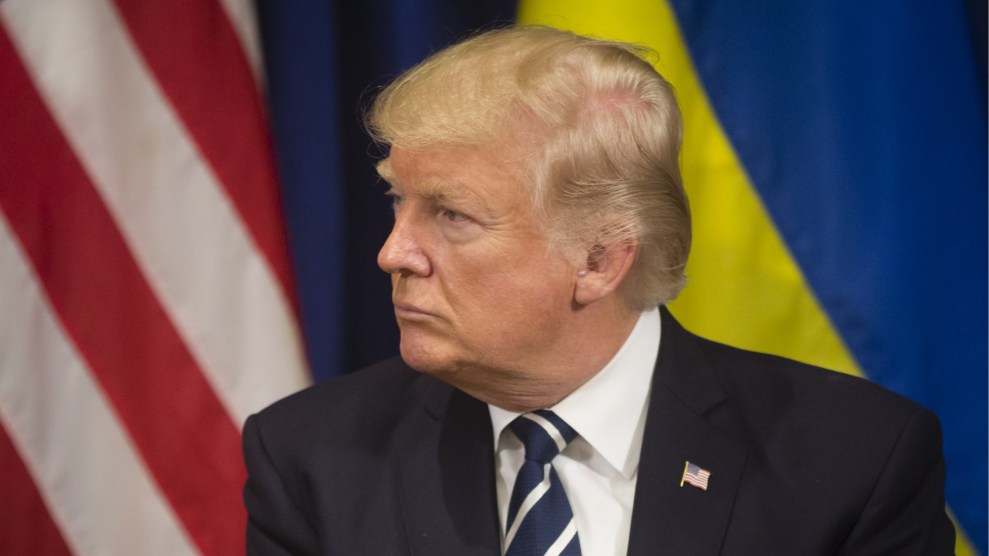 A five-page memo recounting President Donald Trump’s July 25 call with the leader of Ukraine was released by the White House Wednesday morning, adding new fuel to the scandal surrounding Trump’s efforts to pressure the eastern European country to launch an investigation into Joe Biden.

Trump, who is in New York for the United Nations General Assembly, agreed Tuesday to release the memo. A disclaimer on the document notes that it is not necessarily a “verbatim transcript” but is based on “the notes and recollections” of staffers assigned to monitor the conversation. (The New York Times cited senior administration officials who “said voice recognition software was used in preparing the document.”)

Trump’s request to have Volodymyr Zelensky, the Ukrainian president, open an investigation into a political rival is reportedly the central component of a secret whistleblower complaint into his conduct. The administration has refused to turn over the complaint to Congress, apparently in violation of the law. The controversy has roiled the federal government in recent weeks and paved the way for House Democrats to formally launch an impeachment inquiry Tuesday.

Trump’s focus on Biden was not the only troubling aspect of the call, which also touched on arms sales, special counsel Robert Mueller’s Russia investigation, and Zelensky’s decision to stay at a Trump property when visiting New York. Here are the four most explosive parts of their call:

Trump asked for an investigation into Biden

During the call with Zelensky, which took place just one day after Mueller testified before Congress, Trump urged the Ukrainian president to coordinate with Attorney General Bill Barr and Rudy Giuliani, Trump’s personal attorney, to investigate Biden, one of the front-runners for the 2020 Democratic presidential nomination. More to the point, Trump did this just days after freezing $400 million in military aid to Ukraine. (The Justice Department said Wednesday that Trump had not asked Barr to contact Ukraine and that Barr had not done so.)

Trump was referencing a discredited theory, long promoted by Giuliani, that Biden in 2016 urged Ukraine to fire its top prosecutor, Viktor Shokin, because of a state-run investigation into an energy company where Biden’s son, Hunter, was a board member. That investigation did not turn up any wrongdoing by Hunter Biden and was dormant by the time Biden pushed for the prosecutor general’s ouster. As the Washington Post noted in May, Biden’s effort to remove the prosecutor “was part of a longer push by the United States, Western allies and nongovernmental organizations such as the International Monetary Fund and World Bank” intended to “promote reform in Ukraine and remove a prosecutor who allegedly was turning a blind eye to corruption.”

Despite the complete absence of evidence that Joe Biden acted improperly, Zelensky said on the call that Ukraine’s new prosecutor “will look into the situation, specifically to the company” mentioned by Trump.

Rudy Giuliani is at the center of Trump’s Ukraine policy

Throughout the call, Trump frequently mentioned Giuliani, calling him a “highly respected man” and a “great mayor.” Giuliani has spent months urging journalists to look into Hunter Biden’s work in Ukraine and also recently spoke with one of Zelensky’s aides, according to the call memo released Wednesday. “One of my assistants spoke with Mr. Giuliani just recently and we are hoping very much that Mr. Giuliani will be able to travel to Ukraine and we will meet once he comes to Ukraine,” Zelensky told Trump.

The Washington Post reported Tuesday that Giuliani has been “more directly involved at nearly every stage of the entanglement with Ukraine” than other Trump advisers. Much of Trump’s national security team has been effectively sidelined on Ukrainian policy. According to the Post, even then-national security adviser John Bolton was “outraged by the outsourcing of a relationship with a country struggling to survive Russian aggression, officials said.”

The role of Trump’s personal attorney in the highly sensitive Ukraine relationship is unusual enough, as was Zelensky’s boast during the call that he stayed at a Trump property while visiting New York. But perhaps even more remarkable was the revelation Wednesday that Trump asked Zelensky to discuss the politically motivated investigations with Barr. In essence, it suggests that Trump views the US attorney general as another one of his personal lawyers and the Justice Department as an extension of his political operation.

“I would like [Giuliani] to call you,” Trump told Zelensky. “I will ask him to call you along with the Attorney General. Rudy very much knows what’s happening and he is a very capable guy.”

Trump’s fixation on Biden betrays a fear of his own vulnerability in 2020, but the president’s other comments to Zelensky show he clearly has not gotten over the controversy surrounding the 2016 election, in which he benefited from a systematic Russian interference effort.

Near the start of the call, Trump asked Zelensky to “do us a favor” by working with Barr to find out “what happened with this whole situation with Ukraine, they say Crowdstrike…The server, they say Ukraine has it.” CrowdStrike is the cybersecurity firm that initially identified Russian hacker groups as the culprits behind the theft of emails from Democratic National Committee in 2016. Trump appeared to be referencing an elaborate conspiracy theory alleging, falsely, that CrowdStrike had fabricated evidence of the Russian hack. In other words, it appears that Trump may still be refusing to accept the US intelligence community’s conclusion that Russia hacked the DNC to benefit his campaign.

Trump also told Zelensky that “a lot” of Mueller’s investigation “started with Ukraine”—likely a reference to the case against former Trump campaign chair Paul Manafort, who was convicted on charges relating to his consulting work for Ukrainian politicians. “Whatever you can do,” Trump added to Zelensky, “it’s very important that you do it if that’s possible.”

Michael McFaul, former US ambassador to Russia under President Barack Obama, wrote on Twitter that the exchange suggests Trump “and his team are still trying to relitigate/undermine the Mueller report and Russian interference in the 2016 election.”

Near the beginning of the call, the Ukrainian leader referred to his country’s purchase of US-made Javelin missiles. “We are almost ready to buy more Javelins from the United States for defense purposes,” Zelensky told Trump.

This statement is striking for two reasons: First, Trump has frequently commended countries such as Saudi Arabia and Vietnam for buying American weapon systems and has even suggested these defense purchases help mitigate unsavory actions like the murder of journalist Jamal Khashoggi. Zelensky evidently knows how important these commitments are to Trump.

Second, Ukraine is so dependent on these sophisticated missiles that last year, when the Trump administration was close to approving a previous sale of Javelins, Ukrainian officials halted several investigations relating to Manafort and withdrew an offer to participate in the Mueller investigation. “The cases are just too sensitive for a government deeply reliant on United States financial and military aid,” the New York Times reported at the time, citing Ukrainian lawmakers.

Given Trump’s knowledge of this situation, and his decision to block millions of dollars in military aid just days before the conversation with Zelensky, his next words were especially telling. After Zelensky mentioned the Javelins, Trump began his litany of requests regarding CrowdStrike and Mueller with these words: “I would like you to do us a favor though.”