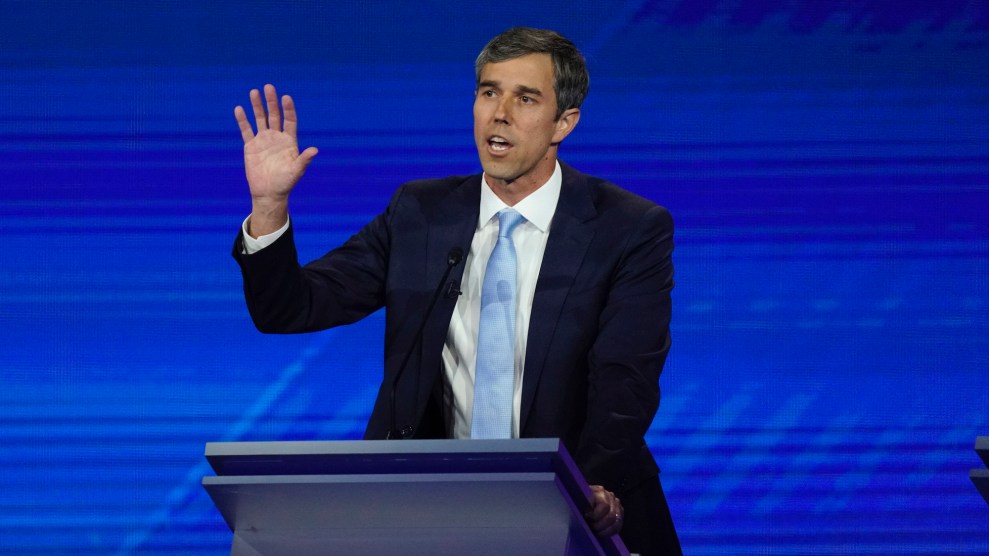 On the debate stage in Houston Thursday night, former Texas Rep. Beto O’Rourke promised to do the very thing that congressional Democrats have been promising all week not to do: Take away your guns. Well, some types of guns, anyway. “Hell yes, we’re going to take your AR-15, your AK-47,” O’Rourke said, noting that those assault-style weapons are designed for the battlefield and intended to inflict as much death and destruction as possible.

Q: Are you proposing taking away AR-15s and AK-47s?@BetoORourke: "I am, if it's a weapon that was designed to kill people on a battlefield …Hell yes, we're going to take your AR-15, your AK-47. We're not going to allow it to be used against our fellow Americans anymore." pic.twitter.com/gZlb39AAyF

This isn’t the first time O’Rourke has made this assertion, though it’s certainly the most prominent forum in which he has done so. When news broke that the perpetrator of the August 31 mass shooting in Odessa, Texas, had used an AR-type rifle to kill seven people, O’Rouke took to Twitter to declare, “Buy them all back”—a reference to the proposal he released in the wake of the August shooting in his hometown of El Paso that left 22 dead. That shooter used an AK-47-style assault rifle.

Since the El Paso shooting, O’Rourke drawn new attention to his a struggling White House bid with radical candor on the topics of gun control, racism, and immigration. That approach drew explicit praise from many of his opponents Thursday. And even if they haven’t quite matched O’Rourke’s rhetoric, many of them are backing the type of ambitious gun control legislation that previous Democratic presidential candidates had shied away from. Among the 10 candidates who qualified for the debate, each and every one of them supports an assault weapons ban (though some, like Sen. Amy Klobuchar, haven’t embraced mandatory buy-backs for existing weapons). Many of the candidates support even stricter measures that didn’t get a mention, such as licensing for firearms, which would require gun owners to register their weapons with the federal government.

The presidential candidates’ positions stand in stark contrast to the situation in Congress after a summer of mass shootings in El Paso; Odessa; Gilroy, California; and Dayton, Ohio. Since February, Senate Majority Leader Mitch McConnell (R-Ky.) has been blocking a House-passed bill to require a background check for every gun sale. Sens. Joe Manchin (D-W.V.), Chris Murphy (D-Conn.), and Pat Toomey (R-Penn.) have been in talks with the White House to come up with a compromise background checks proposal that President Donald Trump—ever the waffler on gun control—might agree to sign. “Right now on Mitch McConnell’s desk are three bills: Universal background checks, closing the Charleston loophole, and passing my bill to make sure domestic abusers don’t get AK-47s,” Klobuchar noted during the debate.

This week, the House Judiciary Committee advanced three more gun control measures—including a bill to enact so-called “red flag” laws that would allow law enforcement to take guns away from people who pose a risk to themselves or others. But congressional Democrats’ legislative package is nowhere near as ambitious as what the presidential hopefuls proposed in on the debate stage in Houston. Later this month, the House will hold a hearing on the various assault weapon bans that lawmakers have introduced, but there’s very little will among the Democratic caucus to actually pass them.

But in Houston, the 2020 hopefuls weren’t dealing with a GOP-held Senate or vulnerable Democratic lawmakers in swing districts. They’re dealing with a base that is sick and tired of congressional inaction in the face of repeated massacres. As conversation on the topic drew to a close, Sen. Elizabeth Warren proposed a tactical shift: Get rid of the Senate filibuster so that a simple majority can pass the measures that her NRA-backed Republican colleagues will not.